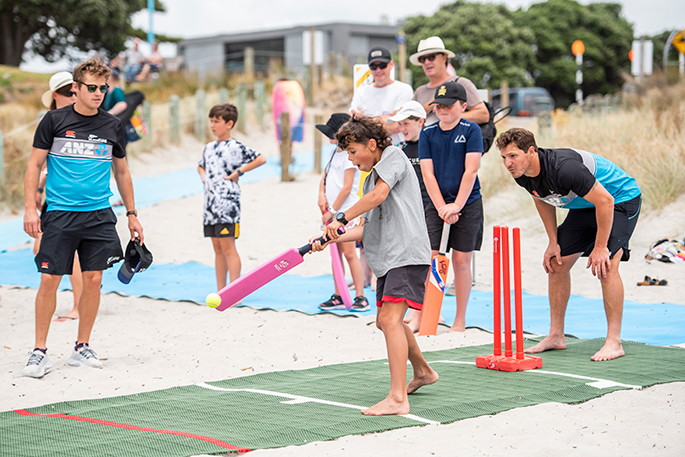 The Blackcaps traded grass for sand as they took time out of their busy training schedule this week.

Cricket fans got to meet some of the players as they played beach cricket on Mount Main Beach on Wednesday.

Nine-year-old Tana Jones was one of many children who got to take a turn at the bat during yesterday's game.

We love a bit of beach cricket! Who’s getting excited for the Boxing Day Test? The Breeze Tauranga 95.8FM Bay of Plenty Cricket

The Blackcaps are now preparing for their Boxing Day Test again Pakistan at the Bay Oval, before the New Year’s Test at Hagley Oval in Christchurch on January 3.

Following consecutive two-nil series wins over the West Indies this month and India earlier this year, Kane Williamson’s men sit just behind India in third on the WTC points table.

A series sweep against Pakistan and a heavy defeat for India in Australia would see the BLACKCAPS well placed to return to Lord’s in London for another ICC Final.

“It doesn’t get much bigger than a Boxing Day Test on your home ground,” the world’s third-ranked Test bowler says.

“The community have really got behind Bay Oval and to see a bumper crowd there on Boxing Day will be pretty special as a local player.

“The Test team have played some really good cricket of late and to have an opportunity to push for a World Test Championship Final is truly exciting.

“Pakistan are a dangerous side with class players throughout their line-up - so we know we’ll have to be at the top of our game.”