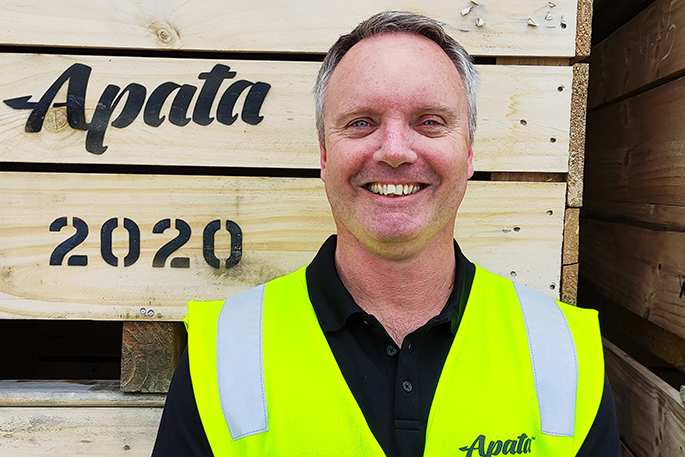 The primary industry has long provided careers for kiwis, but it continued to show job stability amid COVID-19 in New Zealand. When jobs in other sectors were hard to come by, it opened its doors for people like Jeffrey Benfell.

After 20 years in the travel industry, Jeffrey was made redundant from YOU Travel in Bethlehem just as the sector started feeling the ripple effects of the pandemic.

Turning lemons into lemonade, Jeffrey made a call to a friend who introduced him to the team at Apata.

He was promptly hired as a human resources assistant and started work on Monday, 23 March 2020, just as the country headed into lockdown Alert Level 3.

“The kiwifruit industry has always been one of the mainstays of the Bay of Plenty area,” Jeffrey says. “I knew there would be at least seasonal work in a packhouse, and I was lucky that it's worked out to be more than seasonal.”

Located in Katikati and Te Puke, Apata Group Limited is one of the kiwifruit industry’s largest fully integrated post-harvest operators. It provides both kiwifruit and avocado growers with their pack, coolstore and shipment facilities.

Apata is a far cry from High Street, Kensington, where Jeffrey first got into the travel industry working for giant Trailfinders in 1999.

It was in the UK he met wife Jana from the Czech Republic, and they had their two children Nicholas (16) and Amy (14). Wanting a quieter lifestyle for their young family, they headed back to Jeffrey’s homeland in 2007, settling in Tauranga.

Jeffrey continued to work as a travel agent in Bethlehem, which always required him to pay close attention to news reports across the world.

“I remember when the stories [about COVID-19] were first breaking in late October 2019, and I thought, this is going to be a lot worse than a lot of people are thinking,” Jeffrey says.

“Once [COVID-19] started spreading, then going into North America and Europe, it looked like only a matter of time before it would hit Australia and then us in New Zealand.”

While a change of career and industry would scare most, Jeffrey jumped right into the new role, which came at an opportune time.

“[Before being made redundant], I was actually looking for a job that meant I wasn’t just achieving something, but I would be doing some good.

"Working in the kiwifruit industry has brought my feet back to the ground, and I appreciate just how lucky we are in New Zealand.”

After spending the first couple of days in planning for the company to meet the Government’s social distancing requirements, Apata was back up and running as an essential business.

“It was pretty chaotic, but it was managed chaos, and Apata made sure that everyone was looked after,” Jeffrey says of the family-friendly company.

“They alleviated a lot of staff's fears and gave them the option to keep going or step aside.”

As his role covers the full scope of human resources, from recruitment to attendance, Jeffrey was able to transfer many of the skills he’d learnt from his decades in customer service.

“In the travel industry, you have to wear so many different hats and be able to multitask. One person could be wanting to do something in Asia or Africa, and the next person could want a cruise around the Arctic, so you've got to be able to think quick,” he says.

“That’s also a big thing in human resources – you've got to be able to think on your feet but take the time to give the right answer.”

But it’s Jeffrey’s love of working with people that makes his new role the perfect fit. “If someone needs a job, or is struggling, we can look after them,” he explains.

“There were a few people during the lockdown period who really did need to get into the kiwifruit industry [to support themselves], and we were able to welcome them with open arms.”

From the orchard to the supermarket, kiwifruit requires a variety of skilled workers for its farm to plate journey.

“Almost anyone can work in some capacity in kiwifruit,” Jeffrey explains.

“For stackers, it's quite a physically demanding job. For graders, it's mentally focused. And for tray preparation and packers, it takes a lot of skill, thought and speed.”

As Apata specialises in kiwifruit alongside avocados, it also provides sustainable job options in its post-harvest packhouse.

“Because we have both, it keeps a lot of our people in very good employment for ten months of the year.”

For Jeffrey, there’s plenty to love about his new job; from the genuine people at Apata to the fact he’s no longer sitting behind a desk for eight hours a day. Not to mention it involves learning something new every day about food production.

“It's been in the Bay of Plenty for 40 years, but the growth is just incredible,” he says. “In New Zealand, we're fortunate to have our horticulture, viticulture, seafood and forestry. We've got a lot of roles that will be sustaining the country for a long, long time. You can put your stake in the ground, and you know you've got a long-term career if that’s what you’re looking for.”