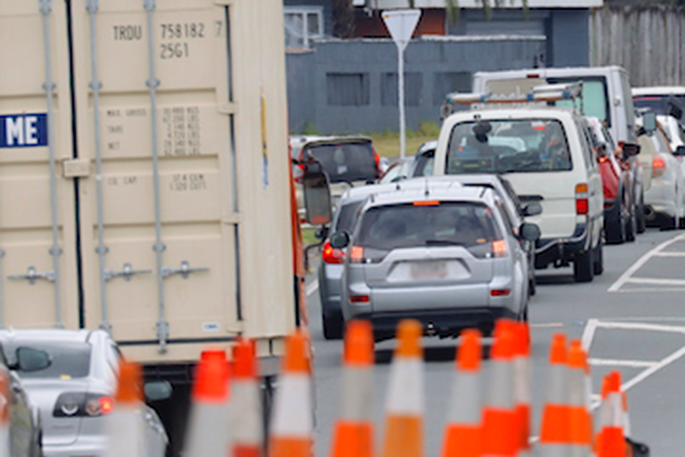 Higher than normal traffic volumes are expected on the roads in the next few weeks. File Image/SunLive.

Road rage, break ins and stolen vehicles can all contribute to a stressful Christmas, so AA Insurance is urging Kiwis to exercise kindness, courtesy and caution over the break.

According to the AA Insurance Lifestyle and Driver survey over a third of Kiwi drivers say that they’ve experienced road rage over the Christmas period, either from themselves or others, especially those aged 18-34 (52 per cent).

“It’s been a particularly stressful year, and with everyone now staying in New Zealand over the Christmas holidays there will be more of us on the road this year,” says AA spokesperson Amelia Macandre.

“Let’s make an effort to embrace the Christmas spirit a little more this year and be kinder and calmer on the roads.”

This extends to car park etiquette too, which means keeping to the road rules, checking before opening car doors and carefully choosing where to do so.

Nine in 10 Kiwis says they do these things most of the time, yet sadly this didn’t extend to putting away trolleys, with 31 per cent saying their car had been damaged by a supermarket runaway.

One AA Insurance customer learnt the hard way, when a witness saw a man let go of a trolley which promptly rolled into his car and caused over $1,600 worth of damage to the guard and wheel.

The man who caused the damage had a quick look at the damage, then swiftly left the scene without leaving a note. Sadly, his behaviour appears to be the rule rather than the exception.

In the majority of cases where a driver has damaged another parked car, they fail to own up and leave their details (83 per cent).

“There has always been a disconnect between what people say they’ll do and what they actually do when it comes to owning up to causing an accident, and this year’s results haven’t changed since last year,” says Amelia.

On the flip side, was the percentage of Kiwis reporting their items stolen from their parked cars during the year, which fell from 78 per cent last year to 66 per cent this year.

However, this is little consolation to the 14 per cent of respondents who had their belongings stolen from their cars over the Christmas season.

One family had gone to the beach and left their valuables wrapped in a towel in the car. After returning from their swim they found their items – a phone, gold necklace and wedding ring worth $3500 – had been taken.

In another example, a tradie had returned from his holiday a couple of days after Christmas to discover his work van had been broken into and all his tools, worth $11,500, stolen. Thankfully his small business insurance cover had him back up and trading by New Year.

Others weren’t so lucky - not only having their contents taken, but their cars too. Over the Christmas period 11 per cent of survey respondents had their car stolen.

“Our survey shows the most popular spot for cars to go missing is from the street on which they’re parked (37 per cent). So, if you have one, put your car in the garage, or at least off-street, or under a streetlight where it’s more visible,” says Amelia.

“And if you do leave items in your car, don’t tempt thieves be leaving them within view – keep Christmas shopping in the boot of your car or out of sight. Better yet, take it with you when you leave. You wouldn’t leave a pile of cash or expensive jewellery sitting in full view in your car, and Christmas shopping can often be just as tempting.”

Drive according to the road rules. Indicate to let people know where you’re headed, use your mirrors to see other drivers/pedestrians before reversing. Try to be courteous and keep your cool.

Most drivers like to park as close as possible to their destination, so make a point of parking a bit further away from the mall entrance.

Park away from where people are most likely to leave their trolleys, including trolley bays, pavements closest to the store’s entrance, and traffic islands.

Don’t shop during peak hours when car parks are at a premium. Early morning, or later into the evening should be less congested.

Leave the car at home and take public transport instead, shop online, or get all your main shopping done early.

Always lock your car, no matter where it’s parked. Keep your keys with you and use your alarm and/or immobiliser if you’ve got one or consider installing additional security.

Take valuables like your wallet, sunglasses, phone and iPod with you. Don’t leave them on display for potential thieves to see or in easy to grab places like the glove box or under the seat.

If you need to leave your shopping in the car keep it in the boot where it can’t be seen or use the parcel shelf to hide everything if you have a hatchback or wagon.

Try to park in open, well-lit areas, or even better, an attended, secure parking building. Don’t forget to also keep an eye out for reversing drivers, runaway trolleys, and children – and if you ding someone’s car, leave your details because it’s the right thing to do.

If you’ve got them, remove the detachable faceplate on your stereo, the GPS and its cradle as well as mobile phone chargers.

Yes Slim it does indeed!...

Some amazing figures. It makes New Zealand look like it is choc full of irate selfish thieves.