Firefighters preparing for Christmas on Matakana 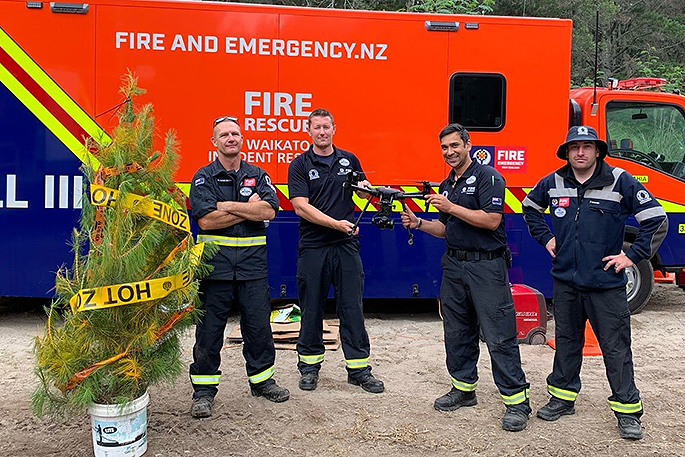 Festive spirits are “well alive” on Matakana Island as fire crew prepare to battle the blaze through Christmas.

Around 50 firefighters are on the Bay of Plenty island today continuing firefighting efforts as the fire continues to spread underground.

“The fire is being fuelled by dry Pampas grass,” says a spokesperson for Fire and Emergency New Zealand.

“There are still lots of hot spots which firefighters are dealing with to stop them burning underground.

“We are expecting to have a similar number of firefighters on site tomorrow as well.

“We will have a continued presence on the Island over the holiday period to monitor and deal with any further hot spots.”

The “tumultuous” fire first broke out on the Panepane Point side of the Bay of Plenty island on December 13, covering around 19 hectares of land and producing large plumes of smoke over Tauranga.

Once the flames were extinguished, firefighters spent the rest of the week dampening down hot spots, but on Saturday it flared up again.

Principal Rural Fire officer Steve Webb says crews, assisted by helicopters and drones, will be working beyond Christmas until they are “satisfied there’s no threat”.

He says the source of the flare up was either due to underground burning or a toetoe bush that flicked embers towards other vegetation.

The island has a lot of pine trees with intricate root systems and a large duff layer, a decomposing organic material layer, that when dried can easily ignite.

That, with the combination of sand has created a matted material under the surface fuelling the fire to now double in size, covering around 27 hectares of land, Webb says.

The cause of the fire is still under investigation, but “don’t normally start by themselves in New Zealand”.

“It’s being investigated thoroughly, but we have found some evidence of people in the area.

“It looks like someone was in the area, someone potentially doing some sort of recreation, like smoking or a campfire.”

Webb says the fire will continue until they either get all the underground hotspots identified or “a heck of a lot of rainfall comes”.

Fire have been working closely with local Iwi on the Island. Matakana Island locals haven’t been evacuated and aren’t under “any eminent threat”.