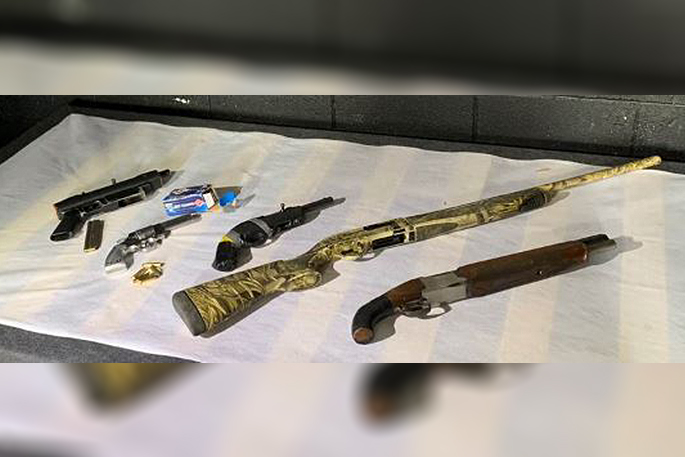 Ammunition, methamphetamine, cannabis and cash, the value of $26000 dollars have been seized in police raids across the Eastern District.

Police have arrested seven people in relation to search warrants executed across the Hawke's Bay, Raupunga & Gisborne since December 8.

The warrants are a part of an ongoing investigation targeting the unlawful possession of firearms and drug dealing offences by gangs across the Eastern District following drive-by shootings and violent attacks over recent weeks in the Hawke's Bay.

In total, 21 firearms have been recovered and seized including a high-powered MSSA style assault rifle and numerous sawn-off weapons and a revolver.

A number of the firearms seized were loaded, says Detective Inspector Rob Jones.

A 50-year-old man was arrested and has appeared in the Wairoa District Court on firearms charges.

A 47-year-old man and a 45-year-old woman both from Waipukurau, were arrested and charged with drug dealing offences relating to methamphetamine.

A 35-year-old male was arrested and charged with supplying methamphetamine.

He has been remanded in custody, due to next appear in the Gisborne District Court on the 13th January 2021.

A 58-year-old Hastings man was arrested on drug dealing charges relating to methamphetamine.

"Both will be appearing in the Napier District Court today, December 23.

"This highlights real concern around the apparent ease of access by criminals including gang members to possess firearms and ammunition."

Rob says Eastern Police are committed to targeting organised crime activity in the area and those individuals who are in unlawful possession of firearms.

A number of addresses searched where firearms and ammunition were located are connected to members and associates of Black Power and Mongrel Mob.

“We want to send a clear message that such criminal activity won’t be tolerated.

"It causes immeasurable harm in our communities – harm that we are committed to reducing.

"Police will target anyone who involves themselves in illicit drug manufacture and distribution, the number of high-powered firearms seized indicates a willingness to perpetrate intimidation and violence in order to achieve illegal activity.

"Similarly, police will continue to have dialogue with gang and community leaders in an ongoing effort to prevent future violence.

"The recovery of these firearms is a huge relief to Police and those individuals in unlawful possession of firearms should expect to be targeted by Police.

"Enquiries are continuing to locate people involved in this offending and establish how these firearms have come into the possession of gang members.

"As such, Police are unable to rule out the possibility of further arrests or charges being laid."