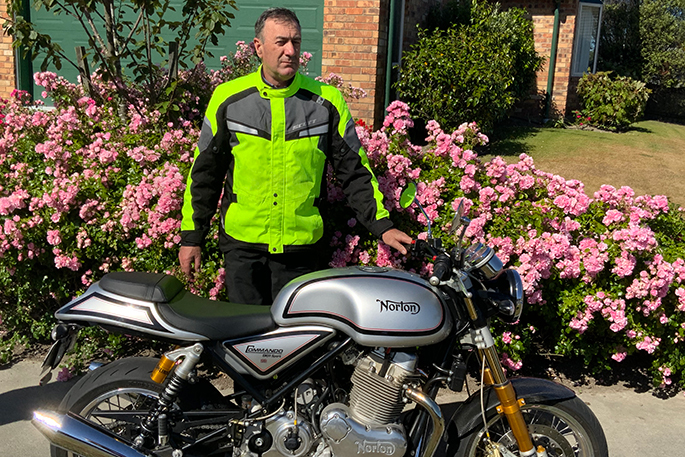 Davitt Lavery has a “shark bite” scar on his right leg to remind him of his crash. Supplied photo.

Over the past four years there have been almost 3000 crashes involving a motorcycle or moped at urban intersections.

At a time when motorbike sales hit record levels, a motorcycle enthusiast wants to share his recovery story to help prevent others suffering the same serious injury he did on his motorbike.

You don’t have to tell Davitt Lavery to take another look when he approaches an intersection – his “shark bite” scar on his right leg reminds him of his crash every single day.

The motorcycle enthusiast knows first-hand what can happen when drivers don’t look again.

In 2011, Davitt lost half the flesh below the knee of his right leg when a motorist failed to establish the road was clear at a Christchurch intersection and drove into him, pinning his leg against his bike.

“My accident is always in the back of my mind,” he says.

“It happened in a split-second, when a driver could have looked again and easily prevented it, and it changed my life forever.”

The collision scuppered Davitt’s prospects as a professional golfer, leaving him with what, he says looks like a shark bite out of his leg.

It took a year to build-up the remaining muscle on his leg so he could walk normally again.

“Being a motorcyclist, you can’t take anything for granted. When I ride, I go out there to survive.”

In the family car, “I always take another look. Always”.

It is sage advice and even more relevant today, as this year New Zealanders have been buying motorcycles and mopeds at the fastest pace in a decade.

It’s part of a global trend since the COVID-19 pandemic put a halt to travel and prompted people to spend their money on other things.

Sales are estimated to reach 9000 bikes in 2020 and the buying spree means our roads are busier than ever, so it’s timely to remind all road users to take more care at crash hotspots such as looking again to make sure the way is clear at intersections.

In the Bay of Plenty, there have been 1583 motorcycle related accidents in the past five years with the number of claims in 2019 (330) the second-highest year in this period.

These motorcycle injuries in the Bay of Plenty over the past five years cost $29.4m to help people recover, with the cost of these claims $6.6m in 2019.

There have been 2,758 crashes involving a motorcycle or moped at urban intersections in the past four years, Waka Kotahi (NZ Transport Agency) data shows.

Of those, 538 involved serious injury and there were 38 fatalities. Drivers are at fault in 90 per cent of crashes between cars and motorbikes at urban intersections, Ministry of Transport figures show.

“We’ve got to be more aware of the dangers at intersections – all of us,” says Dave Keilty, ACC Injury Prevention Leader.

“Look again for motorcyclists, not just the gap. Be aware of your blind spots.”

Blind spots aren’t just about the limits of a vehicle’s rear vision mirrors. Our brains are very good at picking out movement in our peripheral vision, but we do this by spotting familiar objects using pattern recognition, says Kevin Williams, who runs the Survival Skills advanced rider training in the UK.

The trouble is, these snapshots may not pick up the pattern of unexpected objects like a motorcyclist. It’s a phenomenon known as saccadic masking and it’s part of the science behind the advice to look again at intersections.

Nine years after his accident, Lavery is part of 2020’s motorcycle sales boom. He took delivery of his 30th motorbike this year, one of the last Norton Commando 961 Sports to roll off the production line before the British company went into administration (India’s TVS has since acquired Norton).

The Norton joins an eclectic collection of bikes, many of them restoration projects including a 1978 Yamaha 1100 which has won plaudits at shows, and a 1968 Yamaha 250.

He’s planning to join friends and ride the Norton down to the Burt Munro Challenge in Southland in 2021.

He’s kept his pro tour members card, having qualified to play in the NZ Golf PGA Seniors Tour just weeks before his crash in March 2012, but he’s more likely to be giving a golf lesson than playing a round these days.

“I was never the same guy after the accident,” he says.

Staying safe on the road has taken on an extra and personal dimension for Lavery. His 17-year-old son has bought a Kawasaki 600.

Daviitt sent his son through a road skills course at Ornsby Motorcycle Training, one of the providers for ACCs Ride Forever programme. More than 23,000 motorcyclists have completed Ride Forever courses.

Data shows that riders who complete a course are 27 per cent less likely to make a crash-related injury claim.

“I’ve told him it’s all about surviving when you’re on a motorcycle,” he says.

“And for anyone behind the wheel of a car always take another look at intersections. Always. The lives of our riders depend on it.”

Thanks Bruja. I really don’t see much of a difference between scooters and someone riding a bicycle or electric assisted bike. We still need to be aware of them as car drivers. It makes sense that they should change laws for them regarding helmets. But what is happening here is old laws being applied in new times. New laws required. They will come eventually.

Tom, I am well aware of what the ’law’ might say BUT the Police and Council staff can surely step in and say that they are not ’okay’ as they endanger both themselves and those trying to ’avoid’ them. If they are ’mobility scooters’ then they are surely only permitted to be on either footpaths or pedestrian crossings NOT on roads.

My Motorbike Rule#1 Assume everyone and everything is trying to kill you and behave as such. You almost develop a sixth sense after a while. I bet ya this person is going to.... Yup! There they go! sigh* #2 Always...at any given second...have an escape route even if that means going off the road to achieve a safe stop. Keep front wheel directed so you can move if required to. #3 If worse comes to worse...avoid being put in a crush situation between your bike and other objects/vehicles. etc Avoid being put in the situation where you come to a very quick stop. Crashing and sliding out is fine. It’s the sudden stop that will get you. As for Lime scooters. It’s the law that determines whether people need to wear them or not and current law says they are classed as mobility scooters as illogical as that sounds.

and can ANYONE tell me why people are allowed to ride lime scooters and powered skateboards on our roads? No helmets, nothing. A person on a push-bike has to wear a helmet. WHY are these ’machines’ allowed on our roads. No licence needed. No helmet required!! I see cars now trying to ’watch out’ for these things now on top of all the rest! Sheer lunacy by someone .....yet again.....at our ridiculous Council, who has permitted this!!! :(