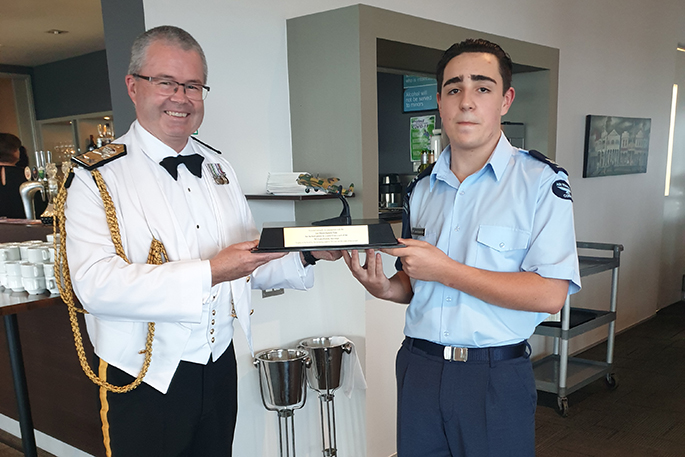 The win means his unit, 16 Squadron, was engraved on the associated Les Munro Lancaster Trophy for the third time.

The trophy presentation was made by Club Patron, Rear Admiral David Proctor, Chief of Navy at the recent Ladies Dinner of Bay of Plenty Officers' Club held at the Tauranga Club.

The topic for this year’s competition was: "In the wake of the COVID-19 pandemic, what steps should New Zealand take to protect its national interests?"

"On the night of the competition, back in September, the speech champions of each of the three Tauranga-based Cadet Force Units were invited to deliver their arguments in a timed speech of 10 minutes," says a spokesperson for the club.

"The three speeches were delivered to a judging panel along with a group of 50 supporters, cadets and guests including reps from the prize money sponsors of the Hauraki Association, Tauranga and Mt Maunganui RSA Clubs.

As has become customary, the competition winner was invited to deliver the winning speech at a formal function for members and guests of the Bay of Plenty Officers' Club.

To do this, Corporal Somerville had put aside his NCEA studies to deliver his winning speech at the Ladies Dinner and got to stay for the dinner as a guest of the Club.

"In the pre-dinner speech, he started his speech with the same prop he had used for the competition when he had placed a walnut which on each of the dinner tables.

"He then explained the symbolic walnut in the context of COVID comparing the people of New Zealand as the kernel with the walnut shell as the required protection from the pandemic.

"In his speech, he argued the steps to protect the national interest of New Zealand required the assignment of the NZ Defence Force to provide the necessary disciplined leadership framework to work with other key agencies."

He also argued the framework should encompass the island nations of the Pacific as these are part of New Zealand and their interests are also the interests of the nation.

His speech drew a hearty round of applause by all those present.

It was later announced Corporal Somerville had been awarded a supplementary prize donated by Mr Andrew Gormlie, CEO Classic Flyers Aviation Museum of a flight in Harvard 66.

Following dinner, the formalities were led by Club President, Squadron Leader Tony Young, when he formally welcomed: the Rear Admiral David Proctor RNZN and his wife Wendy along with special guests; Wing Commander Andy Bryant RAF the UK Defence Adviser to NZ, who had been the Guest Judge at the Speech Competition; and the past and present President of the Manawatu Officers’ Club and their wives.

Admiral Proctor was invited to address the dinner guests when he congratulated Corporal Somerville on an excellent speech and commented he liked the symbolism of the walnut and thought he might use it himself.

He went on to explain the NZ Defence Force had currently committed some 1200 personnel to support Operation PROTECT, as the COVID response by the NZDF. He indicated this on-going commitment involved had already led to the deferral of planned deployments of RNZN ships.

In his closing remarks, he made special mention that the thanks of the nation were due the wives and partners of past and present NZDF service personnel for supporting families especially when their servicemen and women were deployed away from home.