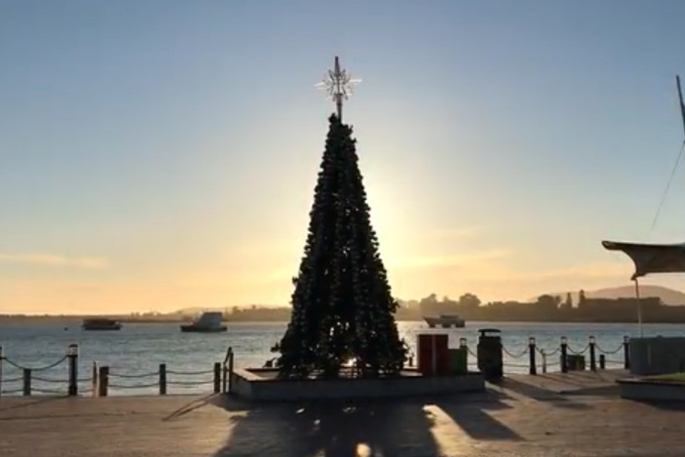 The southern end of NZ will have a cooler, showery Christmas Day, while those in the north eastern North Island will have more sun and heat.

The forecast is that of a fairly typical December day on a couple mountainous islands in the Roaring Forties belt of windy weather, with a cold front moving up New Zealand's South Island dropping temperatures and bringing showers, says WeatherWatch.co.nz

"Temperatures look to be below normal in parts of Southland and Otago and maybe even Canterbury too.

"Further north it will be drier but some cloud in the west brought in by that windier sou'west flow could make Friday a little gloomy at times - and cooler if you're near the Tasman Sea.

"This same flow should mean the eastern and north eastern North Island will be sunniest, driest and likely warmest."

The remnants of Yasa, while fairly close to NZ this week, will have no impact on our Christmas Day weather. 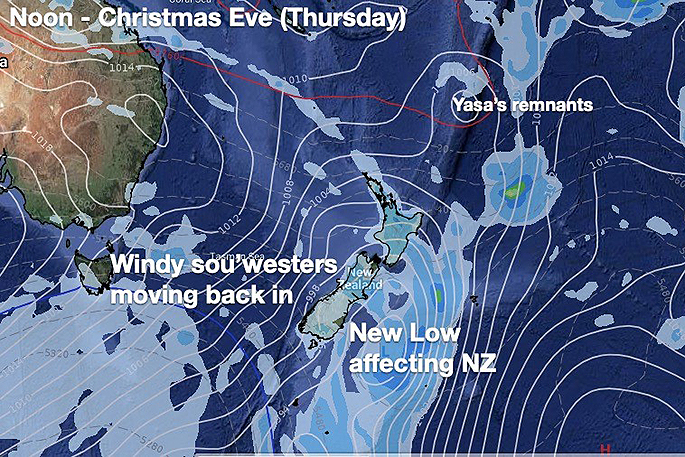 COLD:
Southland and Otago may be thinking of the song "I'm dreaming of a White Christmas" or "Let it snow, let it snow, let it snow" with daytime highs in parts of Dunedin, Invercargill and Queenstown struggling to even make the teens. Highs of 12 to 14 degrees are forecast in a number of place and, incredibly, a dusting of snow on the ranges is also possible (very high up). Canterbury and the West Coast won't be overly warm either, with highs in the low to mid teens for many.

WIND:
Taranaki, Auckland and Bay of Plenty look to be the windiest on Christmas Day with a 30km/h sou'wester blowing through at times. It's not a major wind, but just enough to maybe be a bit annoying for some (like tents, or outdoor lunch/dinner plans). Wellington, despite your run of windy and cloudy weather lately, we're not placing you in the windy category for Christmas Day!

SUN and HEAT:
The eastern North Island, especially Gisborne and Hawke's Bay. While not quite as warm as Christmas Eve was, most places will still make the low to mid-20s with mainly sunny weather. Inland parts of Gisborne will make the mid to maybe late 20s, like Te Karaka. Inland Bay of Plenty, like Kawerau, may also make the mid to upper 20s. Nelson and Marlborough on the edge of warmer and drier weather - with that cooler, cloudier change moving up the South Island. Highs there only be around 20, or the low 20s, but still milder than most other South Island places. 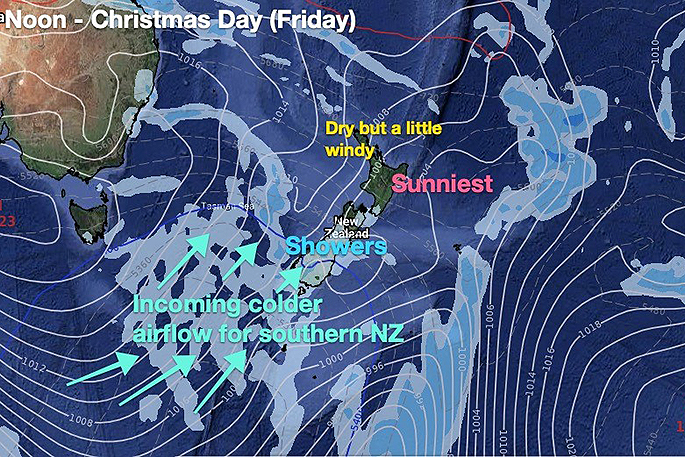 COOLEST:
Southland, Otago, the West Coast, Canterbury, the entire western coastal North Island. Temperatures will be down into the teens for most of these areas. In the North Island some might get into the 20s if a little more sheltered.

CLOUDIEST:
A large part of the South Island and the western North Island may also be fairly cloudy. This includes Auckland too.

WETTEST:
Parts of the South Island look wettest with some light showers, also some later heavier showers inland. It's a little hit and miss so refer to your local hourly forecast at WeatherWatch to see if you're in the risk zone. The North Island looks mainly to entirely dry.

DRILL DOWN LOCALLY
WeatherWatch.co.nz and RuralWeather.co.nz have more forecast locations than all the Government forecasters combined. If you're at home this Christmas - or travelling across NZ - don't forget to check our HOURLY data. A recent Government review found that WeatherWatch.co.nz had New Zealand's most accurate rainfall data. Those hourly and daily totals will be a very helpful guide not just on Christmas Day - but for the summer months ahead.

MERRY CHRISTMAS AND HAPPY HOLIDAYS!
To everyone across Aotearoa - and our readers around the world - have a very Merry Christmas and happy holidays, from our small team to you!