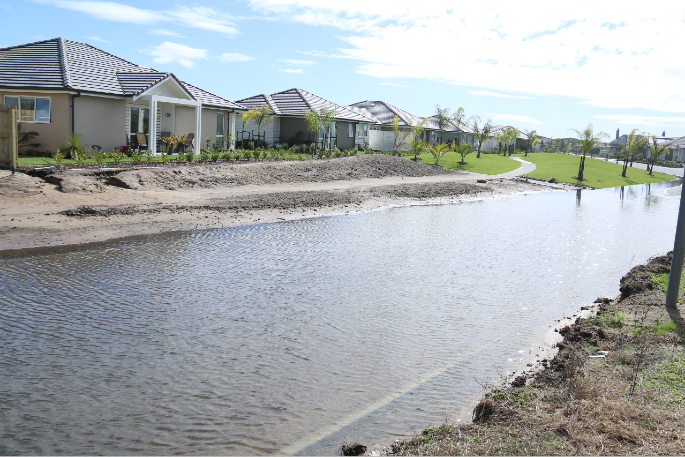 Tauranga City Council is updating flood plans to help prevent flooding like this on Grenada Street in 2017. Photo: file.

The pamphlets have been distributed to properties in areas that may have a potential future flood risk and in some cases properties that aren’t affected by the plan changes.

Proposed Plan Change 27 which refers to flooding from intense rainfall events, introduces new rules to manage the effects of flooding on people, properties and infrastructure.

In November, council sent letters to property owners about the proposed plan change which caused confusion for some residents.

City and infrastructure planning manager Andrew Mead says the letters were a starting point for a discussion with property owners.

He says getting the letters out earlier, because some arrived after the public meetings about the changes had started and using more common language are things they could have done differently.

The pamphlets started circulating not long after the letters.

Council city planning team leader Janine Speedy says the pamphlets are “scaremongering” and they have caused unnecessary worry for people.

Some claims made in the pamphlet are that the new rules will significantly reduce the value of people’s home, prevent people from doing building work on their property, give council rights to use people’s property without asking and increase people’s insurance costs.

“The pamphlet makes a number of claims that are simply untrue and it’s important that people understand that,” says Janine.

A person involved with sharing the pamphlets says they are disappointed that council is making accusations of scaremongering because residents are just sharing their thoughts and concerns with neighbours and the pamphlets are a summary of those concerns.

They say council should have done a better job of communicating the changes and created a before and after table to show the impact the plan change will have.

The person would like to see the submission process extended past February 1 to give people enough time to get information.

Andrew says council has no problem with community discussions happening but they need to do so in an informed and educated manner and the pamphlets aren’t assisting that.

Some of the key points council want people to know who have received the pamphlet are:

Council invite anyone who is worried to contact them and arrange a one-on-one meeting or phone conversation to work through the issues, says Janine.

To date council has spoken with more than 1000 residents at public information open days and had more than 220 one-on-one appointments to discuss the detail of the proposed plan change as it relates to particular properties.

“In most cases, I think people appreciated having a better understanding of what the proposal is seeking to achieve and what it means for them.”

Janine says the continuous updating of flooding information, including the rules proposed by plan change 27, is part of council’s wider programme of understanding and living with natural hazards.

It is a function the council is required to undertake and is work that should be done to ensure that the city is resilient to natural hazards, she says.

People are able request a review of the flood mapping if they disagree with it as well as make a submission about the plan change. Submissions have been extended to February 1 from December 18 and flood reviews can be requested at any time.

The best way to prevent flooding is to keep the storm water system clear and maintained. Don’t blame nature.