One and one for Emirates Team NZ on Day One 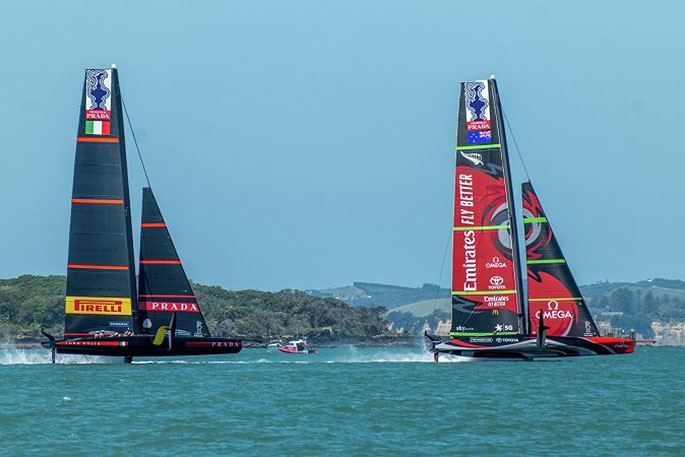 It has been a long wait for Emirates Team New Zealand since their last official America’s Cup race, especially on their home waters of the Waitemata Harbour.

After years of build up to now have the opportunity to race in front of home fans is a significant milestone for the entire team and a huge step towards the ultimate objective of winning the America’s Cup in March.

Auckland’s weather conditions could not have been more perfect for the first day of AC75 action, allowing Race Director Iain Murray to set the racecourse up on the inner harbour stadium racecourse C.

A 2.02 nautical mile course on with a 12-16 knot breeze from the SW directly under the shadow of North Head and Bastion Point lined with spectators eager for a glimpse of the revolutionary AC75’s locking horns.

Tauranga's Peter Burling on the helm managed to kill the time necessary and forcing Luna Rossa to tack away starting the race on split tacks.

The all-important first cross Emirates Team New Zealand crossed ahead on port tack on a beneficial left-hand shift taking early control of the first upwind rounding the top mark 0:41 ahead of Luna Rossa.

“We got a nice left shift off the start line,” says Burling, “and then a nice right shift which put us out to a healthy margin on the first beat and then it was just about connecting the dots around the racecourse.”

Emirates Team New Zealand continued extending around the course, to the delight of the large crowd gathered down at the America’s Cup Race Village in Auckland’s Viaduct watching on the big screen.

Luna Rossa maintained the margin behind the kiwis in the second of three laps, before an average rounding of the final gate 5 splashing down slowing them up as Emirates Team New Zealand continued on their downwind march to the finish eventually winning 3:13 ahead of the Italians to take the first blood of their AC36 campaign.

“After sailing basically on our own for so long over the past year it was really good to have some good interaction in the start with Luna Rossa. These boats have incredible speed and manoeuvrability, so it was a good first race for us” 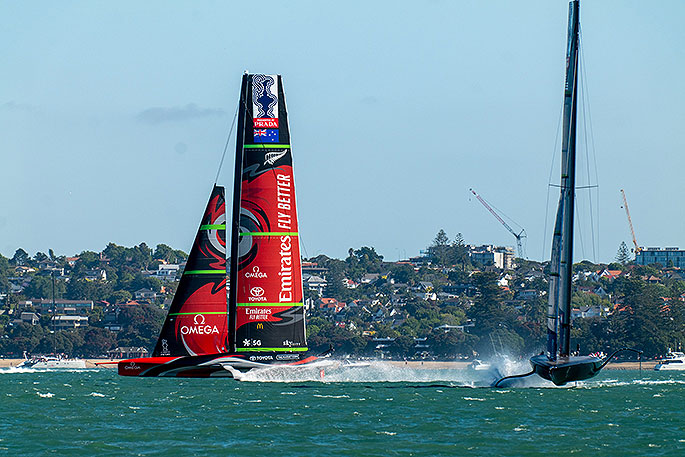 American Magic and Emirates Team New Zealand started the final race of the day having won their respective first races.

The simple equation was one team would end the day unbeaten and one would finish equal with Luna Rossa with a 1-1 win / loss tally.

Billed as the match of the day, and that is was.

American Magic on port, Emirates Team New Zealand on starboard, the Americans flew into the start box with the kiwis, taking a more low speed entry before converging with the Americans remaining on the foils nailing the start and leading off forcing Emirates Team New Zealand to tack away quickly being covered by American Magic.

Burling suggesting “let’s just lock it in here boys” as both boats headed out right on port tack, every kiwis tack mirrored by American Magic helmsman Dean Barker in typical match race style rounding the top mark 0:15 ahead of the kiwis with plenty to do to get close to an overtake.

The real action came on the final upwind leg where Emirates Team New Zealand split at the bottom mark gate to engineer a split and subsequent tacking duel managing to eat into the lead of American Magic as many spectators fingernails were being crewed in anticipation as the boats converged on the top mark.

Emirates Team New Zealand managed to get the inside overlap and force the American boat up, protesting and getting a penalty on the Americans before going straight into a gybe falling off the foils and quickly slipping back behind American Magic.

“That was a good interaction at the top mark there,” says Burling. “But after doing the rounding we wobbled our way through a bad gybe as we wanted to keep clear of the American’s, but they got back in front.”

The final run was bow to bow at times, but American Magic managed to edge out in front and cross the finish line 0:12 ahead in a race that had no shortage of action and a sure sign that an action packed summer of racing in Auckland is ahead.

“We didn’t make life easy for ourselves in the second race today,” says Burling.

“We had an issue before the start, which really just kept compounding as we tried a few too many tricky manoeuvres. It felt like we were going nicely in straight lines and eventually our tacks, but I think we just really had to keep it a bit simpler than we did.

"But to make that many mistakes and still be in the race was I guess is one positive to take away.”

The day certainly ended with thousands of spectator’s satisfied at the prospect of an exciting three days ahead. “It was pretty amazing today to be out racing.

“It has been a long time since we have raced with another boat with something up for grabs.

"But it has been great to see all the kiwis come out in support of the event, and to see our long-term vision of bringing these amazing boats into the inner harbour stadium race course become a reality.”