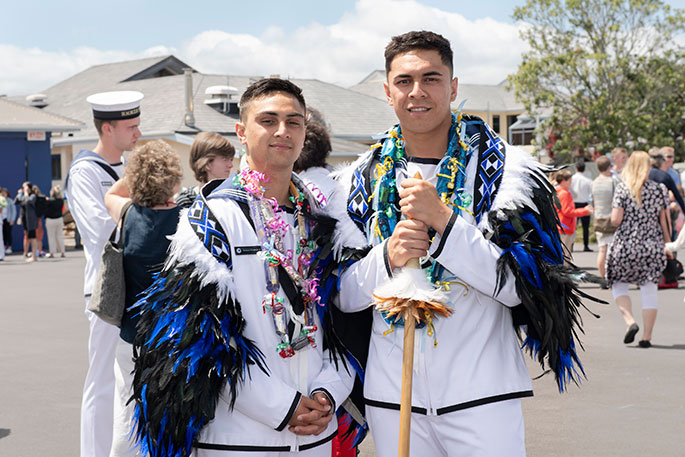 In the wake of a tourism downturn in Rotorua, two brothers have moved from a performing arts family business to embrace careers in the Royal New Zealand Navy.

Khan, 21, and Bodean Raharuhi, 19, of Te Arawa, graduated together from the 16-week Basic Common Training course at Devonport Naval Base in December, among a class of 88 trainees.

It was a proud moment for Khan, who led the Navy haka for his graduating class with skills honed at the Mitai Marae Village, his family’s business.

The pair are the oldest of five brothers and are very aware they are setting an example for their siblings and wider family.

Khan had also been working as a tour guide at Rainbow Springs after finishing at Western Heights High School, but he had wanted to join the Navy since he was a teenager.

The pair love the sea and are strong surfers.

“I had been doing Navy applications for a while, but I didn’t get properly into it until I was 20,” Khan says.

“What pushed me was having a son. I thought, I needed to do something, to create a legacy for my family.” 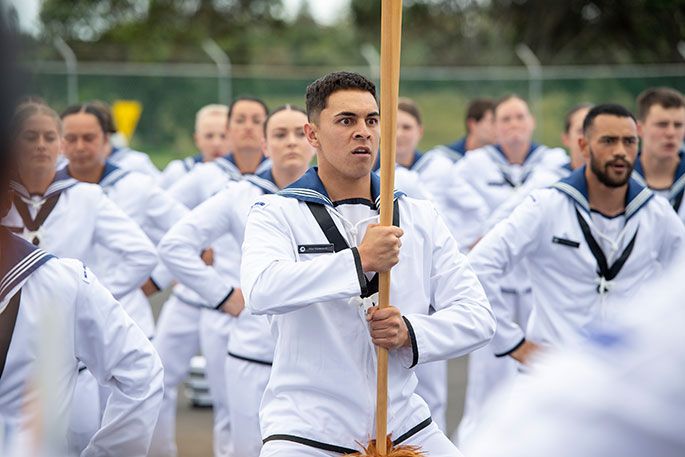 OSCS Khan Raharuhi wields a family taiaha as he leads the haka during the Basic Common Training graduation ceremony at Devonport Naval Base.

Bodean followed his lead and the pair did a police preparation course at Toi Ohomai Institute of Technology to ready them for the rigors of Navy training.

They started in August, just as Auckland went into Level 3 lockdown. It meant the trainee entry into Auckland had to be carefully managed, with buses delivering recruits to the base.

The brothers were fit, but there was homesickness.

“You make a lot of friends in training. They know what you’re feeling, because it’s the way we’re all feeling,” Khan says.

“Mail from my parents helped me through, and having my brother there was great. But there are so many highlights, so many new things we’ve learnt.”

Bodean says he kept himself on track by thinking of his family and the future.

“My brothers; they’re looking at us as big role models. We didn’t want to let them down.”

He enjoyed some of the toughest parts of the course, such as the ‘Shakedown’ Week, which tests trainees’ endurance.

“You think you’re slowly improving, but during those weeks you see this massive difference, compared to how you were at the start. It makes you feel good.”

Bodean and Khan say they are excited to start their trade training next year in the Seamanship Combat Specialist role.

These are the experts in seamanship operations, including gunnery, seaboat operations, boarding of vessels and ship security.

Khan’s advice to others is to give it a go.

“It’s an amazing experience. You’re doing things very few people get to do. I’m hoping some of my family follow in my footsteps.”

Bodean says it might be tough at first, but it gets better.

“Just go hard. You feel good about yourself. You feel proud.”