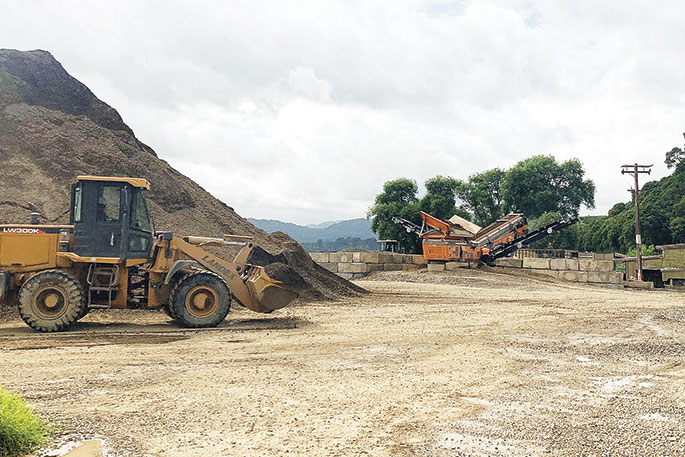 Delta Contracting's gravel screening operation on Amokura Road has been praised by neighbours who say dust has been dramatically reduced. CHARLOTTE JONES / LDR.

They may be few in number but residents of Amokura Road in Opotiki assure their council, they do exist.

The residents have been left feeling invisible after Opotiki District Council turned down a contractor’s offer to seal their road because councillors thought no-one lived on it.

The decision to decline Delta Contracting’s offer to partly-fund the work has left a sour taste in the mouths of both the contractor and residents.

Councillors refused the offer, against staff advice, as they believed no one lived on the road and the contractor was only offering to partly-fund the sealing to manage dust and gain its resource consent.

However, there are three homes on the road and Delta Contracting director Paul Blennerhassett says the offer is only intended to be a goodwill gesture.

He says sealing the road offered no advantage to his gravel screening operation.

"I’ve worked closely with council since 2011 and it was hurtful to see some of the comments that were made.

“I get on well with the staff but some of the comments made by elected members really didn’t need to be said. If the road is sealed or unsealed, there’s no impact on us. This was really meant to be a goodwill gesture for the residents of the road.”

Delta Contracting had originally approached the council to see if it would be willing to share, 60/40, the cost of sealing 700 metres of Amokura Road – estimated to cost up to $100,000.

The council has a loan-funded budget for situations such as this, but there has been limited uptake in recent years. It did enter into part-funded sealing projects with two other contractors earlier this year.

Blennerhassett says his company only pulled gravel from the river every three months and carted material to be used in the harbour construction up the road around six times a day.

During this time, the company wets the road to manage the dust, something Blennerhassett says is far cheaper than sealing the road and far easier as tar seal dried quickly and could therefore kick up more dust from truck wheels.

“At the end of the day it will only benefit residents and we wanted to do it for them as a goodwill gesture.

“It’s no skin off our nose they said no, but to turn around and make it look like we were trying to rip ratepayers off is not on.”

Blennerhassett says he has a focus on hiring local people who are unemployed.

Since COVID-19, his staff had grown from 18 to close to 30, and this will not change despite this upsetting episode.

Residents of Amokura Road have also come out swinging against the council’s decision and in support of Blennerhassett.

Moira Anstis says on “behalf of the three houses that don’t exist” that, although residents hadn’t been pushing for the road to be sealed, if it had they would have been quite pleased.

She says residents did not have a bad word to say about the contractor and he's always careful to keep the dust down.

“When they are carting metal from the river they pass through our farm.

“So, they are always wetting the road continuously. So, if anything, it made things better for us because now there is no dust and usually at this time of the year our road is very dusty.

"The contractor has gone above and beyond to make sure there is no dust for us. He’s been treated very unfairly by council.”

Anstis says she's never been approached by anyone from the council to see if residents would like the road sealed or if they found dust a problem.

“The councillor that said we don’t exist actually cycles down our road.

“So, you would think he would have seen our letterboxes.”

Mayor Lyn Riesterer says she could only stand by the decision that was made by the council.

She notes there are two council departments involved in the matter and there was nothing in the report given to councillors to say the sealing was a goodwill gesture or that there were homes on the road.

“I was intrigued to see councillors went against recommendations of council staff … but that is the democratic process.

“We made a decision based on the information we were given.”

Riesterer also felt councillors’ comments had been taken out of context.

Councillor Barry Howe says it's regrettable residents and the contractor are upset but it's nothing personal and he wouldn’t have approved the road sealing in any case.

Howe says if there had been more houses on the road, he would have approved the sealing but there are people up the coast “screaming out” for their roads to be sealed.

“Some of the roads have 18 or 20 houses on them and it’s about prioritising.

“It’s nothing against the contractor, he’s a good guy but we have to be fair. Not a personal issue but just showing the community we’re fair minded and there are places that are more in need.”

(like Tauranga) another bunch of Councillors that are totally out of touch with their ratepayers !!! A private company offers to assist with sealing a road and the Councillors say NO, because they don’t think there are RESIDENTS on the road !!!!!!! What is their knowledge of their local area - NIL, ZIP, ZERO and the claim to represent the ratepayers !!! Did I miss something ? NAH, just there for the money !!

We think TCC is ineffective and lame. ODC take a lot of beating.