From the AIMS Games to the Jazz Festival, Tauranga is home to some incredible national events that see thousands flock to our region to enjoy some art, culture, and sport.

But in one year, Tauranga's event calendar will be taken to the next level with an event that will showcase our city to a global audience, and bring with it even greater economic and community benefits.

The World Squash Federation Men's World Team Championship will be held one year from now in December 2021.

The event is being hosted in Tauranga on the back of the hugely successful WSF World Junior Squash Championships which were held here in 2017 – one of the first world events to be held in our region.

While it is hard to predict exactly what life will look like in one year, organisers are confident the WSF Men's World Team Championship will go ahead thanks to strong collaboration and preparedness.

Marcus Niles, Squash Bay of Plenty General Manager, says despite the challenges of Covid-19, the event has come out of it stronger.

"The squash world has been starved of quality events in 2020, so there is an appetite for top-level squash in New Zealand and around the world.

"With the cancellation of several World events in 2020, participating countries are very excited about the prospect of coming to a safe country, and getting their representative programs back on track, so we are expecting strong interest from many top countries. The host clubs have bounced back extremely well since lockdown with increased membership and activity, as well as some facility improvements."

Pinnacle games will be held in the glass squash court at the Queen Elizabeth Youth Centre, with the setting proving hugely popular in 2017, providing exceptional game viewing and player experience. 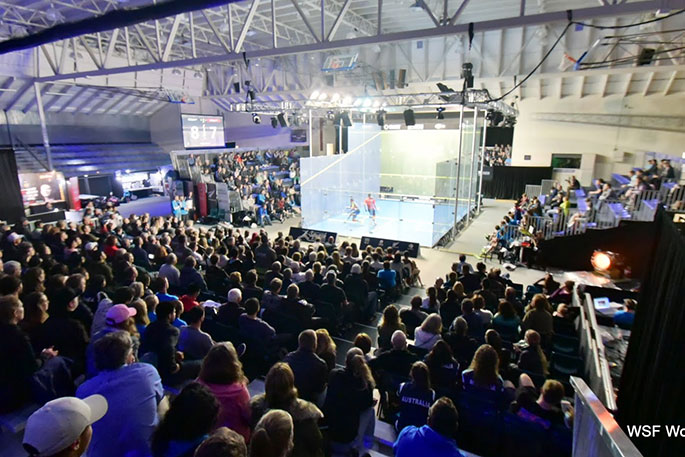 Marcus says having these local clubs working together with Squash Bay of Plenty to deliver a world event is a demonstration of the potential that can be achieved for our city.

"There is a real feeling of ownership across the local clubs for this event, and it has brought the squash community together for a common goal. The clubs are excited to showcase our sport, city and people to the world and are focussed on working together to create an amazing legacy for the clubs and community.

"It is fantastic we are hosting a World event right here in our hometown. The fact we are able to achieve something of this scale – one of squash's most prestigious events – it's a signal of what is to come for our growing city. More events, with more people attending and watching from countries near and far. But it cannot be achieved without that collaboration."

The event has not been hosted in New Zealand since 1983. Now coming to Tauranga, it will be the most prominent World Sporting Championship ever to be held in the region – attracting the top male players from around the world to compete at the highest level, and bringing thousands of attendees along with it.

Alongside the economic impact, which is expected to increase regional GDP by over $1m, the event will also provide a great platform to encourage ongoing participation in squash and sport in general.

TECT funding of $100,000 was approved earlier this year to help make the event a reality. Marcus says this support ensured organisers could confirm viability of the event early, and use this to leverage other sponsorship and funding opportunities.

"TECT's funding is a crucial component for the event, and provides a cornerstone which builds confidence in other potential investors. TECT is a very valuable partner which allows us to produce the best event we possibly can, while maximising the positive impact on the sport and community."

TECT Chairperson Bill Holland says given the impact of COVID-19, having events such as the WSF Men's World Team Championship will be more important than ever.

"Events like this are a significant contributor to the local economy as well as providing tourism exposure with international live streaming. It will also provide an opportunity for the community to experience the top level of squash from players all over the world.

"We are delighted we could help bring this World event to our region and support such a strong collaborative effort between the local squash clubs and Squash Bay of Plenty. It gives us confidence that not only will the event run this time next year, but that it will be a great success."