Cyclone Yasa on track to hit Fiji as Cat 5 storm 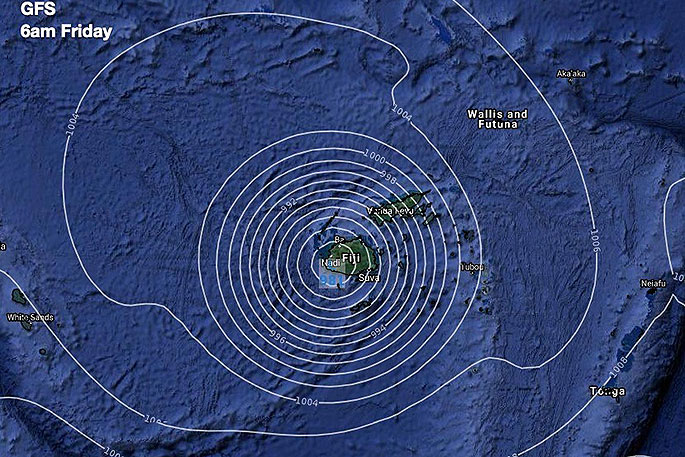 A modelling map showing Yasa's path at 6am on Friday. Image: WeatherWatch.co.nz

All eyes should now be on Fiji as a major tropical cyclone is expected to make landfall there late Thursday and Friday, says WeatherWatch.co.nz

"It's not a good set up for Fiji at all with Severe Cyclone Yasa now Category 4 and expected to reach the maximum level, 5, at some point today.

"Winds would then be sustained at 200km/h and over, along with major coastal inundation near the centre of the storm as it moves in."

WeatherWatch.co.nz says various models show little disagreement about the timing and tracking - although the precise tracking varies from hitting the western side to the north eastern side of the Fiji islands.

"Either way, Fiji is smack bang in the firing line based on all reliable modelling and data today.

"Over the past few days the tracking of Yasa over Fiji has started to shift further east. This exposes more parts of Fiji and more people to the power of this storm."

If it pulls more the west that could reduce the impact in the eastern side.

Yasa is likely to take over 24 hours to move through - which increases the chance of damage, says the weather organisation.

"A storm this powerful can destroy buildings, uproot trees, strip trees of leaves, cause slips, flooding and coastal inundation.

"Yasa is a life threatening event for those in low lying islands in the Fiji group."

WeatherWatch.co.nz says the main risk for Fiji will be from Thursday afternoon until Saturday morning based on modelling today and that as of now all of those in Fiji should be listening to local authorities and evacuating now if need be. 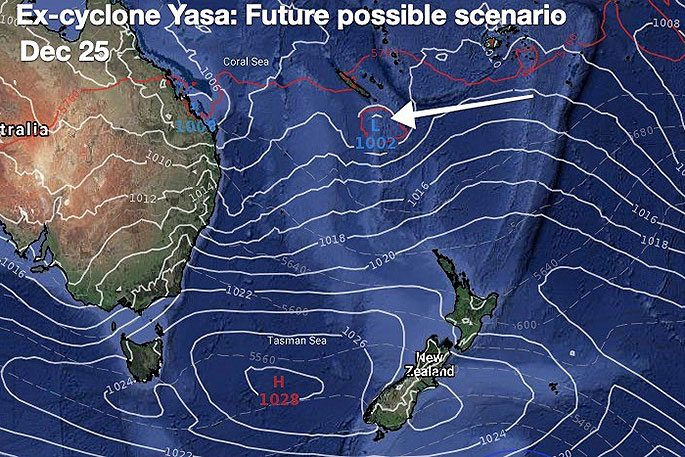 The cyclone that is moving in to Fiji will not be the same beast that potentially arrives in New Zealand, says WeatherWatch.co.nz

"However, we do have moderate confidence the remnants of Cyclone Yasa (Which will technically be an ex-tropical cyclone by the time it reaches our shores) moving into the New Zealand area later next week or weekend.

"Computer modelling, data we trust and experience we've gained over the decades suggests NZ could get some sort of rainmaker - but there is much uncertainty about timing and even if both main islands would be impacted." 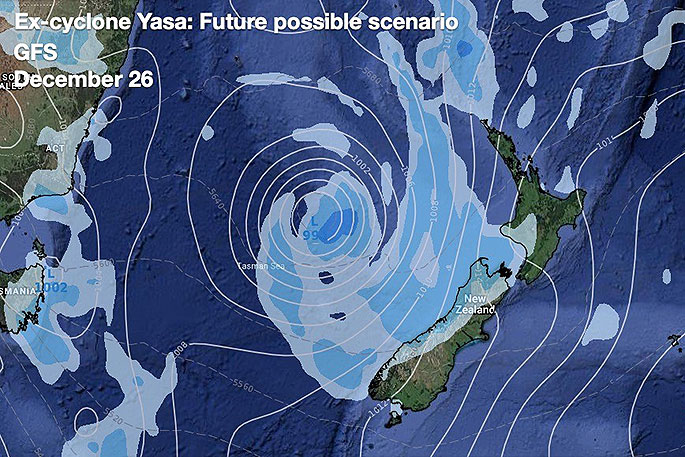 GFS - American modelling - is showing the West Coast may have a wet period of weather as the low moves in around Boxing Day. The North Island isn't as exposed.

ECMWF - European modelling - Suggests the high over NZ will hold firm and may block any low from reaching NZ, at least in the short term.

HOW TO MAKE SENSE OF VARYING MODELS?

"You don't yet! The various modelling is very helpful to see Yasa will likely end up in the north Tasman Sea early next week.

"What happens beyond that is still unclear and so we don't want to put more details in, for fear of locking in that forecast via media headlines.

"Many of you are asking how this storm might affect Christmas Day. For now, we're still not in a position to solidly answer this and we may not be able to until this weekend, due to the uncertainty of Yasa."

WeatherWatch.co.nz says The focus should remain on Fiji until this weekend.

"Any risks for NZ hugely pale in comparison to what Fiji is facing in the days ahead."

Remember, while a moderate risk of [what will then be] ex-cyclone Yasa reaching NZ, there is only a low risk this may be a ‘storm’ still by then in our part of the world

WeatherWatch.co.nz – NZ's risk based on all the best available data today:

40% Chance the remnants of Cyclone Yasa will reach NZ

20% Chance Cyclone Yasa will prompt severe weather warnings in NZ if it reaches us.