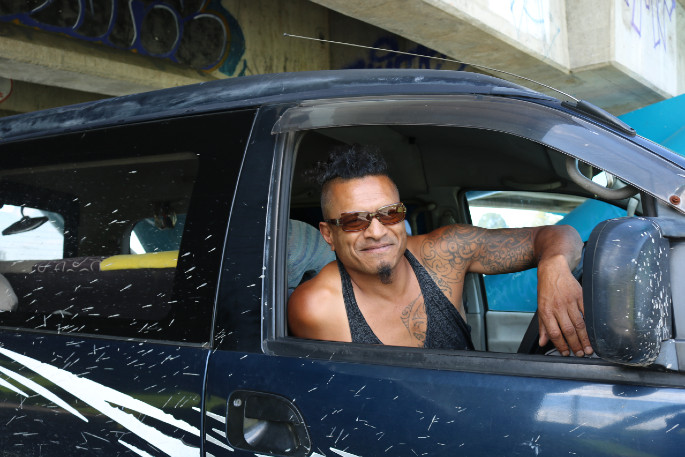 ‘D the Mechanic’ has been living in his car, by choice, for the last six years. Photo: Ursula Keay.

The idea is proposed as a temporary solution for one- two years, while social and public housing is being developed.

There’s been a huge increase in homelessness following Covid-19, according to community development manager Paul Mason.

Dion, aka ‘D the Mechanic’, has been sleeping is his car for the last six years, by choice, in response to the high house prices.

He supports the idea so council can ‘get a grasp on the problem’.

He says homelessness is an epidemic and he knows at least 500 people sleeping in cars in Tauranga.

There are no showers or toilets for homeless in Tauranga, and he washes himself in the river.

He was dubbed D the Mechanic as he fixes cars for free for people who live in their car, only charging for parts.

He knows of people who’ve been stranded after their cars broke down.

The Weekend Sun asked people on the street if they supported the idea of a car sleeping area.

“It’s a good idea, as long as they have access to toilets and showers,” says Ross Olsen.

Michelle Aloria says it’s a good practical thing for the meantime - while a man who wished to remain anonymous says he supports the idea as long as the area is not in the central city.

But chief imagination officer of the Support Services Trust Tommy Wilson says it is a Band-Aid when social surgery is needed.

“We’re just moving them from one cliff to another.

“I can’t see it having an effect on the health and safety of homeless people.”

“It’s 35 years of an abdication of responsibility.”

Councillor Andrew Hollis says if they are able to help, they should.

Tangata whenua representative for the projects, services and operations committee Emily Gudsell says council shouldn’t be seeking external funding for the project as the real issue is lack of availability in emergency housing, which was the responsibility of the Ministry of Social Development.

“We’d be using ratepayer’s money for an issue that’s a government issue.”

She says any funding should go to NGO’s that are better positioned to respond.

“Security is key. Otherwise it will become a gathering place for bad behaviour.”

Councillor Larry Baldock says they are basing the idea on a similar facility in Australia, where alongside toilets and showers they have dentists and doctors who come and visit.

Baldock hopes the project will be linked with ‘wrap-around services’.

A happy and safe Christmas to you. Thank you for all your thought provoking . . . and often provoking :-) comments. Happy holidays mate.

"Dion, aka ‘D the Mechanic’, has been sleeping is his car for the last six years, by choice". Interesting lifestyle choice Dion. Good on you admitting you chose it. I chose not to be homeless...But each to their own. As long as it’s not harming anyone else and doesn’t cost people that choose to work and pay taxes/rates so they can have a roof over their heads. In short. No money should not be thrown at these people. They made their choice.