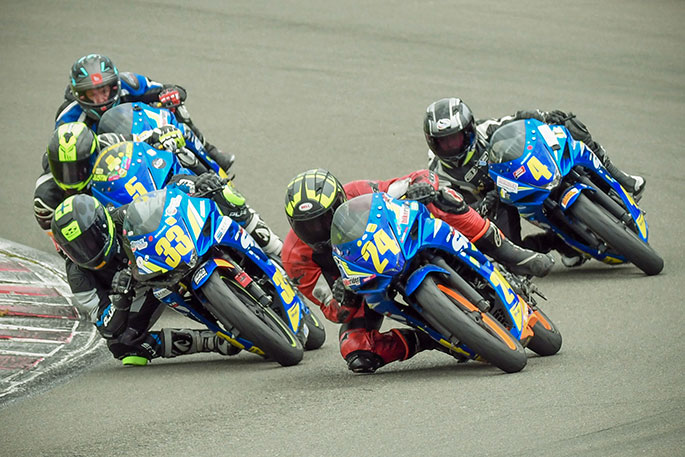 The GIXXER Cup class was again a massive crowd-pleaser at Manfeild on Sunday, the racing this close from start to finish each time. Photo by Andy McGechan, BikesportNZ.com

Round two of the Suzuki International Series graced the hallowed grounds of Manfeild on Sunday and, unbelievably, the racing just keeps getting better and better with each event.

Just as it was at the series opener at Taupo the previous weekend, the racing was fast and frenetic in all the various bike categories, with points leaders changing at the top of several classes at the weekend.

The three-round Suzuki International Series action will wrap up, as it traditionally does, on the public streets of Whanganui, riders tearing around the world-famous Cemetery Circuit, on Boxing Day.

Series organiser Allan 'Flea' Willacy says members of the public could save money by purchasing "early bird tickets" through Ticketek on-line and then they'll also go in the draw to win an upgrade to a Suzuki VIP Pass at the Whanganui finale.

Bike fans simply fizzed at being a part of the first major motorcycle road-race series in New Zealand since the pandemic lock-down, with Sunday's racing at the Manfeild Chris Amon circuit, on the outskirts of Feilding, delivering intensity throughout all of the 12 various bike categories.

First hatched in 2008 and now marking its 13th season, the Suzuki International Series has cemented itself as New Zealand's premier road-race series outside of the nationals and some would say it even rivals that.

Willacy says he's amazed the Suzuki International Series continues to grow and, while last year's entry numbers were a new record, the figures have been surpassed again this year.

"It has been absolutely brilliant. Obviously we have been very lucky with the weather – bright, warm and sunny at the first round and also at Manfeild's round two.

"Racing has been very close across all classes and spectator numbers are great too. I think everyone has been keen to get out after the COVID-19 pandemic lockdown. They've been starved of entertainment and obviously keen to see some live racing like this," says Willacy.

"Every year we say we are getting record entries and this year it has been even better again. Suzuki New Zealand put a lot into this and I think they'd be very pleased too."