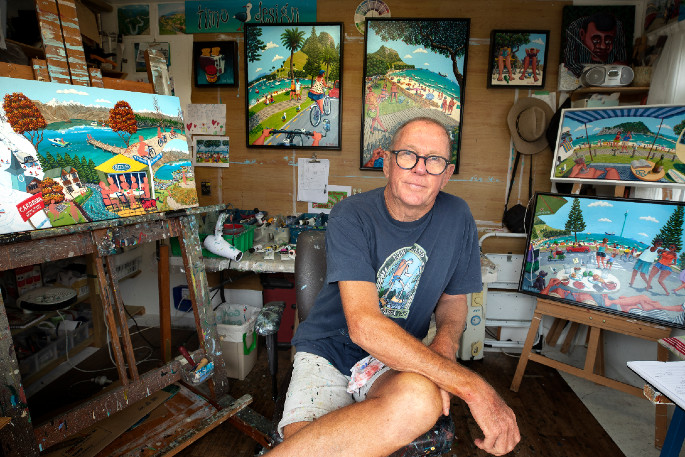 Timo Rannali prepares to put his works on show in a rare exhibition. Photo: John Borren

Watching people’s reactions while viewing his paintings is something Timo Rannali is looking forward to.

“I want to find out what people think, because it's been so long since I've had my work out in public,” says Timo, ahead of his Mount Maunganui solo exhibition launch this weekend.

“The paintings have always gone from my studio straight into people's homes. I just want to be talking to people and see if they smile or cry.”

His paintings with curved ‘fish-eye’ horizons and stylised people are so popular that he’s been kept busy with commissions.

“People come to me and say: ‘I want you to capture our life story onto canvas’. And they want to pass it on to future generations. I have come to the point where I believe that’s a really high calling.”

He spends time capturing a family’s essence, painting their stories, homes and lives into often large works, with stories behind stories, hidden meanings and often the portrayal of personal moments and humour that are especially meaningful to that family.

His work can be described as stylised realism with a naïve bent, with the design of the elements and shapes usually exaggerated and colours always vibrant.

“The main aim behind my work is to celebrate life and man’s interaction with the environment.”

There will be about 15 pieces for sale in the exhibition, ranging from smaller works to large paintings. Some are retrospective but most are recent.

“The retrospective works are ones I did for myself when I needed a break from the commissions.”

There are cyclists, sunbathers, imaginary musicians, even an opera singer with orchestra.

In 2009 Timo published a book on New Zealand titled ‘Aotearoa New Zealand: A Land to Love’ that features his work from all over the country.

“For this exhibition I’ve gone one step further in that I’ve tried to engage the viewer by having them as part of the painting. When you look at the painting, your hands are on the handlebars and you become the cyclist or you are the one sitting at a café.”