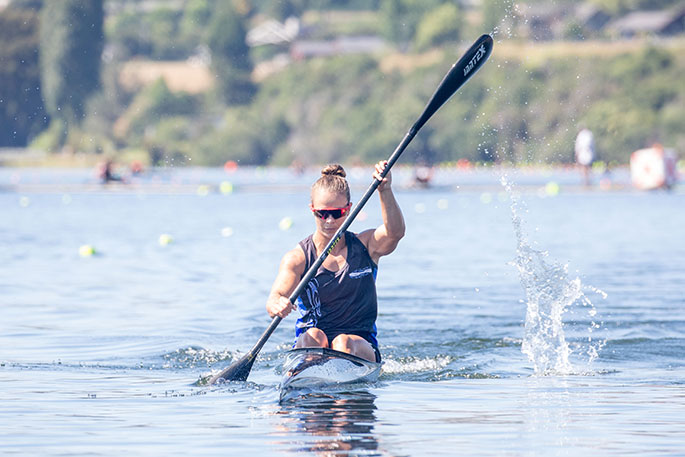 Double Olympic champion Lisa Carrington is the star attraction at the Blue Lake 2 regatta in Rotorua this weekend, as the four-time Halberg Sportswoman of the year makes her eagerly-awaited return to competition.

The 31-year-old paddling ace last competed at the 2020 New Zealand Canoe Sprint Championships in February, where she claimed decisive wins in both the K1 200m and K1 500m finals, before the global pandemic wiped out the prospect of any international competition for the year.

Carrington is the reigning world K1 200m and K1 500m champion and will seek to produce another top-quality display on Lake Tikitapu, although given the outstanding quality of the opposition on show the ten-time world champion will need to be at her best.

Also looking to make an impact in Saturday’s open women’s K1 200m and the K1 500m – which concludes on Sunday - is Caitlin Ryan, a 2017 World K2 500m champion alongside Lisa and former owner of the world best time for the K1 500m distance.

The 28-year-old North Shore paddler is a formidable competitor and will be a threat in both K1 events.

Another strong contender this weekend will be Aimee Fisher (Hawke's Bay), a former World U23 K1 200m and K1 500m champion, who finished runner-up behind Lisa in the K1 200m the national championships earlier this year.

Fisher performed well at the Blue Lake 1 – the first national regatta of the season - claiming an impressive K1 200m and K1 500m double.

The 30-year-old Aucklander took several years out of flatwater paddling to focus on surf ski racing but the London 2012 Olympian is a quality athlete and it will interesting to see how she performs on Lake Tikitapu this weekend.

The leading elite women will also be in team boat action across the course of the two-day competition.

A strong elite men’s squad will also take to the water across two fascinating days of competition in Rotorua in which the main prizes on offer will be the open men’s K1 200m and K1 1000m events.

At Blue Lake 1 in October, Kurtis Imrie (Mana) took the main honours claiming victory in the K1 500m and K1 1000m and he will once again be the man to beat over the classic distance.

His 2019 World Championships K2 1000m partner, Max Brown (Whanganui), was impaired by a sickness bug at Blue Lake 1 but he too will be a major factor.

National men’s K1 1000m champion Zach Ferkins (Poverty Bay) is another likely to be in the mix and watch out for his younger brother, Sam, who performed outstandingly well at Blue Lake 1 to place second in the K1 1000m behind Kurtis.

The third to fifth place finishers in the K1 1000m at Blue Lake 1 – Hamish Legarth (Hawkes Bay), Ashton Reiser (North Shore) and Ben Duffy (Arawa) - were separated by less than half-a-second and will also be a factor.

Also entered is a two-time World Championship representative in the K1 1000m Quaid Thompson (Poverty Bay), who should not be discounted.

Kurtis, Max, Hamish, Ashton, Ben and the Ferkins siblings will all likely contend in what is likely to prove a fast and furious open men’s K1 200m, although the man to beat could be Taris Harker (Karapiro Kayak Racing Club).

The former national men’s squad paddler is a gifted performer over the 200m distance and he claimed an impressive victory by almost half-a-second from Ben Duffy at Blue Lake 1.

Another intriguing race will be the men’s K2 1000m final – a race in which New Zealand have qualified a boat for the Tokyo 2020 Games.

“We had some internal competition and racing in August, which was high pressure but this is the first time the paddlers will have faced competition pressure since the nationals," says CRNZ Technical Director Gordon Walker.

“The K1 events are a good chance to see where the paddlers at are individually and to test a few things out, although from a selection point of view the regatta is not critical.

"However, I’m sure the paddlers will put a lot of pressure on themselves to perform well. Hopefully, we’ll see some good conditions and top-quality racing.

“The crew boat racing will also be interesting. The Blue Lake regatta will form the end of a week-long camp for the squad which began on Monday. We’ve had two days of racing in the week with crews having their first opportunity to race together – most combinations having never raced before.

"We’re looking forward to see how they go again this weekend in a pretty packed schedule. They’re excited to race and have really embraced the learning opportunities competition creates.”

Christchurch-based Para-canoeist Scott Martlew, the two-time World Championship KL2 200m medallist, will also be in crew boat action across the course of the weekend.

Besides the open men’s and women’s action, other divisions who will be performing over the two-day competition are: tyros, U14, U16, U18 and masters.

The action on both Saturday and Sunday gets underway at 7.45am.

Canoe Racing NZ will also offer daily updates via the website and regular updates through our social channels.