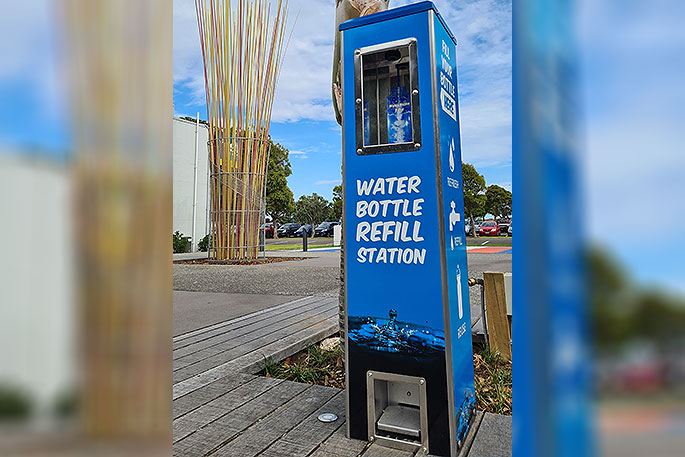 Visitors to the Whakatāne CBD will no longer need to purchase single-use plastic water bottles, now that a permanent water bottle refill station has been installed in Wharaurangi on The Strand.

The station operates via a foot pump, and the contactless design has grown in popularity during 2020 as a result of COVID-19. Whakatāne District Council Waste Minimisation Coordinator, Sheree Kearney, says the initiative solves several issues from environmental and cost perspectives.

“Statistics show an estimated 828 million single-use plastic bottles are thrown away each year in New Zealand,” she says.

“If we each refill a bottle even one time in three, we’d save around 257 million plastic bottles going to landfill every year. Ironically, it also takes more than eight litres of water to produce a single bottle.”

Kearney also says that bottled water costs between 500 to 1000 times more than tap water, but we are often forced to buy bottled drinks because it can be difficult to find public drinking fountains.

“The installation of this station in a highly-visible area, combined with the RefillNZ App that launched this year, means people will be able to take advantage of being able to refill existing bottles for free, rather than buy a new one every time.”

RefillNZ, available from the App Store for iPhone and iPad users, is an award-winning campaign that collates participating cafes, bars, council facilities and tourism businesses that are willing to refill bottles free of charge.

Many also have a sticker in their windows to alert people that they offer the service.

The refill station in Wharaurangi, which cost $4000 including installation, was funded through the Innovating Streets programme and the Waste Levy Fund, which is a national fund that contributes to projects that promote or achieve waste minimisation.

There is potential to install further stations throughout the district if the pilot proves successful.