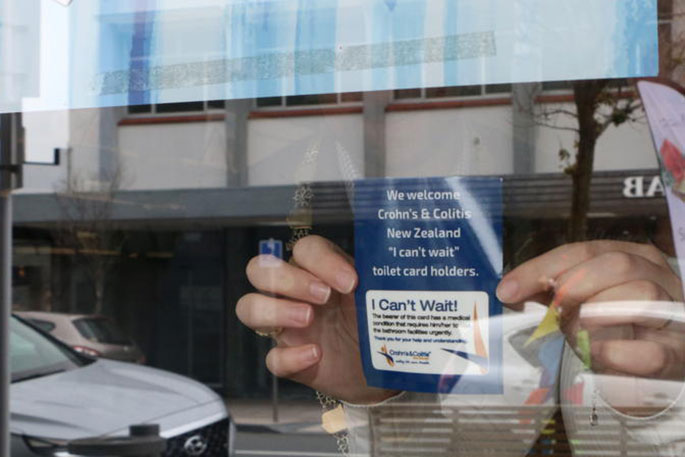 A campaign encouraging businesses to let people with bowel disease use their toilets in an emergency has kicked off.

The 'I can't wait!' campaign, started by a teenager, encourages firms to attach a sticker on their window to indicate it is Crohn's and Colitis friendly.

Routine tasks present a dilemma for those living with bowel disease - to stay home and miss out, or risk an accident in public.

Belinda Brown, who lives with Crohn's, a disease that causes chronic inflammation in the bowel, relayed one such experience at the launch, held at Atrium Cafe in Lower Hutt on Wednesday.

"If you can imagine going out shopping, and no sooner you get to the shops and your stomach starts to grumble. You think ' I need to go and I need to go now'.

"You can see a public toilet that's 200-300 metres away. You get to the curb and step up and an accident happens. I left the shopping mall that day in tears.

"It's absolutely humiliating. Especially at 45. To sit there and think, I can't control my bowels."

There are roughly 20,000 people living with Crohn's and Colitis in New Zealand - one of the highest per capita rates in the world.

Nicole Thornton, 16, is another sufferer and the brainchild behind the campaign.

She wants businesses to openly become Crohn's-friendly by putting a sticker on their window saying they will honour 'I can't wait' cards, held by people suffering the disease.

"To be rejected by people because they are not aware of what we have, our condition ... it's just embarrassing and you're ashamed. But you shouldn't have to feel ashamed, it's more about educating others," Nicole said.

From the age of 12, Nicole has been fighting for better awareness. In 2017, she presented a petition to Parliament calling for businesses to be legally required to allow emergency access to toilets.

This part of the campaign is just the beginning, says Nicole.

The campaign is pushing for Pharmac to bring the drug Stelara into the country. That drug could potentially stop people from having to go through invasive surgery.

"If we could prevent that, that would be amazing."

Crohn's and Colitis NZ chair and gastroenterologist Dr Richard Stein helped Nicole get the original petition off the ground.

A recent survey of those with the disease revealed that 70 percent of people living with Crohn's had had an accident in public.

Fifty per cent says this situation really impacted their lives.

"And how many had been refused access to a toilet when they needed one urgently? 40 percent."

She says inclusiveness and community-mindedness is a huge part of her business model.

"Good food and service, and the open door policy should extend to anyone, no matter what the issue is. So it was just a no-brainer to be a part of it.

"There's no good reason at all" why businesses shouldn't jump on board, she says.

-RNZ/Eva Corlett.
More on SunLive...
2 Comments
You must be logged in to make a comment. Login Now

I agree with The Professor. Very pro-active. Keep up the great work and don’t let anyone from anywhere for any reason steal your dream. YOU GO GIRL. You’re onto something that can go global and help millions of people keep their dignity. I know I don’t know you but from what I read here, I’m very proud of you.

What a great initiative Nicole. I hope businesses all across our region accept this. Good luck.