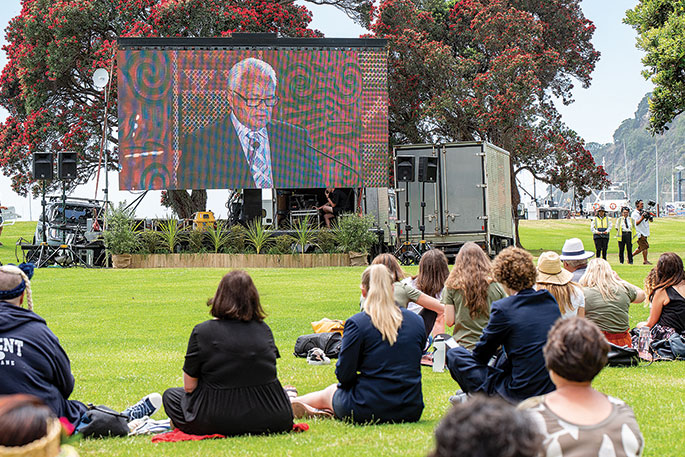 The Whakatane community gathered at Mataatua Reserve to remember those who lost their lives and were seriously injured in the Whakaari eruption last year. TROY BAKER / WHAKATĀNE BEACON

December 9, 2019, was a day of unimaginable suffering, but this year it became a day of peace as the community came together to remember those who were injured and those who lost their lives.

Sitting in the shade of pohutukawa trees the wider community came together at Mataatua reserve to watch kapa haka performances and a livestream of the official event held at Te Manuka Tutahi Marae attended by those most affected by the eruption and visiting dignitaries, including Prime Minster Jacinda Ardern.

There was a strong feeling of community connection at the event and people were thoughtful and reflective throughout.

However, many began to cry as those who had lost loved ones, and those still recovering from the trauma of the day began to speak.

Avey Woods, mother of tour guide Hayden Marshall-Inman, whose body has never been recovered, spoke of her son’s generous spirit, his kindness and how he was, and still is, her rock.

She says she still misses texts from her son and wishes she could hear his ute backing down her driveway again.

Mrs Woods shared a personal memory of being overcome by grief the day after Hayden’s death and how a complete stranger put her arms around her and sat with her while she cried.

“To this day I do not know who that person was, but I hope they are listening now,” she says.

Like Mrs Woods, survivors of the event spoke of the kindness they were shown by the Whakatane community and many thanked first responders and hospital staff for saving their lives.

Those who had lost family gave an insight to those now gone including a love of animals, a talented baker, a caring father, and loving daughter.

The family of deceased tour guide Tipene Maangi could be seen wearing shirts with his photo but didn’t speak at the event.

Those at the event said hearing from family and seeing similarities in their own whanau humanised victims who were previously just one of the 22. 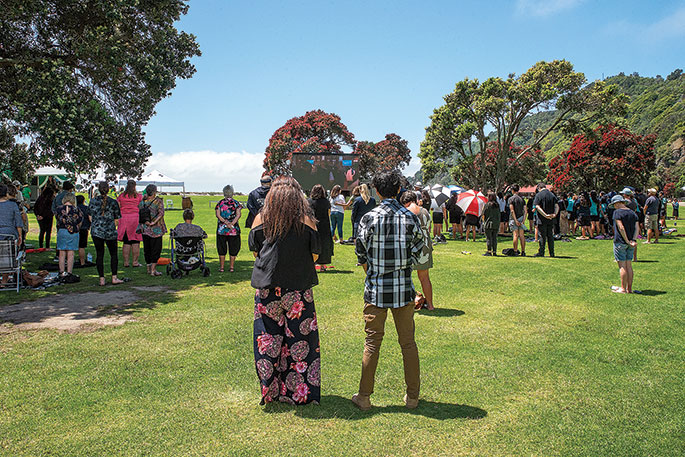 Whakatane deputy mayor Andrew Iles and Whakatane District councillors Nandor Tanczos, Gavin Dennis, Wilson James, and Julie Jukes attended the public event and Mr Iles says to was lovely to come be a part of the community and feel the aroha on the day.

“This tragedy affected so many in our community, so it was really nice for us all to come together and remember in what couldn’t be a more beautiful setting."

Mr Iles spent time in a burns unit himself following an accident in which he lost his hand at the age of 20.

He sympathised with the healing still to come for young local survivors Jake Milbank and Kelsey Waghorn and says the memories never leave you.

Mr Tanczos says the event reminded him of the importance of community and it had been good to hear of how the community came together to support survivors, a fact emphasised by foreign victims in their video testimonials.

She says it was particularly nice to come and show the school’s support for its ex-students Jake Milbank and Kelsey Waghorn.

Ms Waghorn was seen at the public event, but left early, the day seemingly too much to bear.

Trident head boy for 2021 Ben White says he attended to show solidarity with his community.

An elderly woman at the event says she attended because it “means so much to us”.

“I was born and bred in Whakatane and for something like this to happen is just really sad,” she says.

“It affected us all a lot and it is nice to come back here and be in peace. I wanted to come and tautoko the kaupapa that was happening.”