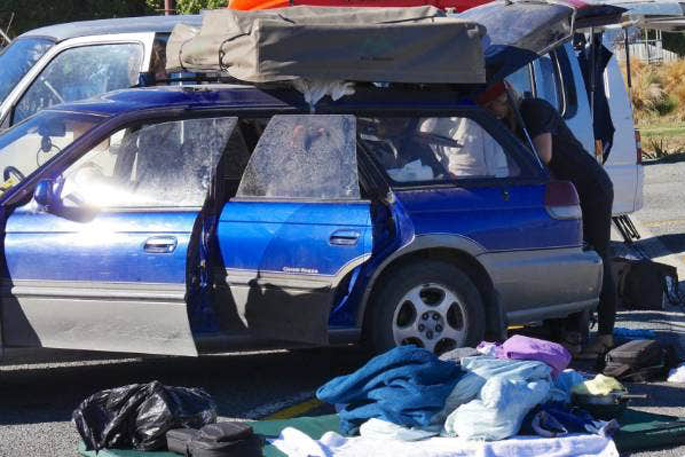 The Tauranga City Council is considering the safety of people who are forced to sleep in their vehicles. Photo: Victoria Andrews.

The idea is proposed as a temporary solution for one- two years, while social and public housing is being developed.

“We’re just moving them from one cliff to another.

“I can’t see it having an effect on the health and safety of homeless people”.

Councillor John Robson says since 1985 central government has stepped away from their role to provide the level of housing required.

“I think what we’re doing is bottom of the cliff. It’s 35 years of an abdication of responsibility.”

Councillor Andrew Hollis says if council are able to help, they should.

There’s been a huge increase in homelessness following COVID-19, according to Community Development Manager Paul Mason.

Tangata whenua representative on the PSOC committee Emily Gudsell says council shouldn’t be seeking external funding for the project as the real issue is lack of availability in emergency housing, which was the responsibility of the Ministry of Social Development.

“We are using ratepayer’s money for an issue that is a Government issue.”

She says council should not be requesting external funding as funding should go to non-government organisations that are better positioned to respond.

“Security is key. Otherwise it will become a gathering place for bad behaviour.”

Councillor Larry Baldock says they are available in Australia, alongside dentists and doctors who come visit, complete with wrap-around services.

I can take you to three residential properties Council has left empty for years, two due to alleged flood risk and one in an older condition, both in Brookfield. Don’t try and suggest you give a damn while these homes sit empty!

Another terrible idea. Mr Hollis. Do not volunteer other peoples money so you feel warm and fuzzy. If you want to help people. Take a pay-cut! Let someone stay with you! Park in your driveway! This is the problem we have at TCC in a nutshell...You’re proposing to spend money we don’t have! It is as if there is a leprechaun living under a rainbow in your office. This would just attract homeless people from miles around!!!

If all the thousands of homeless actually got off their backside and went down to Wellington en masse and camped outside the Beehive I bet they would stop debating whether to wear ties and falsely accusing people of rape, and actually start some actual work. Encourage the homeless to go to Wellington by providing a one way ticket or fuel voucher and directions. Nothing else as it just makes a rod for your own back and condones Wellington’s incompetence and laziness.