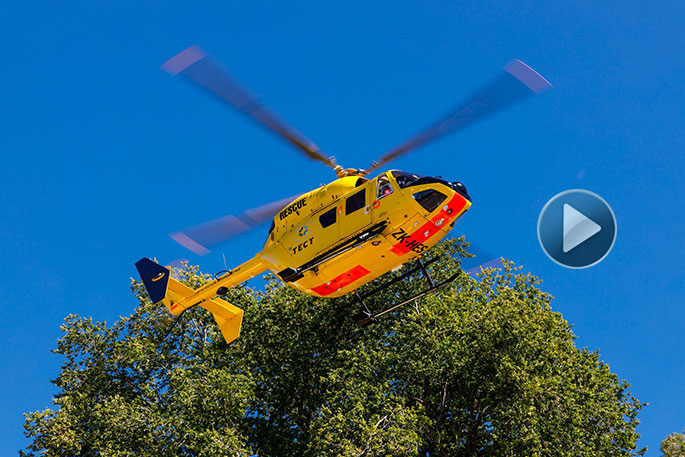 With Christmas just around the corner, most of us are looking forward to a summer relaxing with friends and family, enjoying a few barbeques, and getting out in the great outdoors.

But for the TECT Rescue Helicopter team, the summer break can be the busiest time of their year.

When Glenys Davis and her family set out on a summer walk to Orokawa Bay, they didn’t expect it to end with a broken ankle injury and a winch lift for Glenys into a hovering rescue helicopter at the William Wright Waterfall.

The TECT Rescue Helicopter was the only means of rescue when attempts by ground personnel to stretcher the patient out, proved too dangerous a manoeuvre on foot.

Glenys says despite being nervous, she knew she was in safe hands.

“The crew were all fantastic and made me feel very comfortable on my flight to Tauranga Hospital. The kindness, thoughtfulness and high levels of professionalism was so comforting to me during my very trying ordeal.

“I can’t stop thinking about the wonderful people I met that day and am extremely grateful and appreciative to all in attendance. I’m indebted to them all.”

The TECT Rescue Helicopter has transformed itself into a fully-fledged air emergency medical service with the employment of its own full-time Flight Paramedic workforce and Intensive Care Paramedics (ICP).  The recruitment of ICPs has transformed medical treatment and dramatically reduced prior response times, thereby significantly raising levels of patient care. 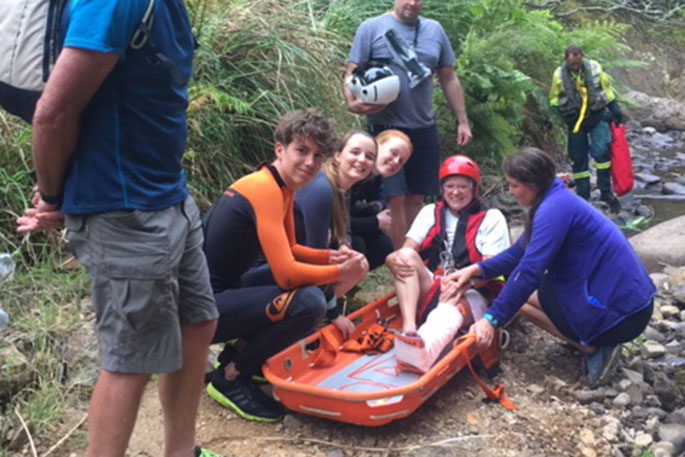 Despite being a vital community service, the TECT Rescue Helicopter is only partially funded by the government.

The service’s commitment to exceeding government standards means that ongoing change and improvements to the service are constantly being made, despite significantly increased costs.

The charity relies greatly on generous donations from the public and the support of sponsors to make up their annual operating costs of $3.05 million. Their principal sponsor is local funder TECT.

Since 2003, TECT has supported the TECT Rescue Helicopter with over $2.6 million in funding to help cover operating costs. $600,000 of that was approved last year to support the charity over three years.

Philips Search & Rescue Trust Marketing Manager Sharni Weir says that with each flight costing around $8,000, and with over 36 missions made every month across the Bay of Plenty, TECT’s funding is vital to the charity’s ability to save lives.

“We are so thankful for TECT’s ongoing and loyal support. Without the generosity of sponsors such as TECT we would not be able to be there for our community 24/7, 365 days a year.”

TECT Deputy Chairperson Natalie Bridges says the TECT Rescue Helicopter is an obvious choice for TECT to be aligning with and supporting.

“TECT’s most critical role is to serve all the residents of the Western Bay of Plenty, providing through community grants the infrastructure, the services and the vibrancy that we all need and want for the place in which we live. The TECT Rescue Helicopter is all of those things.

“When you need the helicopter, you need it, and we want to make sure it’s here for our community, and that’s what TECT is all about. I know that the helicopter has a special place in the hearts of the people who live here, so it’s extremely heart-warming and it’s a huge privilege to be part of it.”

“The rescue helicopter is something that all of us in the community could need at some time. Over its 20 years, 3000 lives have been delivered to trauma care within that golden hour, and most of them have survived.

“Every time people see the helicopter fly, it’s costing around $8000, but it’s almost always a life saved. If you try to put that against what it costs to run the helicopter, those lives saved are priceless.”