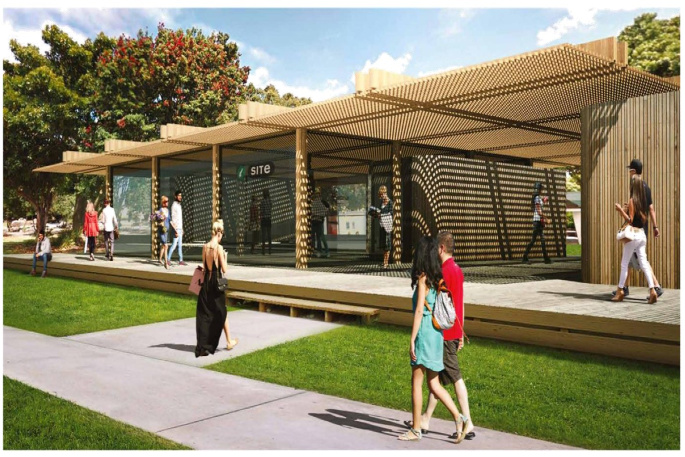 One of the proposed designs for the Mount Visitor Information Centre.

Tauranga City Council have decided not to go ahead with building the Mount Visitor Information Centre, planned since 2015.

Due to ‘growing demands on council’s limited funds’ general manager of Community Services Gareth Wallis says it is ‘prudent to review spending’.

Councillor Heidi Hughes says it’s not the time or place to be spending money on information centres.

A report prepared for the council says after reviewing the cost estimates for the project the original budget would likely be insufficient.

Tourism Bay of Plenty chief executive Kristin Dunne says she is disappointed the project will not go ahead for an already hard-hit tourism industry.

Other councillors are concerned Tauranga may not be well equipped when the cruise industry finally returns.

“We don’t know how many are going to come and we need to be ready for that, are we going to realise we need something in two years and not be ready for it?” says Councillor Larry Baldock.

A temporary i-SITE will be at Te Papa o Ngā Manu Porotakataka park in Mount Maunganui over summer to provide information support for domestic visitors.

The $980,000 set aside from the Provincial Growth Fund will not be used and the $98,000 already paid will be refunded to the Ministry of Business, Innovation and Employment. Council funds of $450,000 of had been set aside for design work this financial year.

The initial cost estimate for the info centre in Coronation Park was around $1.3 million, however in 2017 architectural firm Jasmax presented two options to council, with estimated costs of $4 to $5 million.

At the time council approved the $4 million option and directed Tourism BOP and council staff to seek the additional $1 million from other sources to achieve the more ‘iconic’ concept. Several funding applications were unsuccessful, before being approved $980,000 from the Provincial Growth Fund.

The info centre was designed to be a ‘gateway’ for cruise ship passenger arrivals as well as visitors to the region.

Well thank goodness for that! What we need is a hatchet man completely axing every non-essential council project in the works until further notice. I hope the govt appointed commissioner has a very very sharp axe. 4 Million bucks for a big glass greenhouse? It looks like something you can buy from Bunnings FGS. Architectural firm Jasmax has highlighted an issue here for us. They should have been turned down instantly for not meeting cost criteria and sent back to the drawing board! I bloody hope they haven’t been milking the ratepayers over this time drawing plans etc. Ridiculous!!! Thank you to Gareth Wallis and Councillor Heidi Hughes. Sharpen your axes and keep hacking away at council expenditure and we will keep you on.

Surely rebuilding the Tourist Information site is more important than the planned one way street along Pilots Bay. Tourists bring money to the area.

"Gareth Wallis says it is ‘prudent to review spending’." Perhaps Gareth would care to apply more diligence to dreamy projects in the pipeline? Maybe have a serious chat with his colleagues out the back...

No surprise to see who wants to charge ahead despite it being 3 times the budget - Baldock. Why are ‘designers’ creating plans that cost 3 times the budget? That is incompetent. Don’t pay them. But when the Council calls it’s just seen as an opportunity to grab as much as you like because it’s a bottomless pit of money.

To fund a much needed service Every city or town in NZ and the world has one and is generally the first stop for anyone visiting to get ideas etc on what is available to visit and spend their money on. I visited the Dunedin version last year on a cruise and was impressed with the friendly and calm service as basically a boat load overwhelmed them. We had a tent on the Mount wharf!

For the next two/three years and with the internet, who needs a $4/5 milloin information center ???

$4 to $5 million - how was that justified. What the heck sort of mansion was it to be?

I hope council didn’t pay anything to Jasmax. Surely the brief was to design something within a budget of $1.3M, not $5M with their elaborate design.