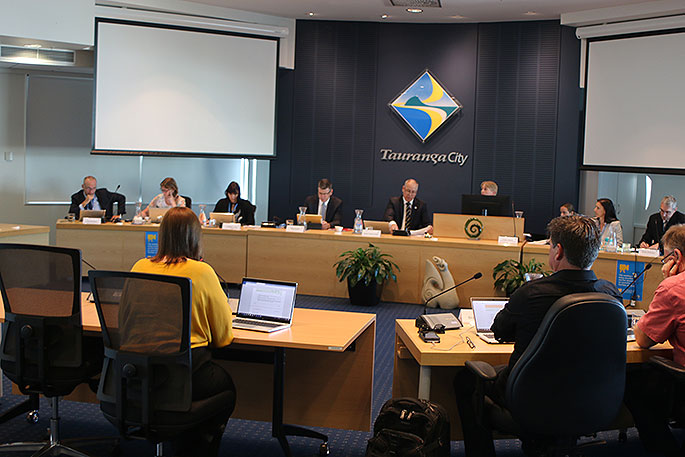 Council has 10 working days to respond to the Minister’s letter of intention.

The Minister of Local Government is signalling her intention to appoint a commission for Tauranga City.

Minister of Local Government Nanaia Mahuta has confirmed the Tauranga City Council has been advised of her intention to appoint a commission in response to significant governance problems among the Council’s elected representatives and the findings of an independent review.

Tauranga is facing a fiscal hole of $2 billion after a turbulent year marked by bitter infighting among councillors.

The city's leadership had been in the hands of the Minister for Local Government Nanaia Mahuta after Tenby Powell's resignation in November,

“I have been closely watching the conduct of the Council for a number of months. I have grown increasingly concerned at the governance issues, and the impact this has on Tauranga ratepayers and significant investment in the region," says Mahuta.

"The Council was given the opportunity to address the concerns, but has demonstrated that more direct action is needed.”

Tauranga City Council has 10 working days to respond to the Minister’s letter of intention.

The Council’s response will be considered before a final decision is made.

“For the ratepayers in Tauranga, I know certainty is important. I am keen to make a decision quickly so that Tauranga can get on with its critical planning and investment.”

As the process is ongoing, no further comment will be made.

Acting Mayor Tina Salisbury says the Council will respond to the notification by December 18 and anticipated that the Minister would make a final decision early in the new year.

She says that if the appointment is confirmed, a Commission would take over all matters relating to governance, effectively replacing and taking the role of the council’s elected members.

“Our community can have confidence that council’s full range of essential services and activities will continue to be delivered professionally, effectively and without interruption," says Salisbury.

“That will include progressing the preparation of our critical 2021-31 long-term plan, ready for consultation with the community early next year.”

at a time when I was dealing with a staffer in senior management, she suddenly left the building. Around the same time, I was aware others did, and have done since. There have been issues with staff having too much input for far too long.

As Tia says business appointees ..oh but Tenby was elected on that basis as having experience. However didn’t work because he was undermined at every turn and his frustration and ours along the way became too much, bring on commissioner to sort out council and staff

Staff are the actual planning and officers who design and submit reports to council . Greerton a good example of work of design and execution that ran over time , cost more , had council staff standing around and directing all to a big fail that chokes traffic flow worse than than ever. Greerton wasn,’t broken just needed a tweak or two not a giant cockup. Then the parking building and never forget Bella. Vista and a list a lot longer. Even now the plan 27 change complete a stuff up on several levels putting out out of date letter and meeting times. Now unable to set up meetings at all as no appointments available.list could go on...

ANYONE who sees public service as a nice little trip on the gravy train, has no right to be there. "usandthem" points out that it isn’t just the Council and he/she is right. The base values of wanting to serve need to be reinforced. Maybe we should NOT pay councilors at all, or maybe there should be a token stipend and payment of auditable expenses. The wages of senior staff should be performance linked. We don’t need self-important Mandarins and Pooh-Bahs in these jobs. Council is not a career path, and neither is it an opportunity to grab what you can while you can. All of us need to scrutinize the candidates more carefully and then vote. And the importance of voting cannot be over-stressed; it might be a little bit inconvenient on the day, but look what happens if we get it wrong...

.....if only it could be confirmed now and started immediately..I would prefer in the near future a local council working for the people (important bit) ideally rather than coming to this, but right now if we as a City can present itself as a solid, rational and well run city, maybe, just maybe we can come out of this reasonably well. Please bring on the commission to reduce the dysfunction...

Firstly, a number of comments relate to Council employees. Staff are directed to make decisions on the basis of what Councilors decide so don’t knock the staff. Secondly, Some if not all are out of their depth in managing a multi-million dollar business. They have no expertise in this type of business (and yes, it is a business) because it is far too easy for them to make a decision and when it turns ’pear shape’ the poor ratepayer will have cough up to balance the books. So here is an option. Change the electoral system so that 6 councilors are appointed and 4 elected. The 6 appointees should come from a business background to manage the business as it should be.

If the Wellington boffins are now to do the job, are our councillors made redundant? Are they still to be paid a salary? Who knows, but rest assurred that the ratepayer will PAY.

Elected members struggle to differentiate between governance and operational, evident by getting involved with trees on berms, along with the bad behaviour Im looking forward to the Minister cleaning them out. Doth bother at the next elections.

What do we Get?

If the Govt appoint a Commissionaire who actually runs the show,I am led to believe the TCC staff report to the Comm. 2. Do we now scrap the both bye elections and save money or do we have a clayton,s Mayor. Adern was not in favour of appointing a Comm what has changed ,who has got in her ear.All I can say is GOD help us hope you all have deep pockets because this will cost us in rate rises!

And so say all of us. Slash and burn required starting with the CEO and Larry Baldock. Less democracy, more efficiency. Stop wasting MY money you bunch of incompetent thieves.

Certain councillors must never be re-elected. Their petty childish behaviour and ego trips have brought ignominy to this City. I have watched live streaming of meetings and have been shocked that such people think they can represent the ratepayers. Shame on them! Mayor Tenby was the choice of a large majority of people for a reason now plainly obvious. .

Ten days too long. Quit the talking and just do it. As the Professor said, get those bums twitching and out of there. (Take my expression of it any way you want). Merry Christmas Tauranga.

agree wholeheartedly! Can only hope there is a hefty sweep out behind councillors.

I agree we have to rein in the out of control employees of the TCC, they put themselves on a pedestal but the truth is most are incompetent as evidenced by the number of failures and not acceptable. I hope in 10 days time a commissioner can be appointed to run this City.

Good news as in difficult times we need efficiency in purpose and finance. Hopefully the government will realise we need financial help too. Would also be good to shake up the bureaucracy and get the staff in line for all the cockups that we have suffered and the waste of time and money ..everyone knows the list that have been wrought by bad decisions and poor planning

I wonder how many bottoms are twitching within the Council now? This is long overdue but let’s hope it’s going to be of benefit to the Tauranga rate payers. A serious shakeup is needed and the deadwood chopped away!!

They also do something about the arrogant,self serving senior staff that think that the ratepayers are a bottomless money pit to satisfy their oversized egos.