New app to detect plants at risk from myrtle rust 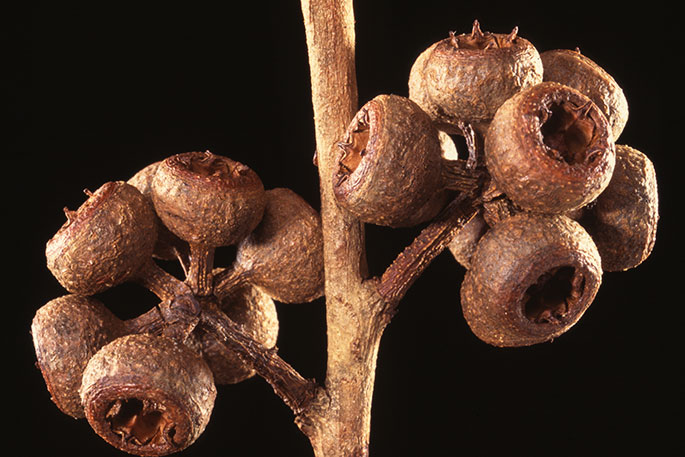 Capsules (also known as gumnuts) of Eucalyptus pilularis. Features like this can enable users of the NZ Myrtaceae Key to identify species of interest. Supplied photo.

People keen to support the fight against the fungal disease myrtle rust, which threatens many of Aotearoa-New Zealand’s native trees, shrubs and climbers, now have a new tool to help identify vulnerable plants in the myrtle family.

Manaaki Whenua – Landcare Research and Biosecurity New Zealand have partnered in the development of the NZ Myrtaceae Key – a free app that makes it easy for citizen biosecurity volunteers to identify susceptible plants and keep an eye out for the fungal disease myrtle rust.

Myrtle rust has already spread across the top half of the North Island and cases have been recorded as far south as Greymouth.

“We know how much damage plant pests and diseases are causing overseas, and science partnerships, like this, will help us stay ahead,” says Veronica Herrera, MPI's diagnostics and surveillance services director.

The NZ Myrtaceae Key is a Lucid identification tool envisaged and funded by Biosecurity New Zealand and developed by botanists from Manaaki Whenua, the National Forestry Herbarium, Unitec, and other experts.

The app is easy-to-use, interactive and comprehensively illustrated with more than 1,600 fully captioned images built in and it is downloadable for both iPhone and Android smartphones.

“The key includes more than 100 of the most commonly found Myrtaceae species, subspecies, hybrids and cultivars in New Zealand. Of these, 27 species, such as the iconic pōhutukawa, mānuka and kānuka, are indigenous to New Zealand: others, such as feijoa and eucalyptus, are exotics of economic importance,” says Dr Herrera.

“The disease is a threat to the important and substantial mānuka and kānuka honey industry. Using the new app to accurately identify species of Myrtaceae in New Zealand will make it easier to monitor and report cases of myrtle rust.

“By using the key, anyone, from farmers and trampers to gardeners and park users, will be able to identify plants to check for and report the tell-tale yellow spores, and diseased leaves,” says Mr Dawson.

To use the app, the characteristics of the plant being identified are entered, the app then sorts plants possessing these features, and it rejects those that don’t match. By progressively choosing additional features, the key will eventually narrow the results to just one or a few matching species.

Once you’ve correctly identified a plant in the myrtle family and if you think you see signs of the disease on it, don't touch it.

If you have a camera or mobile phone you can take a photo and submit it to the iNaturalist website. Experts can check to confirm whether it is myrtle rust.

Capturing this information makes it available to agencies and scientists to analyse the rate of spread and observed impacts.

The NZ Myrtaceae Key is available from the Google Play (Android) store and the iPhone app store as a mobile (smartphone) app suitable for undertaking identifications in the field, or through a web-based browser hosted by Manaaki Whenua.