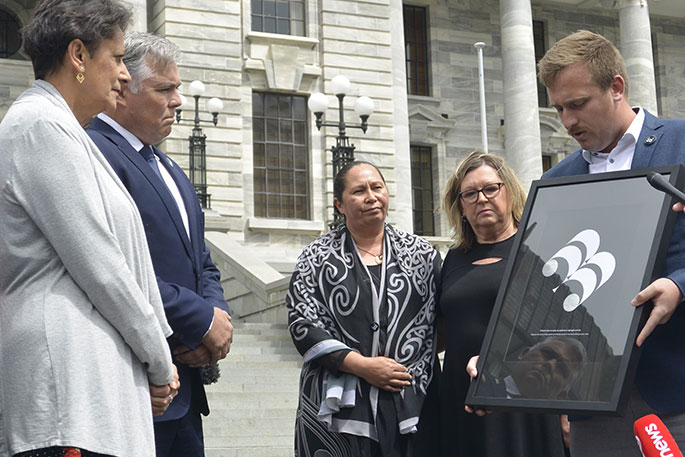 MPs gathered on the steps of Parliament’s forecourt to receive the petition from Diane and hear her recount the events of her son’s death and her plea for a change in sentencing laws for those guilty of murdering police officers.

Twenty-eight-year-old Constable Hunt was shot and killed while carrying out a routine traffic stop in West Auckland in June. He had been a police officer – fulfilling his life-long dream – for only two and half years.

On July 30, on what would have been Constable Hunt’s 29th birthday, Diane Hunt launched a petition in honour of her son and the 32 other New Zealand police officers who have been killed in the line of duty.

The petition calls for the Sentencing Act 2002 and the Parole Act 2002 to be amended so individuals convicted of murdering a police officer receive a mandatory life sentence and have their parole eligibility automatically declined.

Between its launch and close, 39,286 New Zealanders signed the petition.

“The reason for my petition is simple: Matthew’s death is a sobering reminder of the daily sacrifice our police officers make to ensure we can continue to live our lives in the manner in which we are accustomed: that should we need them, they will come,” Ms Hunt says.

“Any attack on a Police officer in the line of duty is an act against the badge, not the individual.

“I believe the laws as they currently stand do not adequately condemn such acts against our police, especially those that result in death.

“Thirty-three police officers have been killed in the line of duty in New Zealand, beginning with Constable Neil McLeod in 1890 and most recently with the death of my son, Matthew.

“Our laws should reflect community expectations: if you kill a police officer in this country - those who protect and serve us - you will receive a mandatory sentence of life in prison with no parole,” Ms Hunt says.

With the rate of gun-related crime increasing in New Zealand, and police attending more situations involving firearms, Diane Hunt believes the amendments would send a clear message that pulling a firearm on a police officer will not be tolerated. Currently those convicted of murder are eligible for parole after 10 years in prison, or when their court-imposed minimum non-parole period ends.

“Matthew’s death will not be in vain. I continue to advocate in his name for sentencing and parole law reform, and improve conditions for the New Zealand Police,” concludes Ms Hunt. 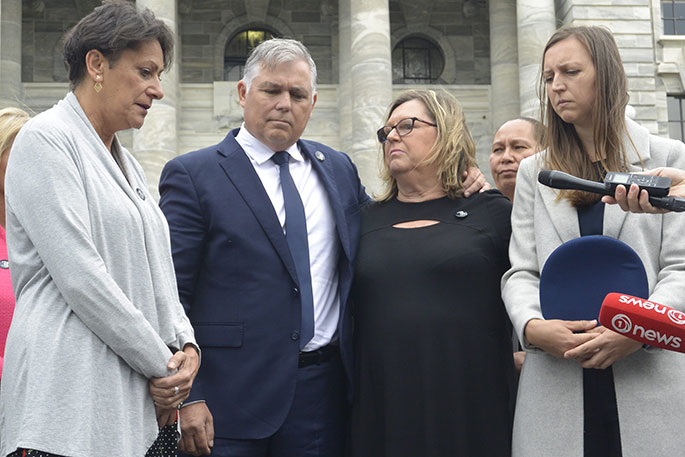 The Hunt family commissioned a taonga in honour of the 33 police officers who have been killed in the line of duty. The taonga is a bespoke emblem, which has been printed and framed.

Diane handed this over to Members of Parliament as part of the petition presentation today, asking them to use it as a reminder of each and every one of the 33 lives that have been lost in service, and ensure their memories are imbued through the Select Committee process.

We all feel for her loss and the loss of all the officers killed in the line of duty. Something has to be done and I believe that a more concerted effort to crack down on illegal firearms should be a big part of that. A life sentence is reasonable; but execution would be cheaper. (It seems crazy to me that we should feed and clothe these thugs for years at a cost of hundreds of thousands of dollars. Give the family a large grant and execute the low-life who killed the cop. Uncivilized? Maybe, but it is fair...

Thank you Diane for the effort you have made to make this happen. My father died in the line of duty here in Tauranga 51 years ago.