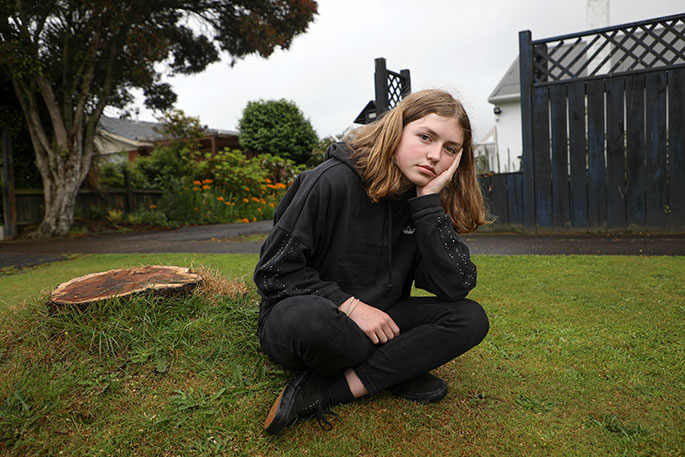 Mia Sandison, 12, with the stump of the kōwhai tree near her home. Photo / Andrew Warner / Rotorua Daily Post.

Jennifer Sandison scrimped, saved and "sacrificed a lot" to get on the property ladder.

When she finally found her home, she fell in love with a "lush" tūī-laden kōwhai tree on the front berm, even burying her 12-year-old daughter's placenta underneath it, now that home was finally permanent.

On Friday, she returned home from a school trip to the beach to find the tree - which is on council land - had been cut down.

“We had a great day - up until returning home to the homicide of my tree.”

On Tuesday, Rotorua Lakes Council sport, recreation and environment manager Rob Pitkethley said the tree had a structural defect but the council is now considering reviewing its processes around communicating with the public about tree removals.

Sandison told Local Democracy Reporting she felt like she had “been burgled” when she saw the tree was gone.

"It p***ed me off, they didn't communicate with me. I'm dumbfounded.

"It doesn't seem right. I want to know what was the rationale for cutting down a 30-year-old native tree?"

She says the only reason to fell the tree she could think of, was if the tree was unsafe, but the "stump is healthy right the way through".

"It was quite a solid tree."

She felt the stump could now be a hazard for cars or people, and the best outcome now would be for an apology and for the council to change its process.

Sandison says the council had also pruned the tree just a week before felling it.

A single mum to Mia, 12, Sandison says it was her child’s “first introduction to local government”.

On Tuesday, a council staff member responded to Sandison, and told her there was an “unprunable structural fault in the tree”, she says.

She says the council staff member had apologised that there had been no communication with her about the decision to remove the tree.

“They insist they have done the right thing.”

Sandison says she believes the tree was healthy and still disagreed with its removal.

"I was shocked. Had it been my tree I would have been disappointed.

"The issue is communication. I feel sorry the council didn't communicate to [Sandison]."

Pitkethley says trees in public areas needed to be removed due to decay or damage from time to time, for safety reasons.

He says the tree outside Sandison’s property had a split at its base that was a “structural defect that could not be pruned out” and the other kōwhai that was removed was “heavily decayed”.

The stump will be removed and a new kōwhai will be planted in its place during the planting season in autumn next year, Pitkethley says.

“Pruning took place before the removals because of an overlap of two work schedules. One crew carried out scheduled street tree maintenance and pruned the trees along [the] street. 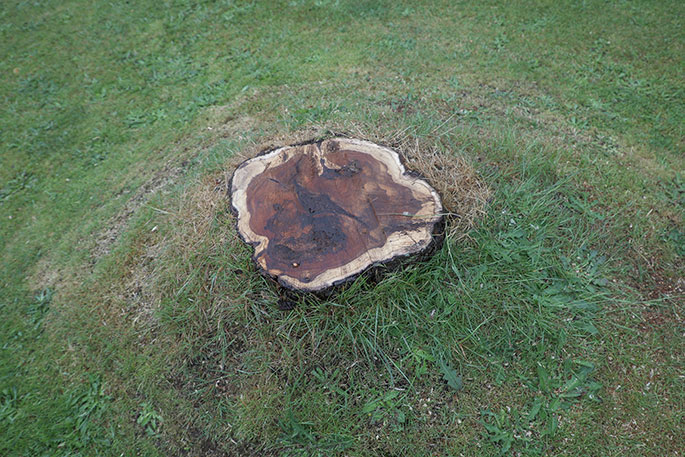 “The kōwhai tree was then felled by a second crew that is responsible for the removal of trees.”

Pitkethley says it is not been “usual practice” for the council to notify residents of tree maintenance or removal unless it could impact access to properties or was a health and safety concern.

“However, we acknowledge residents do appreciate the natural character of their neighbourhoods and are considering an improvement to the process providing information to residents about the reasons for tree removals.”

In August, Tauranga city councillors voted unanimously to allow the removal of an avocado tree - thought to be at least 44 years old - on a suburban berm in the city.

In that case, property owners had proposed to remove the tree and were required to gain resource consent to do so, triggering a public feedback process.

According to the Department of Conservation, three species of kōwhai are listed as “naturally uncommon”.

“This recognises their restricted ranges and suggests some level of conservation monitoring to ensure they aren't in decline.”

Other species, while still relatively common, have “suffered significant loss of habitat through past forest clearance for agriculture,” the department’s website states.

Native birds such as the tūī, korimako, kākā and kererū all benefit from kōwhai trees, it said.

Predator Free New Zealand and Forest and Bird Rotorua were sought for comment.

I only reported the conversation, Terry. I never bothered to check whether it was true or not. I hope it isn’t. The fact is, there was nothing I could do about it anyway, so it would be a waste of time and energy to try and get answers from Council...

At least the Council is thinking

Some Maori are taking the piss. They want everybody to accept their values and understand Te Reo.. BUT they want to be paid for being Maori, NOT for skills or anything else worthwhile ....and who ever said the council has to get permission to plant a tree, that is the limp wristed faction of local government idiots , pushing for laws which are non sensical, and then taking the literal interpretation ton the absolute limit. WE ARE ALL NEW ZEALANDERS, we all have a say in local government, we should all have equal rights to our views . We all want native trees , NOT exotics in public places . Council has NO RIGHT to exclude any of us from that process.

why have we got to get iwi approval to plant a kowhai tree for gods sake this country is becoming absolutely ridiculous,

You’d think it would be simple; cut one down, plant another one. A kowhai was also removed from my berm some time ago and when I questioned whether it would be replaced I was told: "We are replacing it with a Japanese crab apple." I don’t believe tuis ever developed a taste for these. "Why not another kowhai?" "Because we have to get iwi approval to plant any native tree and it costs us". I promise you that was the conversation, verbatim. Maybe he was right, maybe he was wrong, but I treasure the kowhai on my property which they cannot touch, and my neighbours have a frangipani and have planted flax, which brings tuis in the Summer. Urban encroachment and the adaptation of native species to it is quite amazing to watch.

It’s always annoying when ’others’ take out trees without considering those around the location. At my address a neighbor has spray-nuked three 20 year old reserve trees. The only solution is a new planting but the 20 year wait, as with the kowhai tree site, is a sad long wait. Hopefully the council will react by leveling the verge and re-grass before planting the biggest kowhai tree they can find.

Sadly you are not alone on problems with councils poor communication. The tree may have needed to be removed as structurally compromised but it would be nice to know, not that it would make much difference. I’m getting annoyed with Tauranga city and poor communication over out of date letter and lack of meeting times to discuss plan 27 changes regarding flooding. I will not give up until someone can make some sense, well hoping anyway ...but

Such is life. Perhaps you could ask your new friends at Council to trim a ring off the stump so you can have it. Then once it’s dried you can use it as a cake stand for Mia’s 21st, or for a platter when visitors come, or have it made into a clock . . . Oh look, it’s a new day.

Resource consent was not required for the avocado tree removal but for the private buildings next door. The tree removal was consulted on seperately as it is a healthy tree that did not need to be removed but for a minor conveniance of one person