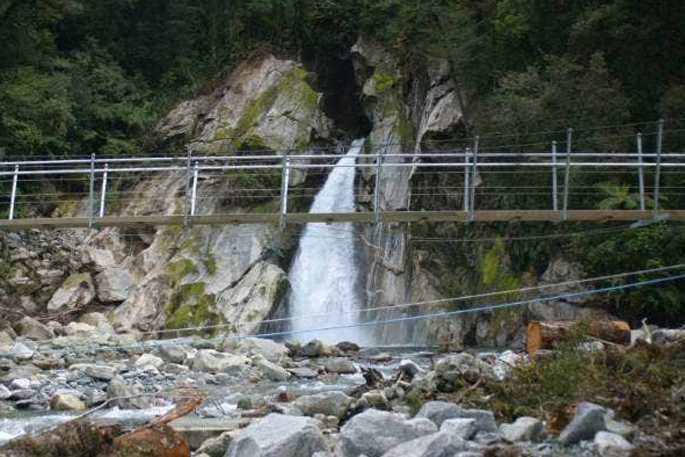 Giants Gate Bridge sits on the iconic Milford Track. It had to be completely rebuilt after heavy flooding in February wiped out the previous version. Photo: Louisa Steyl/Stuff.

One of New Zealand’s premier hikes and a cornerstone of the Te Anau community, the Milford Track has officially reopened.

“From today, hikers booked on the popular Great Walk will be able to complete the walk end-to-end for the first time since early February,” says Minister of Conservation Kiri Allan.

From Monday November 30, the Milford Track is open from end to end – the entire 54km – from Glade Wharf to Sandfly Point.

Key repairs to the most damaged sections of the Milford track and bridges have been completed, however some minor repair work is still to be undertaken over the coming months.

“The reopening is a milestone in the flood recovery work taking place in the Fiordland and Mt Aspiring national park areas,” says Kiri.

“Having the Milford Track officially reopen for this year’s Great Walk season is testament to the hard work achieved by both the Department of Conservation and the many contractors involved in the rebuild work.

“Like many places in Aotearoa, the Te Anau community has been hard-hit by the COVID-19 tourism downturn, and coupled with the flood damage to key recreation experiences in the area they’ve had an extremely difficult year.”

The Milford Track, along with the nearby Routeburn Track were among the 78 tracks damaged when a three -day storm saw one tenth of the region’s average annual rainfall dump on northern Fiordland between February 4 -6.

This sparked a major search and rescue operation, damaged 440 km of tracks and wiped out key infrastructure including parts of the Milford Road, while Lake Howden Hut on the Routeburn track was hit by a landslide in the middle of the night.

“Completing repairs and getting this iconic track back up and running has been a priority for DOC to support the local community and show the area is open and welcoming visitors this summer season,” says Kiri.

$13.7million was announced in Budget 2020 to go towards repairing vital conservation and visitor infrastructure destroyed in the February flood.

The Milford Track is a world-renowned feature of Te Wāhipounamu - South West New Zealand World Heritage Area and is called the “finest walk in the world”. The track retraces the steps of early explorers from the head of Lake Te Anau to Milford Sound/Piopiotahi.

Every year demand for a place on the iconic track is high. This year, when bookings for the summer season opened, it sold out completely within an hour.

“The Milford Track is truly a bucket list experience for people around the world, but it’s by no means the only track Fiordland has to offer,” says Kiri.

Hikers are asked to follow all signs and instructions while on the track.

The section between Dumpling Hut and Sandfly Point, in the Arthur Valley, was closed due to the significant damage from the huge storm that passed through the region on February 3 2020.

Walkers will be leaving Te Anau Downs Wharf, by boat, heading for Glade Wharf on Monday with two commercial operators – Fiordland Outdoors Company 10.30am and 2pm and Real Journeys with 2pm departures. The first group of walkers will complete their four day/three night Great Walk at Sandfly Point on Thursday December 3.

“This summer is a great time for Kiwis to connect with their heritage and explore the thousands of incredible nature-based experiences around Aotearoa and support local communities everywhere,” says Kiri.

“Plan ahead, let someone know before you go, check the weather and track conditions and make sure you take the necessary food, water, clothing and equipment and have fun exploring your own backyard.”

Repairs across all damaged tracks is estimated to be a three year programme.

The Routeburn track is currently scheduled to reopen in full from December 7.