Going through the gears 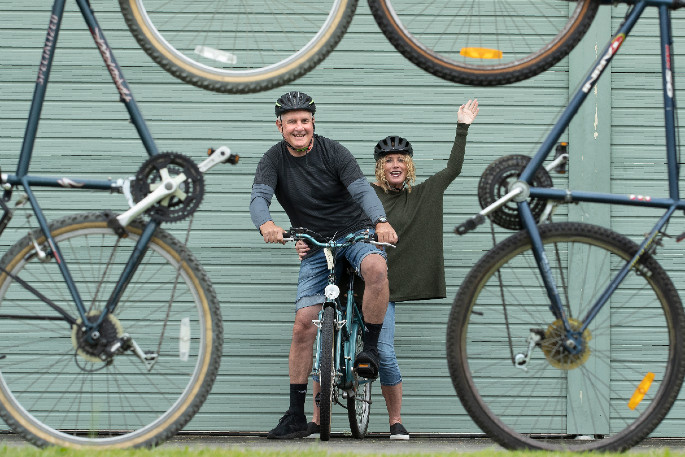 Allastair and Kelly Mouat have been busier than ever lately as part of a couple of local charity drives. Photo: John Borren.

A team effort, 16 hour days and 70-hour weeks have gone into getting 300 bikes ready for the Good Neighbour bike drive.

The people in charge of storing the bikes are Allastair and Kelly Mouat.

The couple had plans to go to Australia to attend to their business at the start of the year but decided to stay after the borders closed.

Having some free time in New Zealand and storage space available in their hanger, meant the couple could volunteer.

For the last month, Allastair and Kelly have spent 70-hours-a week collecting and getting bikes ready for a new home.

The bike drive started on October 19, people were asked to drop unused bikes at Mount Maunganui bike store, My Ride.

It was then Allastair and Kelly’s job to bring the bikes back to their hanger. On their busiest day the couple made several trips to pick up 25 bikes.

It was Kelly’s job to match the bikes with the correct size and age of the person. This was mostly done for children but also for a few adults who were in need of a bike as well.

Allastair says the bike drive was a massive team effort. He says sometimes people would be working on the bikes for 16 hours, as different people came over throughout the day and night to do their bit.

He says their neighbours are a huge help, “they offered hanger space to store the bikes, they offered parking. One woman just turned up to help clean bikes”.

Lex Spencer is the main bike mechanic for the project. He got his start fixing bikes for children in Taranaki after he retired from dairy farming.

What started off as Lex only fixing a few bikes, turned to fixing multiple bikes for children in his Taranaki district.

Lex now lives in Tauranga and continues to fix children’s bikes for the Kids Can Ride program. He also helped Hospice by cleaning and servicing donated bikes before they went for sale.

Lex says the bike drive was a really big job.

“They’re always a bit worse than you think they are.

“Every little bike down there has probably had something done to it.”

But Lex says it was a great working experience.

The first bike was gifted on November 25 and all the bikes should be in new homes by December 6.