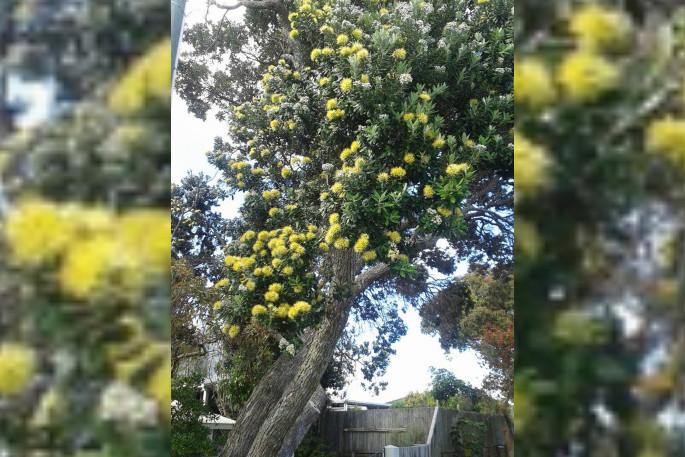 One of the many highlights of the Pepi Toot train ride around the streets of Mount Maunganui is a brief stop at a yellow pohutukawa in one of the quieter side streets.

Passengers excitedly whip out their cameras to capture photographs of the yellow flowers before the train moves on.

Commonly, pohutukawa trees are known for the bright red flowers which can completely cover the tree with clusters of long, red stamens during December and January, turning the tree red. 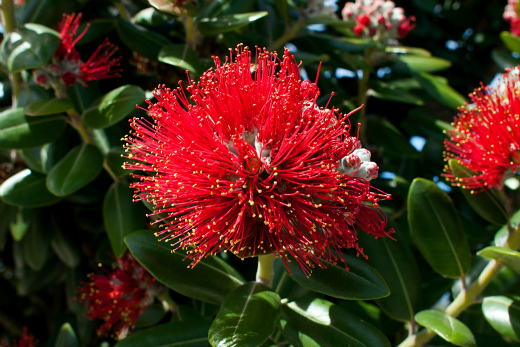 For many Kiwis, the appearance of crimson pohutukawa flowers, usually during November, marks the beginning of the Christmas festive season and summer.

This is also the origin of the pohutukawa being regarded as New Zealand’s ‘Kiwi Christmas tree’, and the tree has become iconic, often featured on greeting cards and in poems and songs, and is an important symbol for New Zealanders at home and abroad.

Pohutukawa are native to New Zealand and are part of the myrtle family. Legend has it that the early appearance of the pohutukawa flowers means there will be a long hot summer. 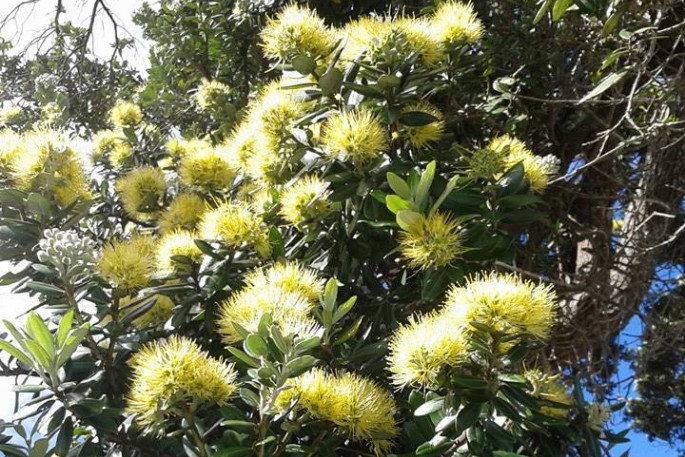 The yellow pohutukawa or ‘Metrosideros excelsa Aurea’ that appear around the Bay of Plenty are believed to have descended from a pair of trees discovered on Motiti Island in 1940 by a Mr Potts. These grew naturally with seeds given to nurseries to grow commercially, with the first trees going on sale at Duncan and Davies Nursery in 1947, and they now grow in many places around the North Island.

Yellow flowers on a pohutukawa do not stand out in such strong contrast as red flowers but they also tend to cover the tree. 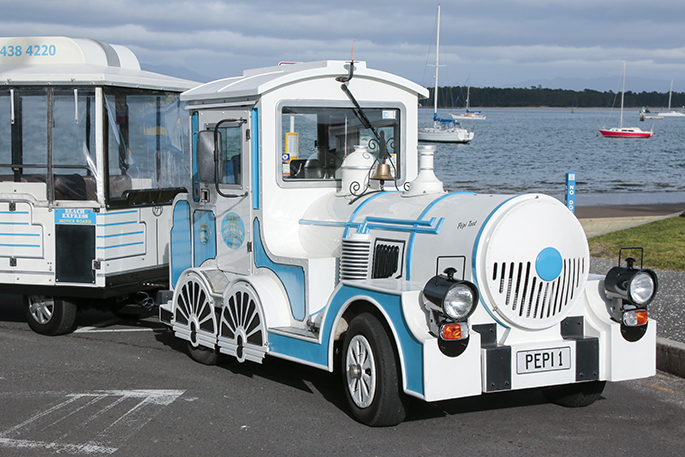 As well as being spotted by Pepi Toot train passengers while on excursions around Mount Maunganui, the rarer yellow pohutukawa has also been spotted on Cameron Rd, Fraser St and in Otumoetai.

The yellow Mount tree is not far from one of NZ’s oldest pohutukawa trees, which has been spreading itself magnificently in Pitau Rd, for what is believed to be about 450 years. Some time between around 1566 and 1616, a small seedling nudged its new frond up through the sand bar that’s commonly called ‘The Mount’ and has been growing and flowering ever since. 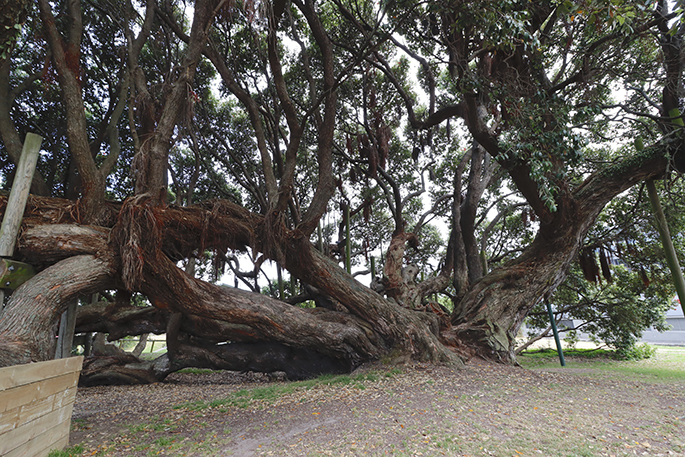 This was in the same time period that Pocahontas was saving the life of John Smith, Galileo saw the moons of Jupiter through his telescope, the King James version of the Bible was being published, the first African slaves were being taken to North America, the English Civil War was happening, Rembrandt was painting his Night Watch, the Ming Dynasty was ending in China, King Louis XIV was starting to build Versailles, the Great Plague in London killed 75,000, there was the great fire in London, and Peter the Great became Czar.

The variety Metrosideros excelsa ‘Mt Maunganui’ are all cutting-grown descendants from this tree, and it is of special significance to Ngai Te Rangi iwi.

Pohutukawa wood is dense, strong and highly figured. Maori used it in shipbuilding, since the natural curvy shapes made strong knees. 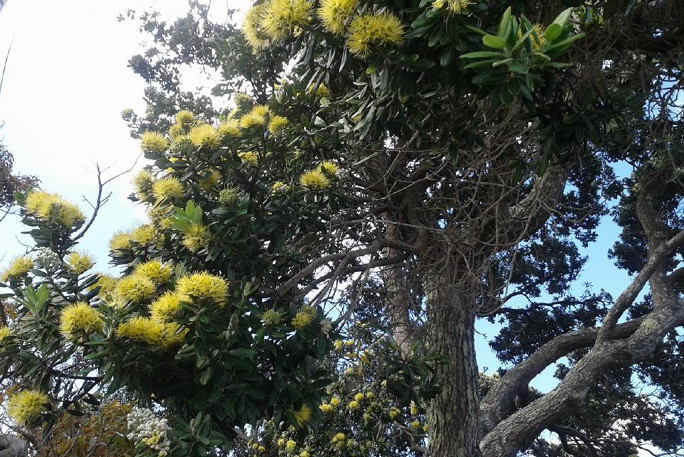 The yellow pohutukawa tree which can be spotted from the Pepi Toot train. Photo: Lesley Smith

The Pepi Toot beach train runs most summer days, taking families and cruise ship passengers for rides. Departing from Salisbury Ave, it travels along The Mall, to Adams Ave, around to Banks Ave, then right into Pitau St, travelling past both the yellow pohutukawa trees and the 450-year-old pohutukawa tree.

“Passengers always comment about two things that they enjoy while on the train,” says train driver Lesley Smith.

“One is the cleanliness of the Mount streets. The other is the 450 year old tree. It’s very popular.” 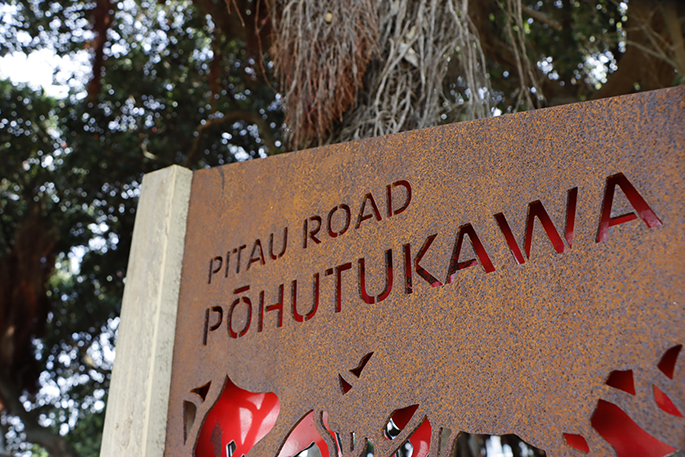 In 1833 the missionary Henry Williams described holding service under a ‘wide spreading pohutukawa’. The first known published reference to the pohutukawa as a Christmas tree came in 1857 when ‘flowers of the scarlet Pohutukawa, or ‘Christmas tree’ formed part of table decorations at a feast put on by Ngāpuhi leader Eruera Patuone.

Several years later Austrian geologist Ferdinand von Hochstetter noted that settlers referred to it as such. The pohutukawa, he observed, ‘about Christmas … are full of charming … blossoms’; ‘the settler decorates his church and dwellings with its lovely branches’. Other nineteenth century references described the pohutukawa tree as the ‘Settlers Christmas tree’ and ‘Antipodean holly’.

In 1941 army chaplain Ted Forsman composed a pohutukawa carol in which he made reference to ‘your red tufts, our snow’. Ted was serving in the Libyan Desert at the time, hardly the surroundings normally associated with the image of a fiery red pohutukawa tree. Many of his fellow New Zealanders, though, would have instantly identified with the image. 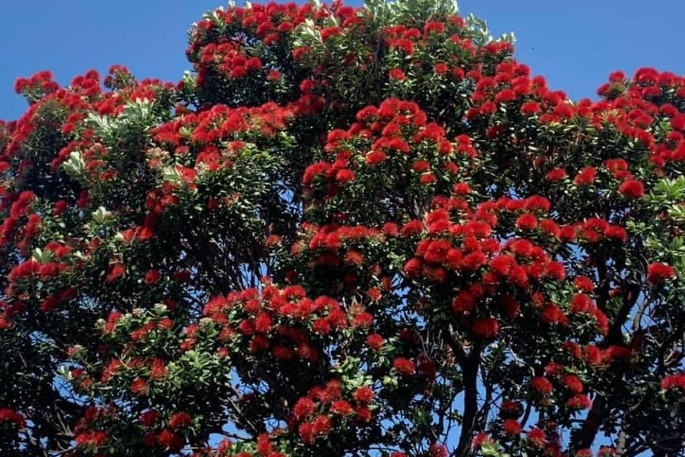 Today many school children sing about how ‘the native Christmas tree of Aotearoa’ fills their hearts ‘with aroha’.

Pohutukawa and its cousin rata also hold a prominent place in Maori tradition. Legends tell of Tawhaki, a young Maori warrior, who attempted to find heaven to seek help in avenging the death of his father. He fell to earth and the crimson flowers are said to represent his blood.

One of the nine visible stars that makes up the Matariki star cluster is Pohutukawa, which is regarded as the star that connects Matariki to the deceased and is the reason people would cry out the names of the dead and weep when Matariki was seen rising in the early morning. It is through Pohutukawa that Māori remember those who have died in the past year.

photo is definitely a yellow one.I know of a white one along Cameron rd,and one on a property in Mauangatapu