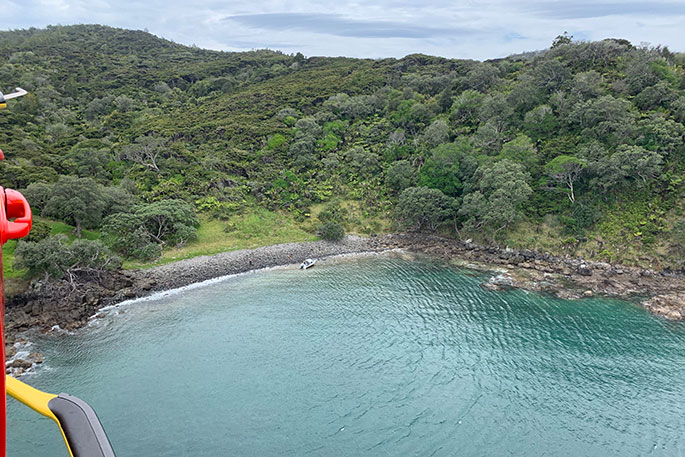 The boat started taking on water and hit the rocks in Potiki Bay, near Kennedy Bay. Photo: ARHT.

A woman has been winched from a boat in the Coromandel.

Crew from the Auckland Rescue Helicopter Trust were tasked by the Rescue Coordination Centre to Potiki Bay, north of Kennedy Bay on the Coromandel Peninsula on Friday.

This was in response to an activated personal locator beacon.

“The power boat that a male and a female, both in their 20’s, were on had started taking on water and the pair ended up on the rocks nearby,” says a spokesperson for the ARHT.

“Westpac 1 crew winched extracted the female patient, who was in a minor condition, off the rocks.

“Coastguard picked up the male patient. Both patients were assessed at the Whitianga rescue helicopter base.

“Transportation to hospital by helicopter wasn’t required and Westpac 1 was retasked from the base to Mission 1008.”