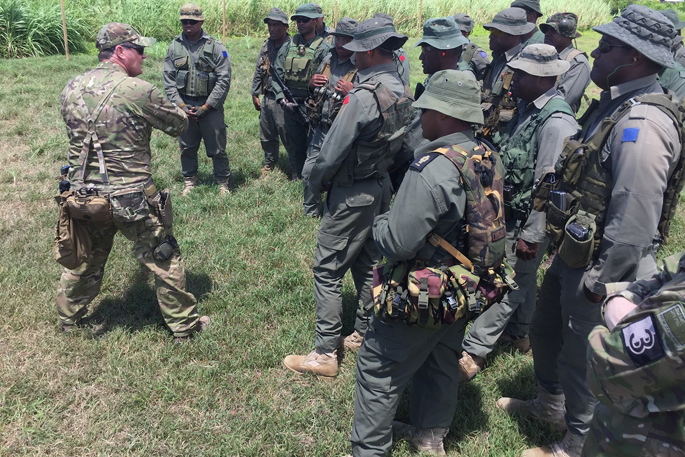 A New Zealand Defence Force training team is leaving Fiji this week having provided local troops with practical instruction in a range of areas from life-saving first aid to hydrographic surveying techniques.

The team leaves the Pacific nation saying the relationship between the two militaries is in good heart.

The 15-strong team began working alongside its Fijian counterparts in mid-October after completing 14 days’ managed isolation in Nadi.

It was the first time such a large group from New Zealand has deployed to Fiji to train, coach, mentor and embed alongside local military and defence staff.

The senior national officer for the training team Lieutenant Colonel John Barclay says everyone in the team had delivered practical information and techniques that would be of use to their Fijian counterparts.

Two NZ Army instructors conducted a course for Republic of Fiji Military Forces (RFMF) infantry shooting coaches. The participants then put into practice everything they had learned by delivering weapons training to 20 of their comrades in the Republic of Fiji Navy.

A member of the Royal New Zealand Navy taught a basic hydrography course to a group of eight Fijian Navy surveyors.

Lieutenant Colonel Barclay says it has been a real privilege to work alongside RFMF colleagues over the four weeks.

“We have worked with some exceptional soldiers and sailors. We have rekindled relationships built up over many years and established relationships with newer members of the RFMF.

“The Fijian people have a fantastic sense of humour and a love of all things rugby. The respect and fondness between our military personnel is strong and we can’t thank them enough for the support they gave us.”

New Zealand Defence advisor to Fiji, Lieutenant Colonel Josh Wineera says the effects of Covid-19 has forced changes to how the NZDF and RFMF engaged, but it had not diminished the relationship.

“In fact it’s the opposite. The deployment of the training team is a powerful demonstration of the NZDF’s genuine commitment to work with and deepen our relationship with an important Pacific partner.”

The team leaves Fiji today and will spend 14 days in managed isolation on its return to New Zealand.

Didn’t Bananarama stage a coup there and start killing people a few years back? I seem to remember threats being made against NZ and we were all advised not to go there. Has it changed? Isn’t it still a dictatorship that cut ties with the Commonwealth and invited the Russians in instead? I know my History is imperfect, but are these the people we should be giving military advice to? I’m all in favor of Humanitarian Aid, schools hospitals etc. but what possible advantage is served to us by strengthening the Fijian Military?