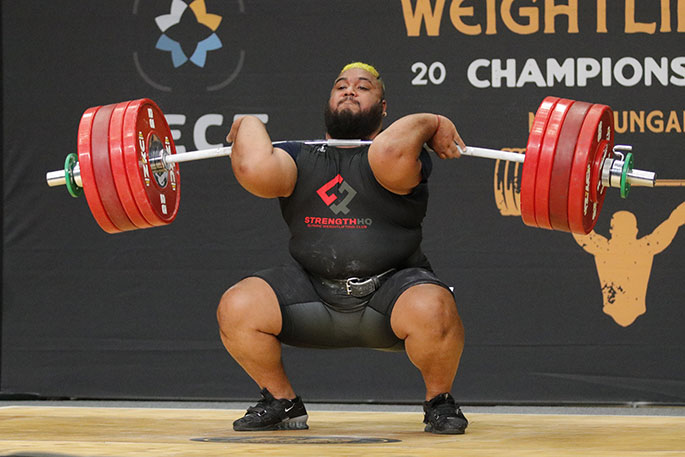 While not every event is suited to everybody's interests, most of them provide a ripple effect that not only benefits the region, but our people. And some even surprise us by sparking a new passion.

The Olympic Weightlifting National Championships is one such event that wrapped up earlier this month.

Held for the first time in Mount Maunganui this year, over 120 athletes travelled from around New Zealand and locally to take part.

With its growth over the years - now boasting more than 50 per cen female participation - the event has outgrown its usual venues, which were often local gyms that didn't allow for a large number of spectators.

Stephanie Symynuk is vice president for OWNZ and is one of the event managers.

She says Tauranga and Baypark was chosen as it allowed them to deliver the 2020 event at a level never seen before in New Zealand.

"Most of the event organisers are local to Tauranga, and wanted to bring our community of athletes to the beautiful Bay of Plenty. We see this as an ideally placed destination, and it's one that many New Zealanders love to vacation to.

"Baypark as a venue also added a deeper value level to this event by creating greater opportunities to capture not only the lifts on the platform, but the joy, passion and excitement of the supporting areas of the competition like the warm up area and athlete waiting bay."

A dedicated showcase of the talent and diversity within the sport at the highest domestic level, the free event had a large in-person and virtual audience through Sky Sport Next livestream, with 500 people coming through the doors each day, and livestream views of 23,000 over the weekend.

And it didn't stop there. Community outreach prior to the event also involved visiting local schools to talk about weightlifting and the positive impact of sport, to inspire the next generation of athletes.

As a burgeoning sport, OWNZ has over 40 affiliated clubs throughout New Zealand. Participation in Olympic Weightlifting ranges from recreational through to elite, and is also used as a training methodology to complement involvement in other sports. 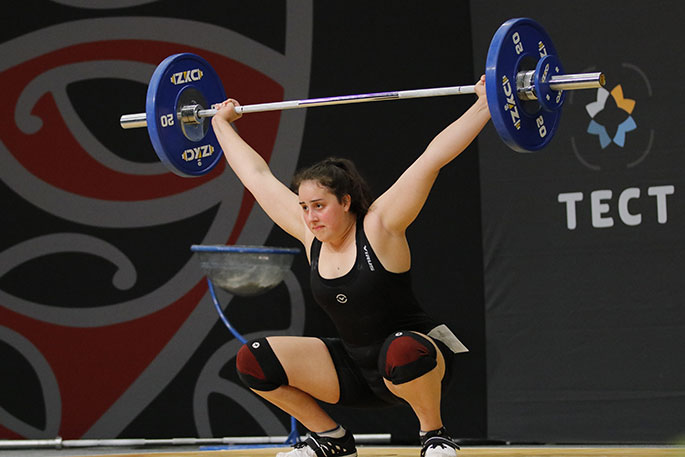 Felicity Beatson lifting at the Nationals.

It's a sport that has much to give to people of any age or background, as 16-year-old Tauranga local Felicity Beatson knows well.

She started lifting in early 2019 after her mother encouraged her to join something with other people due to her homeschooling schedule.

She lifted for the first time at Nationals this year, and says it was a completely different experience compared to other competitions she has done.

"I had been at Nationals all weekend – I trained there Thursday, and watched Friday and Saturday. It is such a different vibe when you're actually competing as I was on Sunday. It was fun to be in the crowd, but when you're lifting everything just felt so personal, I appreciated the set up much more, and all the volunteers.

"It was such a highlight getting to know the girls in my category, to have some good conversations and then even seeing them medal. I also feel like I've stepped up in my sport now, and I'm really excited for it."

While Felicity is an up and coming athlete in the sport, David Liti is well known for his win at the Commonwealth Games and as an Olympic hopeful. 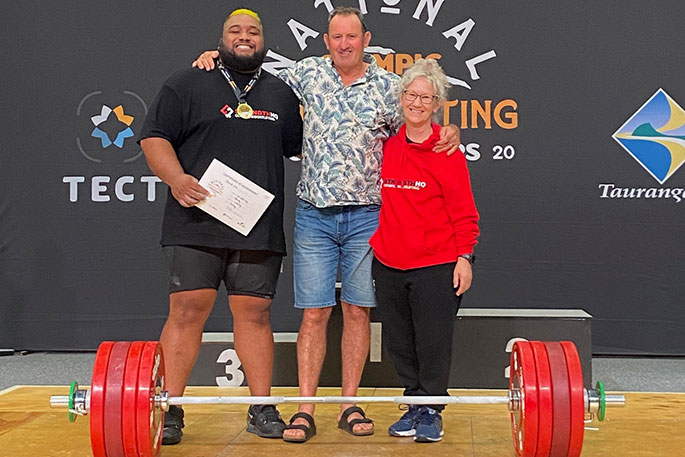 He competed at the Nationals in the 109kg+ weight class, and took out several records in the process, including the Commonwealth, New Zealand, and Oceania records.

David says the event was a lifesaver, giving him a new focus after the Tokyo Olympics were postponed.

"After the Olympics postponement, Nationals became the new focus. It was something to aim for, which is key for athletes' mental health, because if there is no goal, there is no reason for training.

"While it felt like a long build-up to the event with my last one being an online competition in July, it was worth it to tick off some of those goals and get some new records."

He says having Nationals in Tauranga took the event to a new level.

"They really came through with the event and venue, and everybody felt special because they were there. It's super important, no matter how small we are compared to the world, we still want to know who's the best in our own country, on our home turf. Nationals did that."

As well as impacting the many athletes who attended like Felicity and David, Stephanie says the event also brought with it economic and community benefits.

"Feedback from athletes has been that this event went above and beyond many international competitions they've attended, which is what we aim to bring to Tauranga in coming years and is part of our long-term vision for the sport in New Zealand."

"Hosting an international event brings with it increased economic and community benefits to Tauranga, and it will directly benefit New Zealand athletes. It has been several years since an international weightlifting event was hosted in New Zealand, and the cost of travelling for competitions is an expense that most athletes pay for themselves.

"We know we have the capability and the infrastructure to host world-class events here, and this year we were able to prove it. When the world is ready for international events, we want to be first on the list for consideration.

"There's also a community need to have exciting events to get behind. Nationals offered that both in satisfying a desire for competition, and seeing human potential in action, especially top athletes who have sacrificed much and spent many years dedicated to honing their craft."

TECT supported the event with $12,000 in funding to help with the operating costs, which Stephanie says was instrumental to the event going forward.

"After a particularly difficult year with lockdowns and uncertainty for upcoming competitions, we wanted to create an event for our athletes to celebrate their hard work, and to put Tauranga on the map for Olympic weightlifting events. We certainly achieved this. We couldn't have done it without TECT's support."

As one of the many athletes who got much out of Nationals, Felicity says she is grateful for TECT's support of the event which provided her with an amazing opportunity.

"It's easy to just spectate and not think much of it, but when I was on the platform, all I could think was how grateful I was. If TECT hadn't funded it, me and so many other incredible athletes wouldn't have gotten the chance to lift at such an incredible venue. And this Nationals with the funding was a big step for us and weightlifting going forward."

To view highlights from the event, watch it on the Sky Sport Next YouTube Channel by searching Olympic Weightlifting National Championships.

I live in the Mount and knew nothing about this.