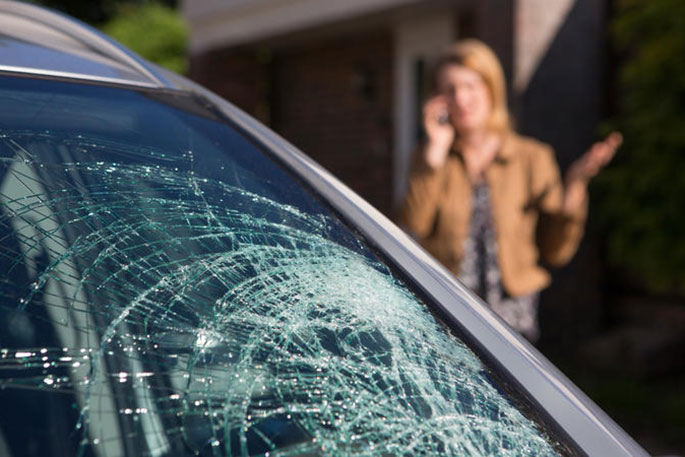 Coromandel locals and holidaymakers alike are getting fed up with number of times their car windscreens are being smashed by pebbles and stones that are flicked up from loose road surfaces.

One motorist had three windscreen cracks in a single journey, others have had the glass smashed on the way home from getting the previous day's cracks fixed.

And they want something done.

Tairua local Neisha Rhind says the problems started about three-and-a-half years ago. Since then, her husband has had to replace his windscreen six times.

All those incidents were the result of loose roading material on State Highway 25, between Kopu and Tairua, and the cost is starting to stack up.

"It's about $3000 a windscreen 'cause the type of car that he has has all the sensors and that sort of thing in the windscreen, so they have to be recalibrated. It's not just a simple repair so, yeah, it gets really costly."

It's becoming the norm for vehicles in the Coromandel to have cracked windscreens, she says.

"Any car that will come into contact with any other vehicle on the road, chances are you're going to get a chip.

"I think we need the cars to be observing social distancing again."

Glenbrook man Cameron Thompson was driving his brand-new ride on the Kopu-Hikuai Road to Tairua when he was made all too aware of the Coromandel's windscreen dilemma.

"[There was a] group of cars and I remember there was a truck but I didn't see the rock coming or anything. It just went 'bang'! And cracked the screen."

When he investigated on social media. he discovered that his experience was far from unique.

"There seemed to be a couple of hundred [motorists] by the sounds of it," he says.

"If there was only a couple of one-off occurrences I'd think yeah, that's alright. But given that there were quite a few cars and probably more than we know about, it's not really good enough."

Jade Chauval was heading to work south of Tairua a couple of weeks ago when she had a different but no less frightening encounter with the road works.

"I was already going pretty slow, but there were no cones or signage out on the road," she says.

"I kind of hit the road works and spun my car 360 [degrees] around a couple of times and ended up in the flax bushes on the other side of the road on top of a stoat trap."

Waiuku woman Fiona McAllum was on a similar section of the state highway when a loose rock blasted into her windscreen.

"This truck came towards me, he wasn't speeding but I think it was just the size of the truck and 'boom'! Straight into my windscreen."

She posted about her experience on the Tairua Chitchat Facebook page and was astounded by the number of people who had similar stories.

"I got a huge response - 121 [replies] at this stage and some of the posts were about multiple windscreen damage.

"I also think the contractors should show some responsibility. I feel for people who don't have windscreen insurance or car insurance - they must be hurting like hell."

Tairua woman Gail New doesn't bother getting her windscreen repaired for just one chip these days - unless it's really impairing her vision or the car's up for a warrant of fitness.

"In the last four or five years, my husband and I have always had to replace our windscreens when the road works are finished because of all the chips we get and we're just getting really tired of it," she says.

"Last week I got three chips in my windscreen - brand new windscreen - from one direct trip from Tairua to Thames.

"It's just really annoying and it's not fair. You know, every year before Christmas the windscreen repair place is inundated with cars."

Sure enough, Shawn Evans who co-owns the Gateway Glass stores in Thames, Whitianga, Tokoroa and Rotorua says things have been very busy indeed.

"Not just our own businesses but talking to businesses around the place at the moment, there seems to be lots more vehicles on the road now," he says.

Evans says it would be wrong to place all the blame for the influx of smashed windscreens on the road workers, who have faced massive disruptions this year due to COVID-19.

"Traditionally, a heck of a lot of roading gets done around that March, April period and it didn't happen this year, of course.

"So the roads have gone through winter without the patch-ups and repairs that should have happened earlier on in the year and they've got worse.

"So we're seeing an increase in roading now with seal being dropped and what-have-you, which obviously is contributing to more windscreens getting damaged."

The Transport Agency says in a statement that spring and summer are the best time for resurfacing roads and this, unfortunately, coincides with higher traffic volumes.

For 24 hours after a site has been sealed and before it is swept, it operates under a 30km/h speed limit.

The agency's contractors are working hard to ensure state highways 25 and 25A are sealed prior to the start of the holiday season, the agency says.

Are we still allowed on the roads without insurance. It should be compulsory like Aussie. The big factor here is speed. If Chewie was having rocks kicked up then others were speeding through roadworks. Drive to the conditions. Accidents will happen but but most are avoidable. Thanx for being responsible Chewie and having insurance.

I drove to Taupo a few weeks back. I never follow closely to other cars, but on coming traffic covered me in rocks. Not stones, but rocks. Insurance is now paying for a complete repaint of the front half of the car (bumper, front guards (over the wheels), and the bonnet needs panel beating to get the dents out of the panel. I also just got a new windscreen to repair all the cracks from this trip. Wonder if this virtue signaling government has considered the environmental impact of new windscreens, and painting cars all the time?