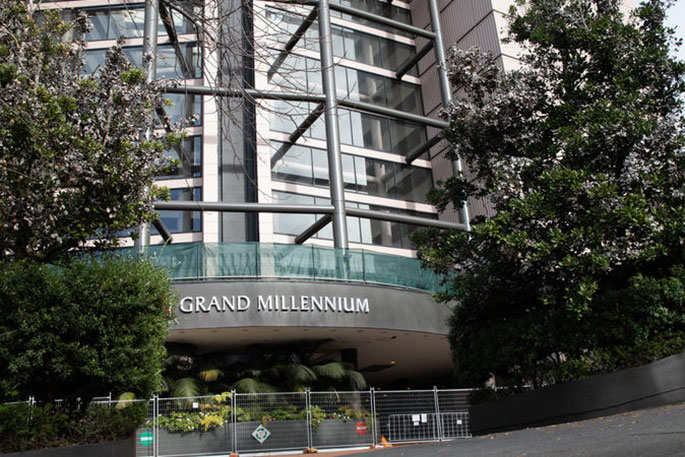 The Grand Millennium Hotel, which is being used as a managed isolation facility, in Auckland. Photo: RNZ / Dan Cook.

The country's 32 managed isolation and quarantine hotels are costing taxpayers more than $2 million a day, and due to go over budget before December 31, figures provided to RNZ show.

Cabinet is due to consider long-term funding options for managed isolation and quarantine before the end of the year.

The government is likely to recoup only about three per cent of what it's spent since August, when it started a 'pay-to-stay' scheme for short-term returnees.

More than 75,000 returnees have passed through the country's managed isolation and quarantine hotels.

Figures from MBIE show each stay takes more than $6000 out of the $499 million the government set aside for the system this year.

MBIE took charge of managing the isolation and quarantine system in September and spent $131 million in two months, leaving $121 million remaining by the end of October.

That means it is on track to go over budget before the end of the year, because it's spending about $2.4 million a day.

To put that in perspective, it's less than the country's prisons operating budget of about $3 million a day, but more than a government department like DOC, which runs on about $1.8 million a day.

"They would dwarf the price that we're talking about, in terms of the MIQ stays. Even the direct costs - I hate to imagine what one night in ICU would cost the government, and that's only the immediate, direct health cost," he says.

The MIQ money is coming almost entirely from the public purse, despite a fee scheme that began in August.

People returning to the country for less than 90 days are liable to pay $3100 per person, plus $950 for each additional adult and $475 for a child - less than half the cost of their stay. 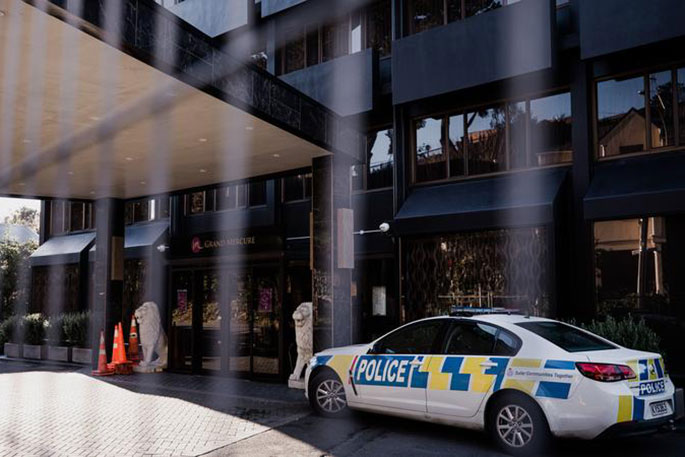 Police at the Grand Mercure Hotel in Wellington, which is being used as a managed isolation facility. Photo: RNZ /Dom Thomas.

That means about $4.9 million will be repaid for those six weeks, about three per cent of the total cost of accommodating 27,800 returnees during that time.

A statement from the office of COVID-19 Response Minister Chris Hipkins confirms Cabinet will consider funding for MIQ facilities before the end of the year.

The intention is to provide a longer term arrangement in 2021.

"For those people who are coming home effectively for a holiday or for commercial reasons, or for reasons which aren't about coming home permanently or there's no humanitarian justification, then I think there's a fair case that more could be charged for quarantine.

"Because otherwise those costs just fall on the taxpayer."

Gillespie will like the government to consider different managed isolation models for different budgets, and thought the private sector could help.

"So long as the rules are strict and adhered to with great rigidity, and that is enforced. I still think having the military involved is correct, but whether we could have a cheaper budget model through the private sector is something that should be looked at.

"I think increasingly you're going to have to start looking at that, like if there's debate about whether you want to bring students back into the country."

Despite the government giving the thumbs down to private arrangements in August, Auckland economic development agency ATEED has continued to push for them.

It's spearheaded a group of business leaders, who chief executive Nick Hill said were in ongoing discussions with local and central government about expanding managed isolation.

Their ideas include a priority framework for people whose presence in the country would drive economic recovery.

"The private sector is keen to collaborate with government to enable greater economic activity without compromising public health," he says.

You are right that MIQ funding by the Taxpayer should stop. Any Kiwi who has gone overseas and now wants to return should be prepared to pick up the full cost of their return. (If there are special circumstances, there should be a mechanism to allow them to make a case, and a decision can be made.) Your idea for a shutdown over Xmas is understandable, but it means that border staff get a break, at the expense of people wanting to return for Xmas. Again, if they pay the full price of MIQ then we can’t reasonably object. (Border staff will be paid the requisite overtime and that is part of the job they signed up for.) Professor Gillespie is advocating a "tiered" cost depending on who is returning; ATEED wants similar so that "desirables" can be imported. The Ateed idea puts money before safety. Hope it fails.

It is about time funding for MIQs stops!! It is not fair on the NZ tax payer to continue funding this scheme. The people who want to return to NZ, after visiting those green pastures, should be paying 100% of the costs. There has to be a line drawn somewhere because the country does not have an open cheque book. To only recover 3% of the costs is a disgrace!! We shold also be closing the borders from the 1sat December and reopening them on the 1st February to ensure COVID is not in NZ over the Christmas and holiday period. A shutdown will also allow the MIQ staff to have a well-earned break with their families.