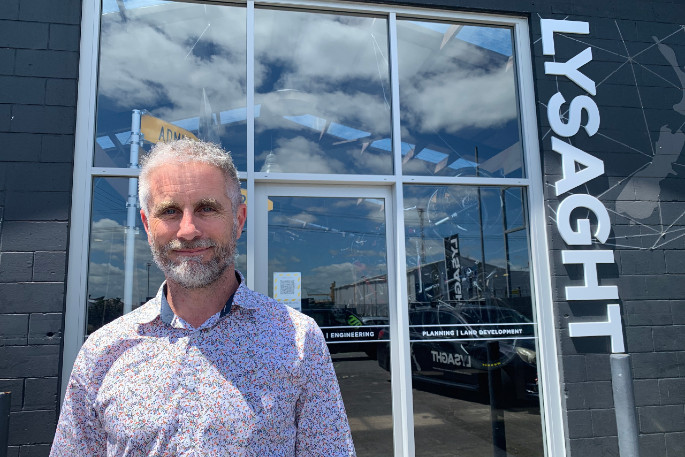 Some Totara St businesses approached by Tauranga City Council staff about the proposed cycleway say they felt their submissions were not included in the information given to councillors.

Safety upgrades were approved for the Mount street following the death of a cyclist in May and a faal scooter crash in 2018. Read more here.

“I made a submission per the original requirement,” says Mike Stott from Lysaght. “My submission was that I won’t use it.

“There'll be a lot of people still using Totara St in its normal format. Council will have to have their PR machine ready to battle all that people that go: ‘you just spent whatever the amount of money is and it isn’t working’.”

As a commuter, Mike likes to bikes to work and is also a recreational triathlete.

“I train during the week and on the weekends. So I want the shortest, fastest route. The original proposal has cyclists crossing over Totara Street. And then there’s five or six pedestrian crossings where I'm supposed to get off my bike and wait my turn to cross over.”

He’s not planning to do that.

“I can ride down Totara St legally and safely without having to give way to everyone else on the way there but work with the traffic,” says Mike.

As a land development consultancy business, Lysaght presents detailed design and analysis documents to Council on behalf of their clients, which includes consultation with the public and neighbours for resource consents to be issued.

“We got very little documentation from Council on this [Totara St cycleway]. It’s a complex situation and it hasn’t been very well articulated in the documentation,” says Mike.

Carter's Tyre Service, on the corner of Hull Rd, was told back in March about the upcoming changes including losing the use of council land that extends from their forecourt. 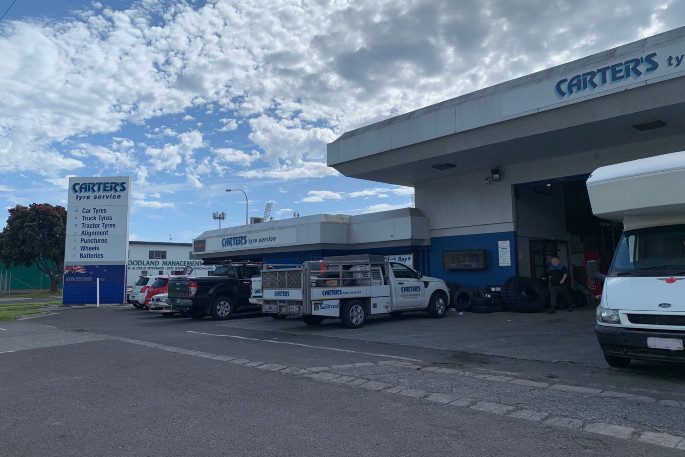 “We were given a schedule in March that they were starting at the Mount first and by November they would be here. They marked on the ground about three months ago where the cycleway was going to go.”

Uriah says the business was faced with either having to move or utilise the space they have.

“There is no more land left in Tauranga so we have to utilise what we have here.”

Brian Grey at Decoro Fishing had a visit from council staff about three months ago.

“I was vehemently opposed to their proposal which was to put two extra sets of lights into Totara St and run the cycle lane on this side,” says Brian. “I said: ‘mate Totara St doesn’t need more sets of lights. It needs less. Cyclists won’t use it because it’s a shared cycleway’. 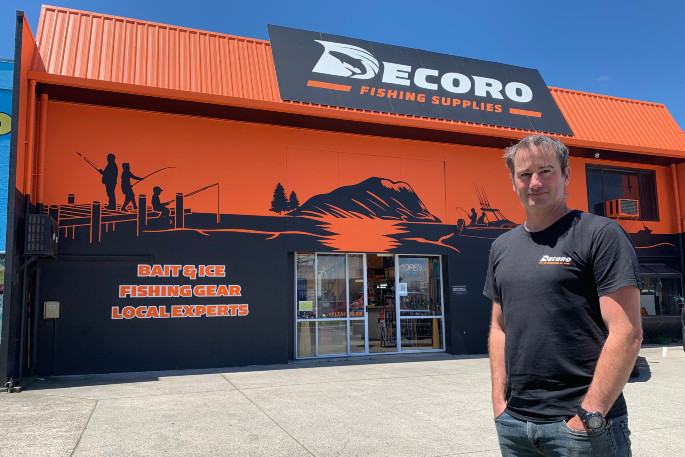 “I’m a cyclist and I know for a fact that I would never use it. Because you can run over pedestrians. And you're doing 50 km’s an hour on a bike anyway," says Brian.

Brian says the correct solution would be to have a dedicated cycleway on the western side.

“On or off road it doesn’t matter, whatever is safest. With two-way probably off road.

“To have a cycleway on this side run through carparks, in behind trees, over judder bars and in amongst people and having extra crossings on other roads that are just as busy and extra lights on Totara St makes no sense.” 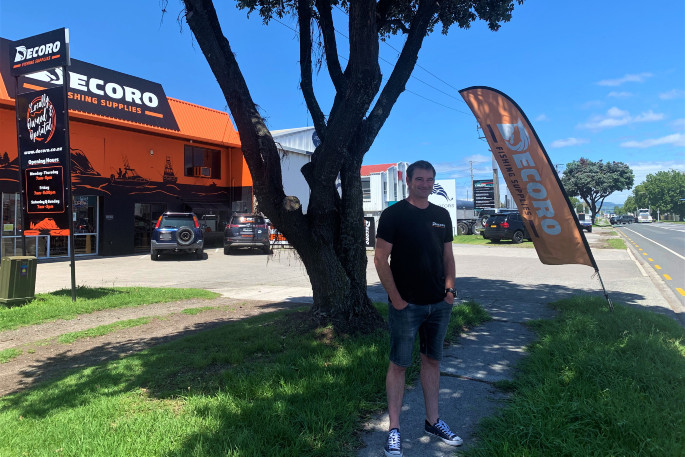 Business owners along the eastern side of Totara St say they were visited by Council staff about three months ago, with painted marks put down to show how much space the cycleway would be using.

Brian learned this week that none of the information he gave to council staff was passed on to councillors.

“They met with us and took notes in good faith and none of that information has made it to the councillors to help them with the decision.” 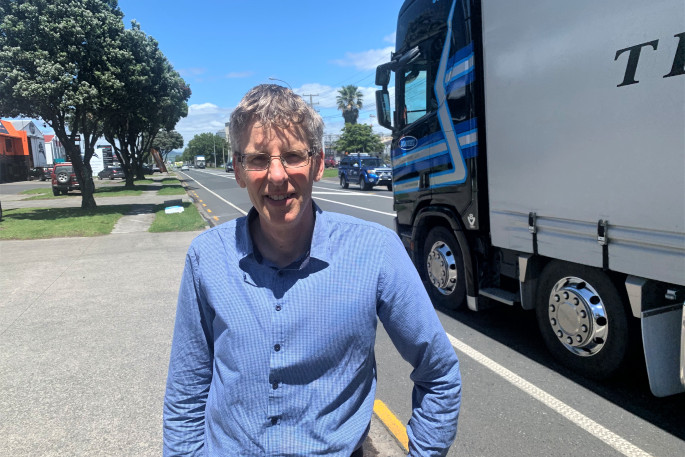 Glen Crowther at Totara St. The pohutukawa trees, footpath and grassed area will be removed to make way for the new cycleway.

Glen Crowther from Sustainable BOP says that a lot of people thought the Council cycleway solution was predetermined and that city councillors were not given enough time to study the information.

“Council did seem determined to get the $9 million option signed off this week, but the tricky thing is that the councillors were presented with a whole stack of information at the end of last week and had to sift through all that plus the feedback from various people in the community,” says Glen. 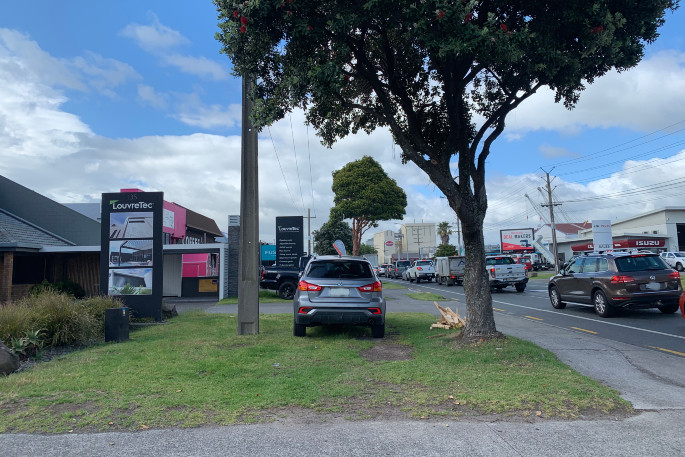 The businesses along the eastern side of Totara St have vehicles coming and going daily from multiple driveways.

Mike believes the cycleway should be on the western side of Totara St, and that the amount of vehicle interactions going in and out of businesses on the eastern side hasn’t been fully scoped.

“I have serious concerns from a safety point of view for the part from Triton to Hull Rd which is very busy,” says Mike. “There's a lot of behaviour modification required from all parties and they haven't really talked about how many small vehicle movements are in and out of there. I suspect if you combine them with the heavy goods, they well exceed the western side. But they said the western side has been a ‘no go’ because there's too many heavy vehicles crossing there.

“I think being on the road is dangerous, but you’re also properly interacting with the traffic. And that's that bold aspect of being wearing bright stuff, being here and not hiding. Someone turning left into a driveway is thinking all sorts of things but not thinking about someone five metres away on the kerb.” 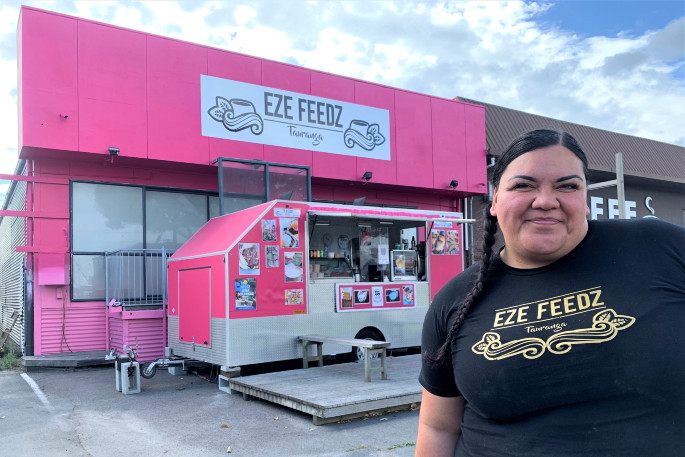 Jaz Hayward who owns the pink coffee food trailer Eze Feedz was told by Council four weeks after the launch of her business on September 1 that they were taking 44 square metres away from her frontage, leaving no available parking for her patrons.

“They came on October 29 and sprayed the ground to show where they are cutting and said they were having a vote the next day. I rang her and asked what was the decision and they said they were going ahead.” 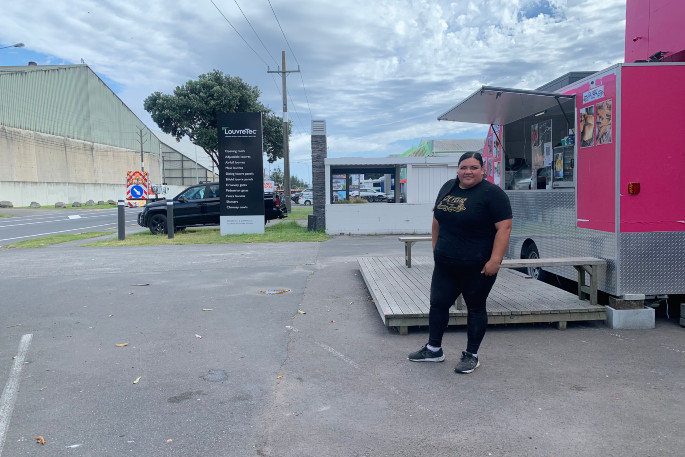 The toe of Jaz's right show marks the spot Tauranga City Council staff told her a few weeks before councillors voted that the cycleway area would come to.

“The middle stretch between Triton and Kawaka is the big challenge,” says Glen. “The unanswered question is why the better but more expensive option costs $11 million for just one kilometre of cycleway from the corner of Triton Ave to Kawaka St. However they never talked about that other option.

“Overall, the key issue will be how quickly they move on the bigger project that will sort out this area for all users, including freight, motorbikes, and cyclists who keep using the road. Meantime this temporary shared path will alleviate part of the problem for some of the people. It just needs a more holistic solution in place as soon as possible.”

When is this council going to listen to its ratepayers and apply common sense to road planning instead of listening to your employees that think they know best, you only have to look at changed roading to see these people are make too many mistakes.

The bike riding greenies seem to rule tauranga. Flow of traffic, business means nothing. A VERY few bike riders run the city. They destroy the city piece by piece. How to stop them ???

Next road up is a very quiet street, fantastic for cycling, is very wide. Being on a bike going a little more to reach this is not much, its way safer. Build a track that cyclists want to use rather than having all modes of transport on one street with Industrial! but of course its consultants that know best and council that are stuck in the middle of a war between everyone...lol

Has anyone the figures on how many cyclists use Totara Street on a given day? If not perhaps someone does the tedious task of actually counting them and providing this to the council. We will then see that this is a case of the "tail wagging the dog".

...OMG even removing protected trees and so many $$ for the handful of cyclists who are happy be the sound of it to use another and safer route anyway...totally unbelievable, but sooo TCC..!

An easy solution to make sure cyclists use the new path, instead of using the shorter route along Totara Street, is to ban cyclists from using Totara Street and to fine them if they are caught doing so. This should force them to use the path they are all crying out for. As others have said, just a knee jerk reaction.

Waste of time and money

How many cycle lanes ( not country cycle paths) are built and very rarely used. This has been a knee jerk reaction over one unfortunate death. We don’t change our roads every time someone gets killed. It take years before any accident hot spots get any changes.

Just like everything else they consult the public about then... Pre-determined (ridiculous) decisions and disingenuous engagement with the public to get projects over the line.

Council consultation is a SOP!

As I have said for a long time, the so called council consultation and requested ratepayer input is NOTHING more than a SOP ……………… The faceless council bureaucrats – who it seems you will NEVER learn the names of, have already decided what they are going to do with the Mount Streets - Just like the one way system - and it’s another case of to HELL with the residents and business – ITS ALL ABOUT THE BIKE MOB !!! Oh, and the Councillors will toe the line of the faceless council bureaucrats who don’t give them ALL in information. Who runs the Council? - certainly NOT the elected councillors who a supposed to be working for the ratepayers/business/residents.