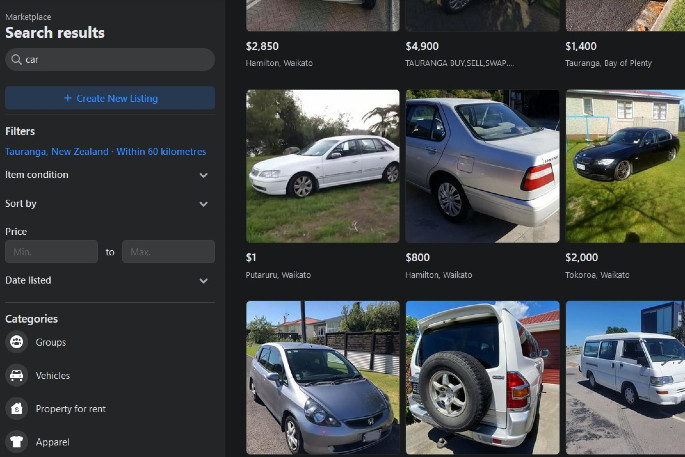 A selection of cars for sale in the Bay of Plenty on Saturday morning.

Police are warning the public to be aware of a common scam involving the purchase of vehicles being sold on Facebook marketplace.

In the past 12 months, Police have received more than 50 reports from vehicle owners who have been scammed after listing vehicles on this online platform.

Nine people have been charged with dishonesty offences in relation to these cases as Police continue to investigate these complaints across Tāmaki Makaurau.

"In these scam reports, members of the public report that a person has purchased a vehicle from them after they listed it on Facebook marketplace," says Detective Senior Sergeant Callum McNeill.

"The purchaser will pay the owner by cheque and the funds will then show as “pending” in the seller’s bank account.

"The cheques are subsequently dishonoured or reversed due to insufficient funds three to six days later."

Detective Senior Sergeant Callum McNeill says that by this time the vehicle is already in the possession of the scammer, who has typically on-sold the vehicle to another member of the public.

"The victim will attempt to contact the scammer again, however the offender will block the seller or deactivate their Facebook account so they cannot be contacted."

Detective Senior Sergeant Callum McNeill says Police want the public to be wary of the risks of selling vehicles on unregulated websites such as Facebook marketplace.

“Police have noticed a significant increase in reports from victims in these scams in the past year and we take these matters seriously.

“We want the community to be cautious when accepting payments by cheques," says Detective Senior Sergeant Callum McNeill.

"You should not hand over possession of your vehicle until the payment has been cleared and is no longer showing as pending in your bank account.

“We would also recommend that people selling vehicles online use regulated marketplace websites such as Trade Me.”

Anyone who has been a victim of this scam should make a report to Police.

You put your finger on it when you said not to hand over the vehicle until the funds have cleared.

Why would anyone take a cheque these days seeing as most banks no longer use them? Also why would you hand over the vehicle until the money has been cleared? Taking a large amount of cash can also be dangerous as the buyer might have friends who follow you and "mug" you before you can bank it. Finally be careful there are several more scams around that result in the seller losing their vehicle and money.