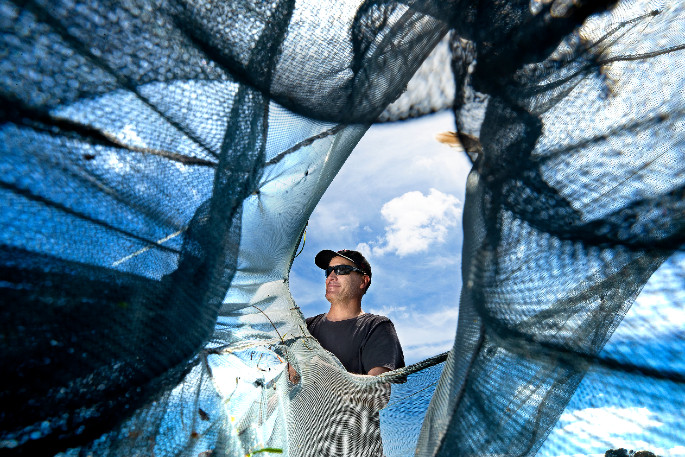 Habitat loss, pollution, introduced fish species and fishing pressure has led to some whitebait species being at risk or threatened.

Tauranga whitebaiter Des Ward has only been doing it for a few seasons but has already noticed the decline in whitebait numbers.

“On average, I would catch two or three kilograms but this season I’m lucky if I get a kilogram and a half.”

It’s a far cry from Des’ childhood memories in Whakatane where he and his family would bring in buckets of whitebait; a catch that Des says would be worth thousands in today’s market.

Des recalls whitebaiting in Whakatane a few seasons ago where he pulled in five kilograms of whitebait an hour. His partner then sold them on Facebook at $20 for 200 grams, he says it was all gone in a few hours.

Whitebait now goes for upwards of $100 a kilogram. The premium price has led to criticism that it’s encouraging commercial whitebaiting, which is considered to play a part in the declining numbers.

Whitebait is made up of six native species – four of which are at risk, declining or threatened. If allowed to grow, some of these species can grow to almost 60cm, while others can live for more than a decade.

“Our whitebait species are at risk or threatened with extinction. They travel through a largely unregulated fishery at the start of their lives and go on to live in habitats where bottom lines for pollutants like nitrogen and phosphorus are still not good enough.”

Today Des seems to have caught a feed but not much more. It’s a sunny day and he’s setting his nets on the Wairoa River close to State Highway 2.

Even if you’re not into whitebaiting the appeal of sitting on a riverbank in the sun is somewhat universal, but for whitebaiting success, Des says the best time to go is in the rain.

Along with the declining numbers, Des says the whitebait he does catch are bigger than what he would like. He says the larger whitebait are not as good for fritters and although they can be nice crumbed and deep fried, he would prefer to catch the smaller ones.

Des feels the biggest impact on the whitebait numbers is not from recreational whitebaiters like himself but from environmental changes to the river.

He says pollutants and the destruction of whitebait habitats are the biggest contributors to the declining numbers.

Department of Conservation freshwater manager Elizabeth Heeg says the threats to whitebait in the Bay of Plenty vary from river to river but could include draining wetlands, deforestation, pollution and irrigation. Along with loss of whitebait spawning sites, pressure from introduced species and fishing pressure.

NIWA’s freshwater fish ecologist Eimear Egan says there is lots of anecdotal evidence which suggests whitebait numbers are declining but currently there is no scientific research done to back up waitbaiters’ claims.

She says this makes it hard to know if whitebait numbers are actually declining.

Eimear says whitebait numbers vary from year to year and place to place across the country.

There are a lot of factors that can contribute to whitebait numbers says Eimear, it can be down to as little as rain and weather patterns.

“There’s a lot of potential drivers for increases and fluctuations.”

The Department of Conversation released a summary of submissions in October on whitebait management which showed strong support by both fishers and non-fishers for tighter rules.

Some suggestions made by DOC were shortening the whitebait season from finishing in November 30 to October 14, creating whitebait refuges, phasing out some whitebait fishing practices and phasing out the export of whitebait.

Des thinks that catch limits for recreational fishermen will not likely do much for whitebait numbers but agrees tighter restrictions around commercial whitebaiting would be positive.

Part of DOC’s recommendations is to phase out sock nets, traps, screens and diversions.

Des thinks the best way to protect the whitebait is by creating protected reserves where the fish can feed in protected habitats without the threat of fishing or changes to the whitebait’s environment. This is similar to DOC’s recommendation of whitebait refuges.

He says at the moment whitebait have to travel long distances up stream before they can rest and eat in a safe habitat.

“If you’ve got more areas like that, you’ll have more places to whitebait.”

Freshwater advocate Annabeth says it’s now up to the government to implement change if whitebait are to be enjoyed by future generations.

The West Coast whitebaiting season finished on November 14 while the rest of the country is in the tail end of the season, finishing on November 30.

immediate regulation, licensing, and enforcement. I know that’s not the Kiwi way, but apparently there are some who think its OK to decimate or exterminate a native species in the name of greed. It needs to be addressed and URGENTLY.

If you compare the white baiting to the early days of the 70-80s yes it’s definitely declined but what hasn’t changed. Ive white baited for many years from a kid to now (a big kid).If you spend time on a river you get to know it Went to go down what tide.I have never sold any White bait .I caught it for me and my partner and my mum and dads.Some years are better than others .I believe rain is important to their lifecycle and the dont run august - nov . They run when they want .i see in the tga harbour now they are running. The only really think declining is the whitebaiter themselves. Don’t believe everything forest and bird has to say ask a white Vader please they got just as many theories

Amazing that this bloke thinks it is OK to sell an endangered native species like this. Catch yourself a feed then pack up and go home. Try this with snapper etc and see what happens. There are so many people not working and doing this these days, no wonder they are in decline. Tax free gold I guess?

Good to see we only take what we need...

"bringing in buckets of whitebait" and "catching 5 kilos in an hour" - couldn’t possibly be greed and overfishing, must be pollution and somebody else’s fault!