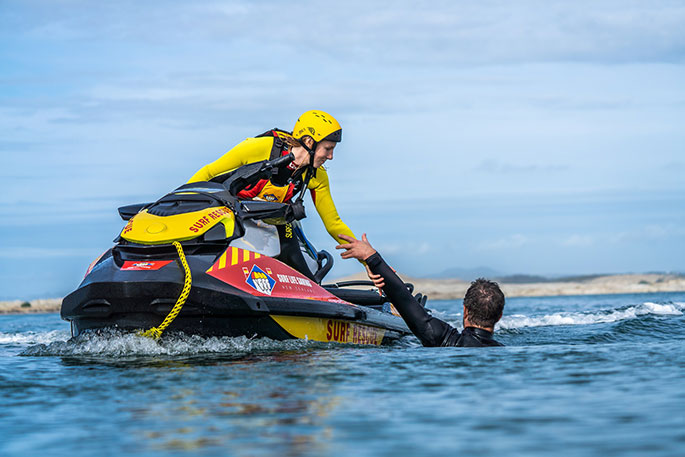 Rescue Watercraft in use by a volunteer lifeguard. Supplied photos.

For those working in the emergency services, saving someone with severe injuries is a task that requires plenty of precaution and careful manoeuvring. For Surf Lifeguards, water adds another element of complexity.

Kent Jarman (KJ) knows the scenario well. Volunteering as a Surf Lifeguard since 1966, he has performed several hundred rescues.

His work has seen him receive an MNZM for services to Surf Lifesaving, multiple nominations for rescue of the year, and the National Lifeguard of the Year award in 1988.

Earlier this year, KJ and six other volunteer Surf Lifeguards rescued a man who had suffered potentially lifechanging spinal and head injuries after jet skiing at Matakana Island.

KJ determined the RWC would be the best way to get immediate support to the patient.

“For this rescue, two key things about the Rescue Watercraft was the speed with which we were able to get to the scene and assess the situation, and the ease we were able to remove the injured patient from the water without compromising his severe injuries.

"This was borne out by the patient fracturing four vertebrae in his neck but suffering no spinal cord damage.”

With a surf of 1.5m, significant ocean swell, and with the man’s complex injuries, it took the Surf Lifeguards 45 minutes to get him back to land.

Their efforts earned them first place in BP Rescue of the Month for March.

KJ says like most things in life, there is no substitute for experience, and that is particularly relevant for being a good lifeguard.

“Some of my fellow guards joke that I have a reputation for attracting rescue situations, although they do not put it quite as politely.

"I think it is more about instinct and having a feel for what is happening on a beach at any given time. A vital element in being an effective lifeguard is predicting a rescue scenario before it happens.”

For water-related rescues, KJ says speed is the key, with their equipment allowing them to get to patients quickly.

“This was why I embraced the use of, initially IRBs and more recently RWC. Whilst RWC will not replace IRBs, they add an extra dimension to patrolling, and the hands of a competent operator are capable of doing things one would struggle to do with an IRB.

“Although a relative newcomer to RWC, I have already logged over 100 hundred hours. A couple of weekends ago we had 8 hours over two days searching for our missing swimmer. I would not have been physically capable of doing that in an IRB at my age, but an RWC affords a little more comfort.” 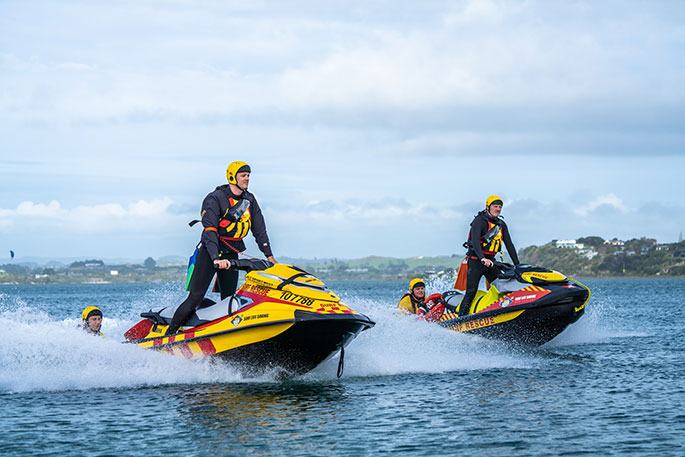 Rescue Watercrafts in use.

Chase Cahalane is the Regional Manager for Surf Life Saving’s Eastern Region, which covers the administration and management of the charity’s services across the Coromandel, Bay of Plenty and Gisborne areas. In the Western Bay, the Eastern Region office supports five clubs and an additional four patrol locations.

Chase says they are preparing for a very busy season ahead, with Kiwis set to travel to New Zealand holiday hotspots like the Bay of Plenty in droves.

“As a result, we are working hard to review our patrol delivery models to ensure that we have lifeguards on the beach when the community needs. In addition, we are ensuring our equipment is fit for purpose and deployed appropriately where it is needed most.”

To ensure the safety of everyone on our beaches during a busy summer ahead, Chase says it is critical the public seek out a patrolled location to swim.

“The BOP coastline can be very deceptive, seeming relatively safe, when in fact we have exceptionally strong currents, rips all along the coastline, as well as large inshore holes which can catch swimmers off guard.

“Surf lifeguards are trained to spot all of these hazards and are a fantastic resource for information on swimming safely. Always listen to the advice of these lifeguards, even if the conditions appear safe. Seek out lifeguarded locations, swim between the red and yellow flags, and please always remember to stay within your swimming capability – if in doubt, stay out.”

TECT has supported Surf Lifesaving’s work in our region since 1999, with $170,000 in funding going towards equipment and operating costs.

A further $57,640 was recently approved to support the running of the Eastern Region office, and to help purchase the key lifesaving equipment including an Inflatable Rescue Boat, All-Terrain Vehicle, Rescue Watercraft, and Rescue Watercraft trailer.

Chase says this equipment will be deployed along the Bay of Plenty coastline, utilised primarily at the satellite patrol locations where there is no Surf Club, such as Tay Street, Bowentown and Papamoa East.

“These items are needed for general patrol and rescue duties, but are also used where a Club may have had an equipment failure. Additionally, outside of the peak patrolling season, this equipment is used in delivering training and development courses throughout the Bay of Plenty.

“This grant is exceptionally timely as funding has become difficult in the current economic climate. We have been overdue to replace some of these key patrol and rescue items as they have aged beyond retirement, meaning we can no longer use them. Without this equipment, we would not be able to deliver patrolling services at a number of locations, so we are incredibly grateful to TECT.”

For information on the beaches you wish to head to this summer, visit findabeach.co.nz.