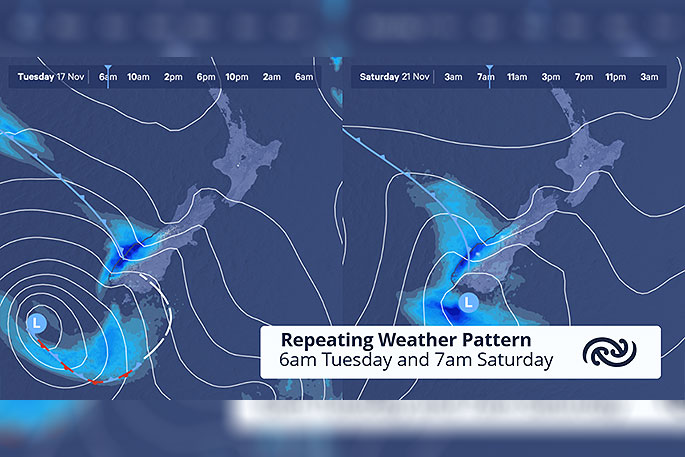 Saturday's weather is predicted to be very similar to that on Tuesday. Image: MetService.

This weekend's weather is looking similar to that of the start of the week.

Throughout this week, a passing low cooled temperatures back to their climatological average, after a burst of warm conditions, and brought a spell of rain or showers to all regions.

This weekend, MetService is forecasting a similar low pressure system to bring similar weather impacts: more rain to the west, strong northwesterlies to the east, and a temperature drop.

Before this new low arrives, most kiwis can plan for a settled and sunny end to the working week, although there looks to be some showers building in the central and southern South Island.

On Saturday, a deepening depression rushes past the lower South Island.

Much like the previous weather system it will sling a band of rain and strong northwest wind up the country, says the MetService.

"The western South Island will get a brief but intense spell of rain, while east of the Alps blustery and warm nor’westers swing around to strong and cooler sou’westers.

"The Black Ferns game in Nelson may unfortunately be a damp affair, as the rain looks to reach the area early evening."

Meanwhile, the North Island continues with mostly fine weather on Saturday, although winds will strengthen from Taranaki southwards, and late showers will also pepper these southern regions.

On Sunday a band of showers whisks through all areas.

“Urban centres are likely to see an hour or two of rain at most, although the wet weather could linger longer in the mountain ranges, so any weekend trampers need to be prepared for that, as they always should be," says MetService meteorologist Angus Hines.

By the time the weekend comes to a close, the majority of Aotearoa will have returned to settled weather.

"This ought to last through Monday but things look to change by the middle of the week, as a heavy rain bringer approaches from the Tasman Sea.

"The timing of the rain next week, and the areas most likely to be targeted, are still under scrutiny by our meteorological team, so keep an eye on the forecasts in the coming days to see if you will be affected."