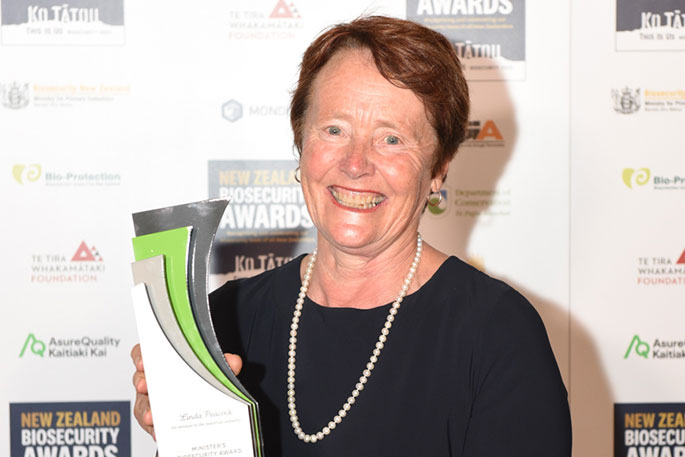 A Mount Maunganui woman is among winners of the New Zealand Biosecurity awards announced this week.

Kiwifruit Vine Health’s Linda Peacock was awarded the Minsiter’s Biosecurity Award for collaboratively working with growers and technical teams for more than 30 years from all growing regions.

The awards recognise organisations, volunteers, businesses, iwi, hapū, government, and tamariki around the country who are contributing to biosecurity – in our bush, our oceans and waterways, and in our backyards.

“Linda’s long-standing, passionate, empathetic, focused, and enthusiastic contributions to our biosecurity system won her a top accolade – the Biosecurity Minister’s Award – at the NZ Biosecurity Awards on Monday,” says a statement from MPI following the awards ceremony on Monday.

“For more than 30 years, Linda has worked collaboratively with growers and technical teams from all growing regions, taking science-based lessons and turning them into easily understood, practical solutions, which have saved vast numbers of kiwifruit growers from undue stress and loss.”

The New Zealand kiwifruit industry won a special award for its outstanding commitment to biosecurity.

“The kiwifruit industry has responded to biosecurity incursions with commitment, foresight, compassion, determination and – perhaps most importantly – collaboration,” says MPI

“It has built pathways to recovery that has led to a sector that is not only at the peak of the food and fibre sectors economically but is a powerhouse in biosecurity.”

"This mahi is fundamental to keeping our biosecurity system strong, and every day they are putting in the hard yards to ensure we continue to have a world-leading biosecurity system,” says head of Biosecurity New Zealand, Penny Nelson.

“These awards give us a chance to take a moment and honour the important achievements happening within our biosecurity system by individuals and organisations from all over New Zealand,” she said.

This year’s awards recognised more Kiwi kids taking part in biosecurity with the addition of the Kura (school) Award.

The new Kura award went to St Paul's Collegiate School in Hamilton for their agribusiness programme, which focuses on biosecurity in the primary sector and where pupils learn about the Queensland fruit fly, and Mycoplasma bovis.

Judging panel chair Dr John Hellstrom said the judges are always fascinated by the innovation displayed by each entry.

“It takes all of us to protect what we’ve got, and these people have taken protecting New Zealand into their own hands, for the benefit of everyone.”

Rotokare Scenic Reserve Trust of Taranaki – ambition and determination of the community to create and sustain a pest-free sanctuary.

Te Rawhiti 3B2 Ahu Whenua Trust of Northland – pest control and assisting with native bird re-locations in the Bay of Islands.

Thomas (Tame) Malcolm of Te Tira Whakamātaki and Te Arawa Waka – more than a decade’s experience – and commitment – in environmental management roles across the country.

Linda Peacock of Kiwifruit Vine Health in Mount Maunganui – worked collaboratively with growers and technical teams for more than 30 years from all growing regions.