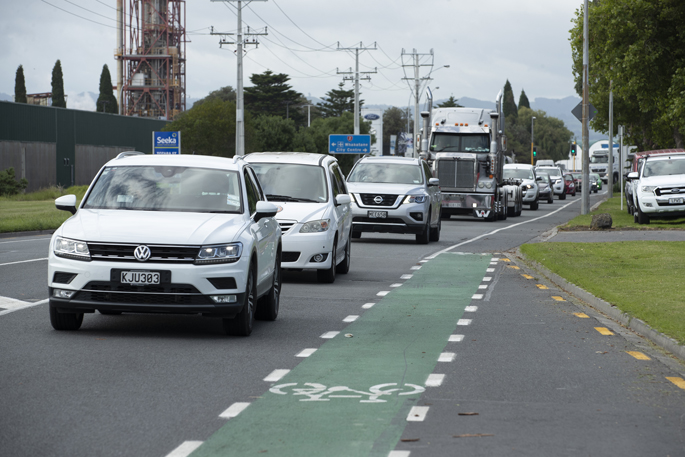 Safety upgrades have been approved for Totara Street in Mount Maunganui.

Calls for safety improvements were made following the death of a cyclist in May. There was also a scooter fatality in 2018.

The main goal is to make Totara Street safer for people who walk and ride bikes, says a statement from Tauranga City Council.

“An independent risk assessment shows the risk of serious injury or death for individual vulnerable road users is higher on Totara Street than on a typical road with similar volumes of traffic and of similar length in New Zealand.”

Council is planning a 3m wide shared path between Hewletts Road and Kawaka Street (eastern side).

A separated cycleway between Kawaka and Rata Street (Port side) will give people on bikes more opportunity to ride off the road, away from heavy vehicles, says a council spokesperson.

The design includes intersection upgrades and a new signalised crossing near Kawaka Street.

“The immediate priority is to make Totara Street safer, which is what the shared path and cycleway will achieve.

“It won’t please everyone and it’s not a comprehensive solution for the Mount Maunganui area, but it’s a safety improvement that can be made now.

“Longer term planning for Totara Street will continue. This planning is complex and it would be several more years before anything could be constructed.”

The aim is to start building in April 2021, with a construction timeframe of about seven months.
The final details of the design will be finished this year.

Council will continue to work with the locally affected Totara Street businesses and stakeholders to discuss their needs around property access and parking.

“The design team are nationally recognised safety experts who have been heavily involved in developing the Christchurch City cycle network,” says Council.

“They understand the issues and complexities of building cycleways in heavy industrial areas and they’ve seen how cyclists interact with these types of environments.

“They appreciate what works from both a vehicle user’s and a cyclist’s perspective.
“One of the challenges for this project has been how to get people safely from the harbour bridge pathway on the western side of Totara Street to the new shared path on the eastern side.”

Council says the updated design aims to make it easier for people to cross at the main Hewletts Road intersection, instead of creating a new crossing point further along Totara Street.

A traffic light will be added at the left turn slip-lane into Totara Street, which people can activate to cross safely to the main intersection crossing point.

This is option is supported by Waka Kotahi NZ Transport Agency.

Below are some questions council has anticipated and provided answers for:

It might take a bit longer to drive over the harbour bridge at rush hour
Depending on how many people activate the new left-turn pedestrian crossing signal at Totara Street, people driving from the city might sometimes find themselves in longer queues as they approach Hewletts Road.

At worst this could mean a 1.7 minute delay if the pedestrian crossing lights were to be triggered at each change of the lights during the highest peak hour traffic.

Although 1.7 minutes can seem like a long time, it needs to be measured against the potential for death and serious injury that the project is trying to prevent.

Modelling has indicated that the project is expected to increase the number of cyclists using Totara Street by approximately 40 per cent.

Most of these trips are expected to be between Mount Maunganui and central Tauranga. About 400 people cycle over the harbour bridge each day at the moment.

Waka Kotahi NZ Transport Agency will help pay for it

Council contribution to the project is $4.1M.

The remaining partnership funding of $4.284M will be provided by Waka Kotahi, bringing the total project cost to $8.4M. The business case will be considered by Waka Kotahi in December of this year.

More information is on the project webpage.

Councillors approved the updated design at the council meeting on Tuesday.

You can read the full Totara Street report in item 10.1 of the committee agenda.

The Council planning that you are suggesting will never happen Why, if it did, then 75% of the current council traffic planning department would be out of a job in three years - no more redesgns of redesigns to be done!!

@peecee09 Don’t you have any faith in this council? lol They aren’t idiots. lmao I’m sure they will do just fine. rofl

The long term outlook for Totara St has to be 3 or 4 lanes plus cycle and pedestrian lanes.Please Council ,plan this upgrade so it will incorporate with the long term fix plan and not need to be ripped up at a later date because it “won’t fit in with the new plan”