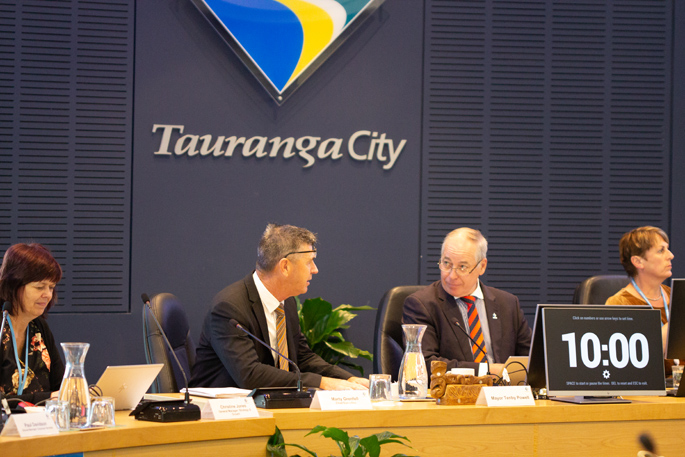 A report discussing issues of poor behaviour, lack of trust and inability to work together among Tauranga City Council has received criticism from some elected members.

The Review and Observer Team appointed to keep an eye on Tauranga City Councillors have recommended in a report that a Crown manager and observer be appointed to help address the “behaviour and performance issues”.

The team is chaired by Peter Winder, who says their work covers fundamental issues that are “really important to council and the future of this city”.

The observer team was appointed back in August in an effort to resolve ongoing elected member relationship issues.

The decision followed an emergency meeting to discuss the report from the Department of Internal Affairs. Read more here.

“Our sense is that collectively the understanding of governance roles across the current council is limited.”

The team has observed a significant breakdown in trust between elected members and a lack of collective responsibility to deal with poor behaviour, says Winder at a council meeting yesterday.

Governance training for elected members, a revised protocol for elected members asking for information and establishing a more effective and better resourced office for the Mayor were some of the other recommendations included in the report.

But councillor Steve Morris asked Winder if the report released Monday afternoon was a draft, claiming it had more than 70 factual, spelling and syntax errors.

“It was provided to us at 4.15pm on Monday and suggests some pretty significant changes to our democracy.”

Winder told Morris that it was the team’s intention for this to be a final report.

Councillor John Robson then moved a motion for the decision to be held off until Friday.

I wonder if Slim Shady is Andrew Hollis or Steve Morris? Or perhaps one of their partners? Weird that this group of politicians can attract super fans.

I imagine it was "Councillors Morris, Dawn Kiddie, Andrew Hollis, Kelvin Clout and Bill Grainger were in favour of this motion" - to stop the motion from flying through then and there as a ’NO’ for the commissioner! I am sure 10B doesn’t want the power taken from his grasp!

The ones that cause all the trouble now refuse to discuss it. Time to get rid of them but not with an election, with a commissioner.

Long overdue the council should have got their priorities of what they need regards training in the first months of being elected. Instead we have another delay . Councillors Robson, Morris, Dawn Kiddie, Andrew Hollis, Kelvin Clout and Bill Grainger watch out your procrastination vote is noted. You need to go.

So pleased we have Steve spell check on the job . It saves the unpalatable thrust of the report so the distraction is complete. Argue about spelling syntax and alleged facts instead of the real message. Brilliant . No wonder council is on the mat for not dealing with the real core business.

So turkeys don’t want to vote for Christmas how surprising. The sooner they get real the better. I see many comments on here about a vote of no confidence, a new election etc . However the problems we face with growth outstripping infrastructure, roading and money isn’t going away with should any ousting of councillors happen. We are heavily indebted and mistakes and loss of money hasn’t helped nor given confidence. Sad to say replacing or government commissioner won’t change anything unless government puts in considerable money. Join the queue for handouts. Meantime we ratepayers are frustrated with Greerton , rubbish, traffic, water , sewage etc who on earth in their right mind would want to stand for elections !

No surprises there then.

This is a clear message

to sack the lot, from the top down, and start again. Surely there is no other interpretation.

Why put off what is obvious to everyone else. The dogs can’t change their spots and neither can you rouse a dead dog. That is a fact of life - as is the toxicity and the disturbing acts and decisions being made by the present council. Surely they will not ignore the damning report and recommendations made by the four experts who we ratepayers paid over $300,00.00 to look into the problems. The rot started from the top. It won’t stop until the top dog is scuttled!

There’s that clear division of nonsense and breakdowns.