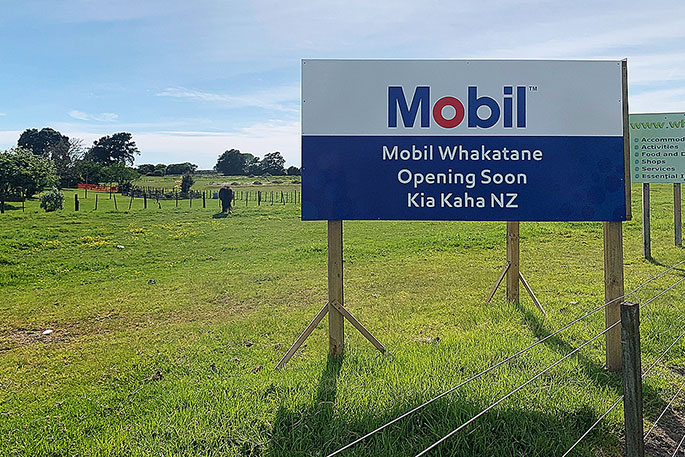 The court case is over a Mobil petrol station proposed for opposite The Hub. CHARLOTTE JONES / LDR.

Arguments over a proposed petrol station outside Whakatane have wrapped up in the High Court, but it will be some weeks before a decision is made.

The resource consent for the petrol station states it must use a driveway, which is part-owned by Lysaght Developments and Ngati Awa landowners, as access to the site.

The Lysaght Developments office is to the left of the driveway, the proposed site of the petrol station is to the right, and two Maori-owned homes are at the end.

The driveway will need to be kerbed and widened for use by large trucks.

The New Zealand Transport Agency has also imposed a clause in which a median barrier must be installed to prevent right-hand turns into the site from the state highway.

Lawyers for Lysaght Developments and Ngati Awa argued their clients should have been consulted on the resource consent due to the now-commercial use of the driveway, the cultural impacts, and potential safety issues.

Lysaght Developments’ lawyer Martin Williams says the council took a “contrived approach” to shut his client out of the resource consent process and it is “unreasonable”, “outrageous” and “in defiance of logic” his client was not consulted.

Williams says his client will be subjected to increased traffic on the driveway, an additional 90 vehicles an hour, and trucks would have to cut across the wrong side of the road to enter the site putting his client, its customers and residents at risk.

This situation was shown in diagrams submitted as part of the resource consent process.

Williams also says his clients now have access to their site impeded due to the median barrier and future plans showed the driveway might need to be widened further.

It would then encroach on the Lysaght office site.

In October, the council wrote to Gulati Enterprises advising it that written consent would be required from all seven owners of the driveway.

It then changed its mind, taking the view that the Resource Management Act could not consider property rights.

It emerged during the hearing that Ian Lysaght of Lysaght Developments had sold the block of land to Gulati Enterprises but Williams says his client “did not turn his mind” to what the site might be used for and assumed he would be consulted in any case.

Lawyer for the council Andrew Green says the council had no requirement to consult with neighbours as the petrol station was deemed to have a “less than minor” impact on them.

He says the petrol station is a permitted activity in that area under the District Plan and resource consent was required only for an oversized sign and the need to widen the driveway, which was a separate property issue.

Green says the council could not take into account people’s rights as property owners through the resource consent.

He says there is no “automatic in” to consultation because you are a property owner or held mana whenua in the area.

This statement drew gasps and laughs from the Ngati Awa contingent in the public gallery.

Green says the area has been zoned light-industrial since 1973. He says in 2009, an owner of two allotments wanted them rezoned to rural but this was opposed and subsequently overturned by Mr Lysaght, one of those now opposing the construction of the petrol station.

Green says despite this the council pre-empted neighbours’ concerns and imposed criteria upon the resource consent such as the need to install footpaths.

Lawyer for Gulati Enterprises Vanessa Hamm says all the council could assess through the RMA is traffic movements on the driveway, construction and the “risk of encounters”.

It could not assess property rights or the requirement for a median barrier on the highway.

She says the only factor that needs a deeper look is the risk of encounters, or crashes, because trucks could already use the driveway under its current classification and construction would only be short-term and not ongoing.

Hamm says the council used a consultant traffic engineer with 30 years’ experience to assess the driveway and this consultant, together with council traffic engineers, deemed the risk of crashes to be “very low”.

“So, in my view, council’s decision was correct,” she says.

“There has been reasonable consideration on all relevant effects … there is no reason to say that the decision of the consent authority was so unreasonable or unjust it needs to be set aside.”

Justice Christian Whata put it to Hamm that there had been “very light treatment” of the impact of trucks on residential use of the driveway and it would have been different if it had been an affluent community affected.

Hamm disagrees and says the engineer considered residential use of the driveway and had observed it for some time.

Justice Whata said that was the problem with not talking to locals.

Hamm’s colleague, Tim Conder, says property rights to the driveway sre irrelevant as ownership of the roadway came with owning an adjacent parcel of land and there were no means to exclude anyone from using it.

“While they are owners, they are not owners who can exclude others from that property.

“The consent does not impact on their property rights.”

Conder says this resource consent is only half the work needed to construct the petrol station.

Gulati Enterprises also needed to get permission from the Maori Land Court to upgrade the Maori-owned roadway.

He says it's likely that even if the council had consulted with neighbours, the resource consent would still have been granted because it could not consider the issues they raised.

Conder says it would therefore be redundant to quash the consent and go back through the process.

Te runanga lawyer Maia Wikaira says the impact on driveway owners had been well traversed but as Ngati Awa had not been engaged, there were significant effects that were not identified.

These included the significant cultural impacts of land confiscation on Ngati Awa.

She says Ngati Awa took an extremely active role in caring for its land as it had so much taken from it illegally.

Wikaira also says te runanga had a lawful expectation to be included in the process as it had received an email from the council stating the resource consent had been put on hold pending information and approval from Ngati Hokopu hapu.

The hapu then waited in good faith for someone to be in touch, however, this did not happen and the resource consent was granted without its input.

“They relied on that representation to their detriment."

Had that representation not been made, the hapu and iwi could have petitioned the council to decline the resource consent.

Justice Whata said to Green that the council needed to be more careful with its communications, and he agreed.

Green says the council would have informed te runanga bar for the interruption of COVID-19 and a key staff member falling ill.

He says the council has since apologised to te runanga for the omission.

An affidavit from the Te Hokowhitu Marae delegate read aloud by Ms Wikaira described how the hapu and its landowners had been the sacrificial lambs for Whakatane's industrial development.

This included fumes from the mill, bioremediation dumped around its marae, workshops behind, “and now a petrol station".

Those living in homes off the state highway said they already suffered from traffic congestion at peak hours and the petrol station would make it worse.

Homeowners also raised issues with losing their existing rural way of life, described feeling "squeezed out" of their homes through encroaching industrial use, and raised issues about security, access issues and disturbance.