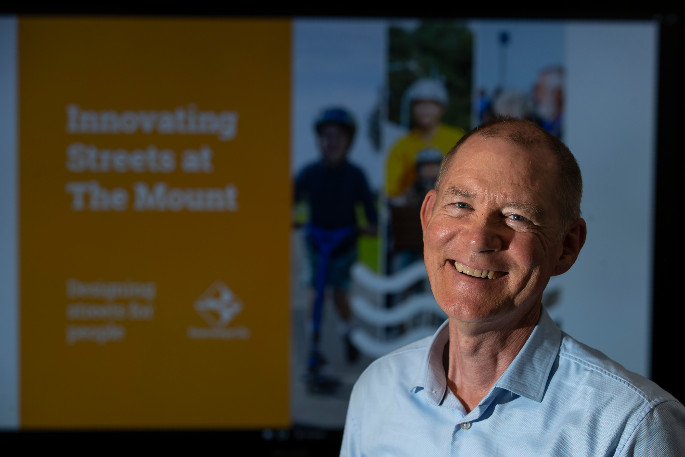 Tauranga City Council is moving to the next stage of the Innovating Steets at the Mount project.

And there are up to four proposed designs for each route.

Project manager Guy Protheroe says the majority of people who responded to the first round of feedback are in favour of trying something because there are safety concerns for people who are using something other than a car.

He says all of the ideas they are proposing are options and nothing has been finalised yet.

There has already been extensive community engagement, including an initial period of public consultation and the formation of a 28-member community design group.

That group has a cross section of people who live in the area, those for and against change and representatives from key groups and organisations like the Port of Tauranga, Tourism Bay of Plenty, and the disability and cycling communities.

“When we brought these people together, very few of them, if any, knew one another and they had a divergence of viewpoints.

“Over the three week period, those ideas all converged in many respects because people could see the merits of trialling something, or they can see the possible inconvenience to the locals as well.”

Designs include a two-way system at the Main Beach with a separate two-way route for bikes and scooters and angle parking along most of road. Alternatively, the area could be a shared zone with public space for people and closed to through traffic, with the exception of residents, businesses and emergency vehicles.

Analysing feedback from the latest round of community engagement and further consultation with the community design group will help finalise the designs that the mayor and councillors will vote on in February next year, says Guy.

The on-street trials will then be set up in March and further feedback will be sought once the public has experienced the changes.

Funding for the trial has mainly come from Waka Kotahi NZ Transport Agency, with 90 per cent of the $990,000 coming from NZTA and the other 10 per cent from council.

Learned that many years ago consultation is going through the motions not necessarily taking anything from it. Remember Greerton too

No-one trusts you with the cheque book anymore! No new projects! None! Zilch! Nada! Pay cuts for you all!

It is a shame they didn’t get public feedback when they built the fancy skateboard park in the old Phoenix Car Park downtown.

What ever you do don’t listen to the people responsible for the redesign of Tepuke. They have made a absolute mess of the place !!!