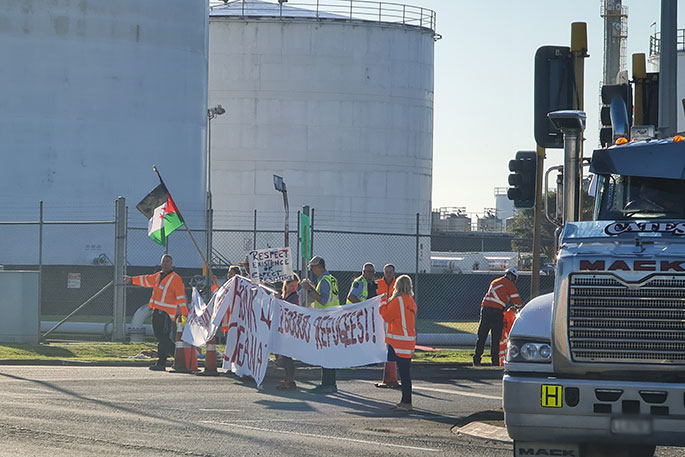 A group of protesters spent the morning blocking trucks from entering and exiting Tauranga company, Ballance Agri-Nutrients, due to the companies’ use of what protesters call “blood phosphate”.

The protesters blocked trucks from entering and exiting the premise, on Tasman Quay off Hewletts Road, but allowed cars to pass through the blockade.

Tīaho says protesters were standing in survival solidarity for the people of Western Sahara.

Western Sahara is a region predominately comprised of desert land that has phosphate and iron ore reserves.

It was a Spanish colony but since 1975 it’s been occupied by Morocco.

She says that the Prime Minister had promised action after visiting the refugee camps in Western Sahara.

“She’s (Jacinda Ardern) made promises to the people, she talked about Western Sahara in her maiden speech and now it’s 2020. There’s enough talk we need action.”

As well as the humanitarian concerns around the phosphate, Tīaho says the environmental impacts of the fertiliser is severe.

“The nitrous oxide that is emitted by phosphate fertiliser is 300 times worse than carbon dioxide.”

“Farmers need to be supported to move to regenerative farming.”

Ron Findlay came from Opotiki to protest, and says indigenous people are always pushed aside for economic interest.

“New Zealand is one of the few countries that has such a reliance on phosphate fertilisers.”

He says blocking the entrance to Ballance is a gentle reminder to farmers to make ethical choices.

Another protester, Jp Coquelet just learnt about the issue. He says he was shocked to learn about the phosphate.

“There’s nothing good about it, only economic interest.”

CEO of Ballance Agri-Nutrients Mark Waynne says the company is aware of the different perspectives of Western Sahara but has taken its lead from the United Nations.

He says management and directors visit Western Sahara regularly to evaluate its compliance with the UN and the companies own ethical criteria.

Head of communications at Ballance Agri-Nutrients Aimee Driscoll says the protests did not affect operation and the company was able to divert its trucks.

The action taken at Ballance is part of a nationwide protest, which includes blocking all Ballance and Ravensdown Fertiliser depots nationwide.

The protesters have since moved on from the Ballance entrance.

rent a protester out again. down to the dole office tomorrow