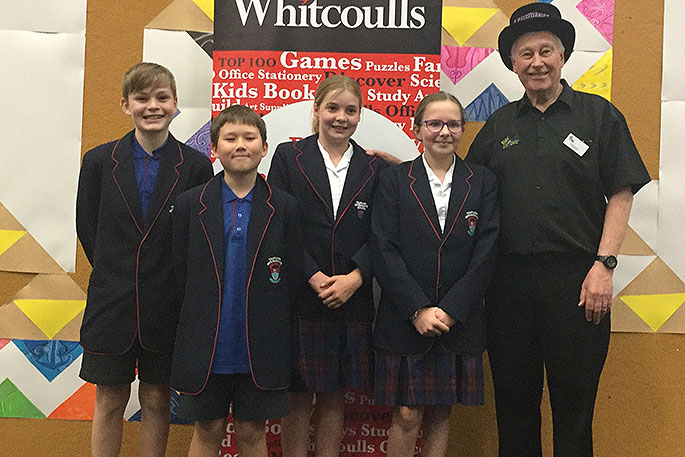 In a year where many events were cancelled due to COVID-19, Tauranga Intermediate School has come second in the Kids’ Lit Quiz 2020 New Zealand champions.

Despite multiple postponements due to COVID-19 lockdowns, and the cancellation of the world final scheduled for July in Hamilton, quizmaster Wayne Mills pursued with the competition, culminating with the national final in Wellington today.

Almost 1700 competitors took part in the annual event this year, aimed at encouraging children to read for pleasure, widening their range of books and to celebrate their literary knowledge.

Fifteen teams of four students aged 10 to 13 years pitted that knowledge against each other in the final with Havelock North Intermediate coming out victorious.

History was made on Sunday, with three teams tied for first place, and a sudden death play-off required to determine the winner.

“These intrepid kids put in a stunning performance. The atmosphere was electric, with total hush as the play-off unfolded,” says Wayne.

“We had an eclectic set of questions covering authors, titles, symbolism in literature, poetry and non-fiction.”

Wayne, who was made a Member of the New Zealand Order of Merit for his work with the Kids’ Lit Quiz and is a recipient of the New Zealand Margaret Mahy Medal for his contribution to literature and literacy, founded the competition in a Hamilton community hall 29 years ago.

It has since grown to include 11 countries, many of which held virtual competitions this year.

New Zealand teams have an impressive record on the world stage, winning five of the 16 international finals.

OECD research shows that reading for pleasure is the single most important indicator of a child’s future success. It’s an even more powerful factor in life achievement than socio-economic background.

“Reading also helps kids develop empathy and emotional intelligence, which is well documented as an indicator of successful relationships and success in the workplace,” says Wayne.

“Kids identify with characters as role models of behaviour, and the well-developed characters in books discourage stereotyping.

“So just by opening up a book there are worlds to explore. It’s absolutely no fluke that books are shaped like doors for that very reason.”

The event is supported by the Wright Family Foundation, Whitcoulls, LZR Books and Softlink.