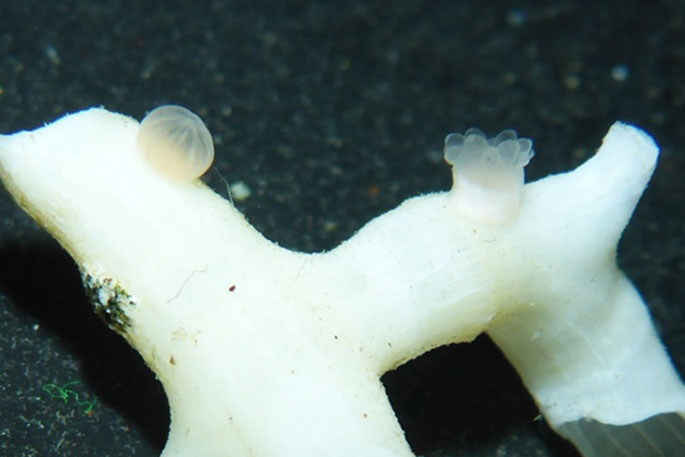 Baby coral which have settled on a coral branch and begun to grow. Photos: Supplied/Jenny Beaumont.

Small orange flecks spotted floating around in a respiration chamber at a NIWA laboratory have led to a discovery about the spawning habits of a deep-sea stony coral in New Zealand waters.

NIWA scientists collected colonies of the deep-sea stony coral, Goniocorella dumosa, from the Chatham Rise in June as part of NIWA’s programme to assess the resilience of corals to sedimentation.

The small orange flecks were spotted on the last day of the sedimentation experiment and turned out to be larvae that had been released from the mature coral polyps.

This coral species is prevalent throughout the southern hemisphere, but its larvae have never been seen before, says a statement from NIWA.

They measured about 1.1mm x 0.8 mm and were covered in small hair-like filaments called cilia.

The larvae have now been under observation for several weeks by NIWA scientist Dr Jenny Beaumont who has photographed and monitored the larval development.

Dr Beaumont says several have now ’settled’ by attaching themselves to mature coral colonies as well as to less expected substrates such as silicone tubing.

“The settlement has taken place within a few days, which is a contrast to other deep-sea corals, some of which can take months to reach this stage. It’s fascinating to watch and record their development as they form feeding tentacles and a calcified base." 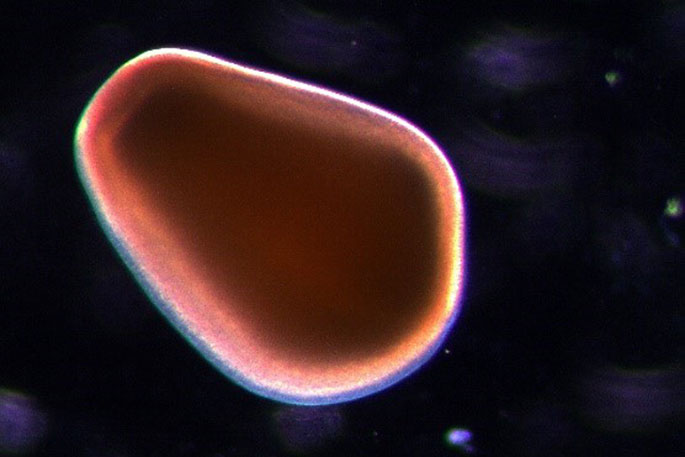 NIWA’s coral expert, Di Tracey, says being able to observe the larvae has changed the understanding of the reproductive process of this species.

Previous work on the reproductive ecology of New Zealand corals had indicated that G. dumosa were broadcast spawners, releasing large numbers of gametes which become swimming larvae or planular once fertilised.

These larvae disperse on ocean currents before settling from the water column and attaching to a suitable substratum.

However, the scientists say it is now clear that this particular species practises a method of spawning known as ’brooding’.

Brooders release larger but fewer larvae, which are thought to stay closer to their parent host than the larvae of broadcast spawners.

“This serendipitous science has greatly increased our knowledge of the life history of this hard to study and important deep-sea species,“ Dr Beaumont says.

That these corals are now known to be brooders may mean they have a more limited dispersal potential than species which broadcast spawn.

This could have implications for their recovery potential from human activities and therefore their management.