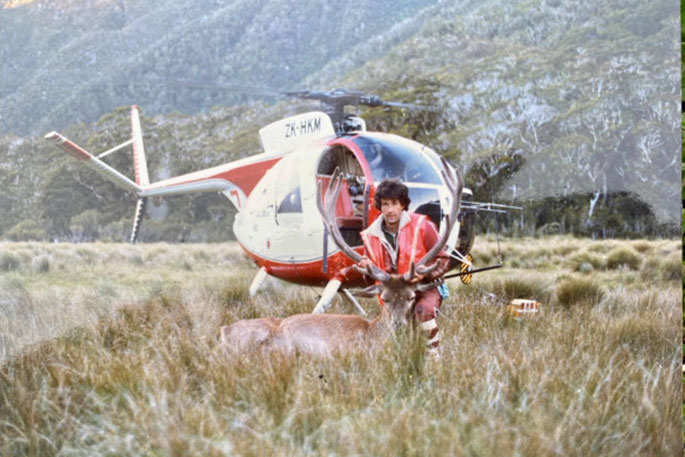 Jody Stent is “gobsmacked by the aroha and support” she received from different public servants, across three Government agencies, to find the exact helicopter accident site where her older brother passed away nearly 40 years ago.

Jody and her family are planning a small reunion next year and are hopeful they will be able to helicopter into the steep hilly crash site in Murupara to mark the anniversary of Richard (Rick) Stent’s death on August 1, 1981.

The helicopter pilot Boyd Gare who was flying the ZK-HQG Hughes 369 was a ‘good mate’ of Rick’s and also tragically died in the crash.

The crash was caused by a failure of the main transmission shaft, which was an unapproved ex-military component.

“Rick was only 29 and his death was a huge blow to our parents who were so proud of him,” says Jody.

" He was charismatic and had worked in deer recovery in Te Anau before pursuing his dream and gaining his fixed wing and helicopter licences.

"He had just started as a pilot in central Hawke's Bay and when his own helicopter needed repairs, he agreed to help Boyd out, as his shooter recovering deer, for a week or so.

“We will be asking a kaumatua from the local tangata whenua to say a karakia for our whanau, due to it being a significant and spiritual area."

Napier Police District Deployment coordinator Andrew Knox took the first call from Jody on November 2 and immediately passed it on to the Civil Aviation Authority (CAA) to help.

The CAA was not very hopeful of finding the exact crash site when it sent an email to its staff.

However, the very next day safety investigator Lou Child found the hard copy report on the library shelves which gave grid references to old Lands and Survey maps, located in the Digital Heritage Archive Library.

The reports dated back from before the time when the CAA was established in 1992.

The CAA decided rather than passing this technical information on; to go the extra mile and ask Land and Information New Zealand.

LINZ in turn directed the request to cartographer Graeme Jupp to translate the grid references into GPS coordinates.

Graeme came back with: “The grid reference of 225 602 places the accident site in the valley of the Whirinaki River, southwest of Paewhakataratara Ridge, 274 metres above sea level”.

He then provided the GPS coordinates which could be punched into any cell phone. The CAA is also providing the original accident report to the family this week.

Jody says she really appreciated the information and that a team of public servants had joined together to help her family.

“Please pass on my humble thanks to everyone,” she says.